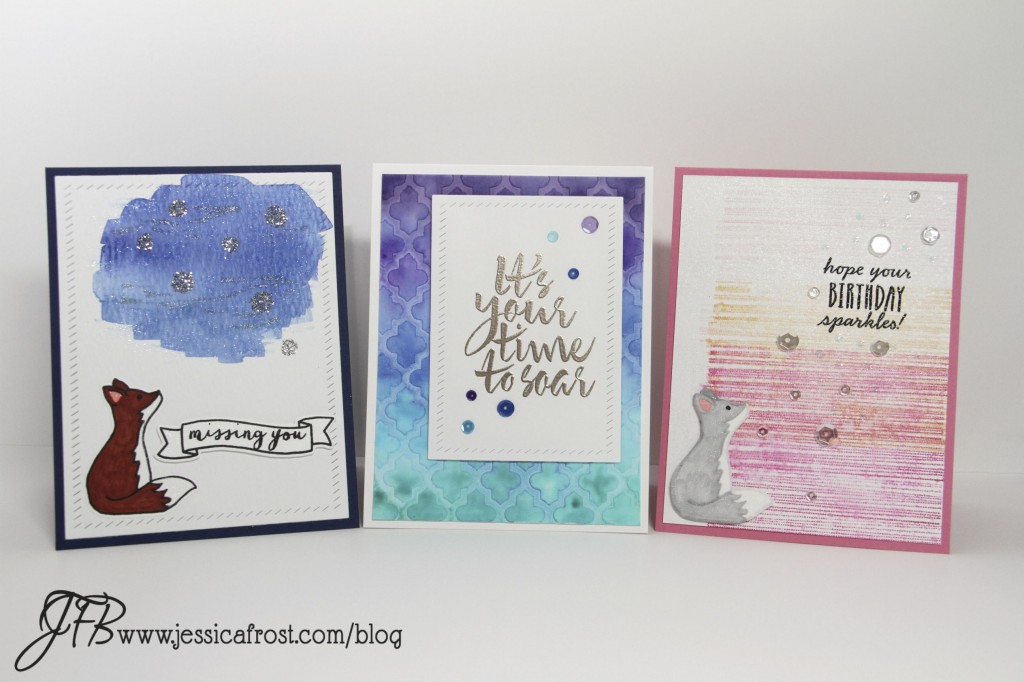 I recently received several stamp sets from Avery Elle and Papertrey Ink and it took me awhile to find time to play with them…but O.M.G. I LOVE these sets!  That fox…I want him as a pet.  Maybe I could dye Archimedes… 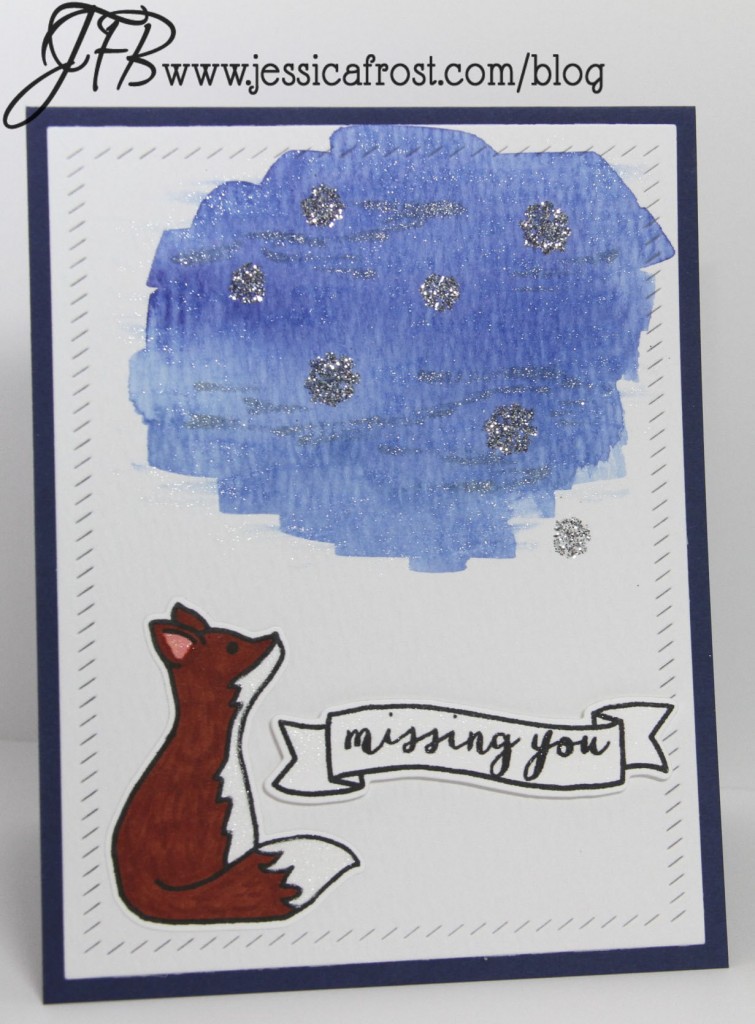 Anyway for the first card I used the Avery Elle More Stories stamp and die sets and the Finished Frames die set.  I started by using copic markers to color the fox and then using a zig two way glue pen to adhere white glitter ritz glitter to the fox’s tail tip and chest. 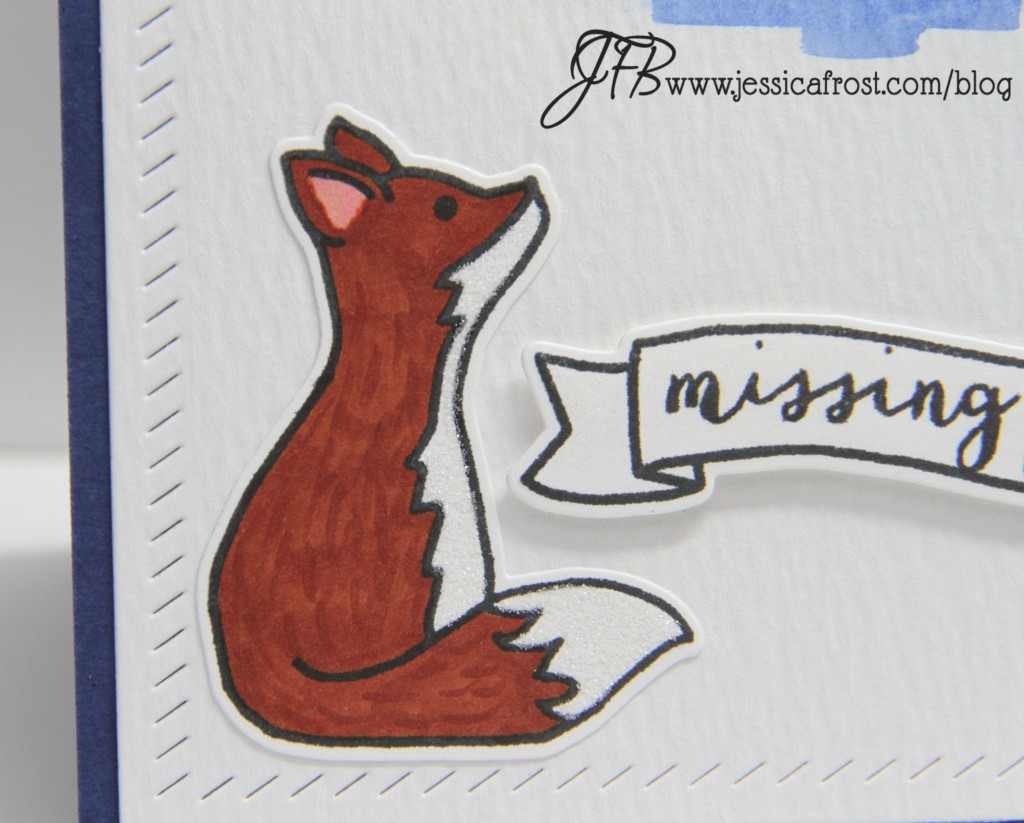 I took a 4″ by 5.25″ piece of watercolor paper and used the large frame from the Finished Frames die to add the cute border to the watercolor paper.  Then I painted the sky with Peerless watercolors.  I stamped the snowflakes from the More Stories set onto the sky and heat embossed it with sticky embossing powder and then silver stickles glitter.  I accidentally used my silver wink of stella glitter pen on the sky but then decided that it worked with the glittery snowflakes and selectively used it on the sky and then followed it up with the clear wink of stella glitter pen over the entire sky.  The sentiment and banner are also from More Stories and they’re stamped and mounted a little higher than the fox for a little change in dimension.  Finally it’s mounted on a dark blue card base. 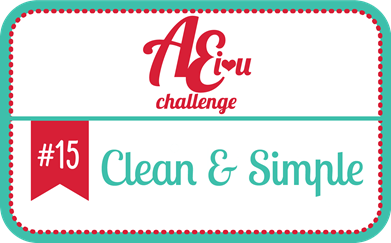 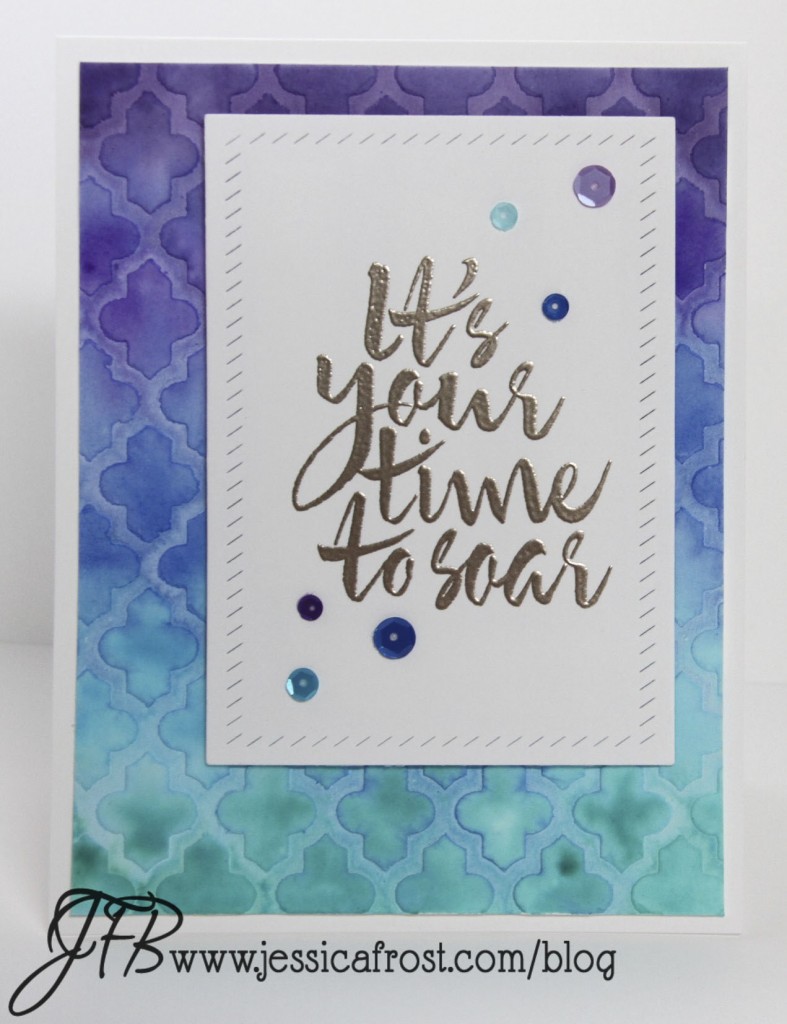 The second card was inspired by Jennifer McGuire’s most recent post using stencils and texture paste with Peerless watercolors.  I’d never tried watercoloring over the dried texture paste but it’s definitely something I’ll do again.  I started off by taping a piece of watercolor paper and the Heidi Swapp Lattice Stencil onto my cutting board and then applied a thin layer of Tim Holtz texture paste.  When the paste had dried I wet the paper liberally.  Then I painted the Peerless watercolors onto the paper in lines.  I love how easily the watercolors blend together.  It’s also just fun to pull the ink off of the little sheets of paper!  Then I used the small frame from the Finished Frames set for the inset piece and heat embossed the sentiment with Ranger platinum embossing powder.  The sentiment is from the Avery Elle Look Up set.  Finally I embellished the card with a few Pretty Pink Posh sequins! 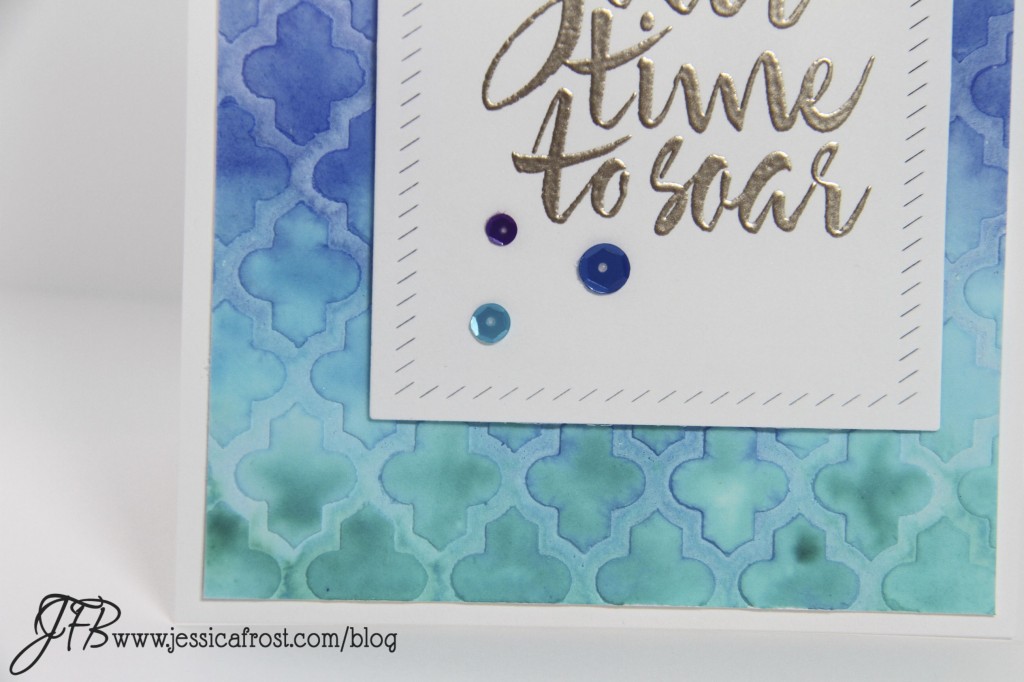 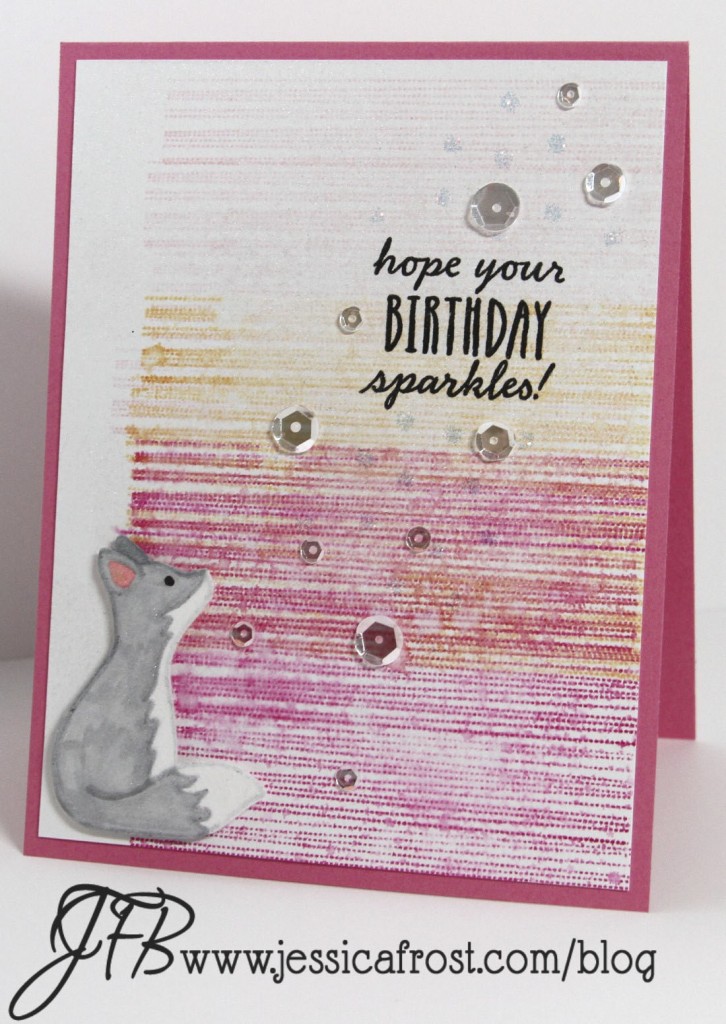 The third card is my favorite!  It’s one where I kept adding things to it (after I thought I was finished) but I really love the way it turned out.  I started out by stamping the fox off twice onto scrap paper and then coloring in the third stamping.  I wanted the fox to be grey and I didn’t want it to have a hard outline like the first card’s fox.  Then I fussy cut the fox so that it wouldn’t have the white outline from the die.  Instead of glitter, this time, I added flocking powder to the fox’s chest and tail tip.  Then, just because I can’t resist sparkly things I added some of the clear wink of stella brush pen to the grey parts of the fox. 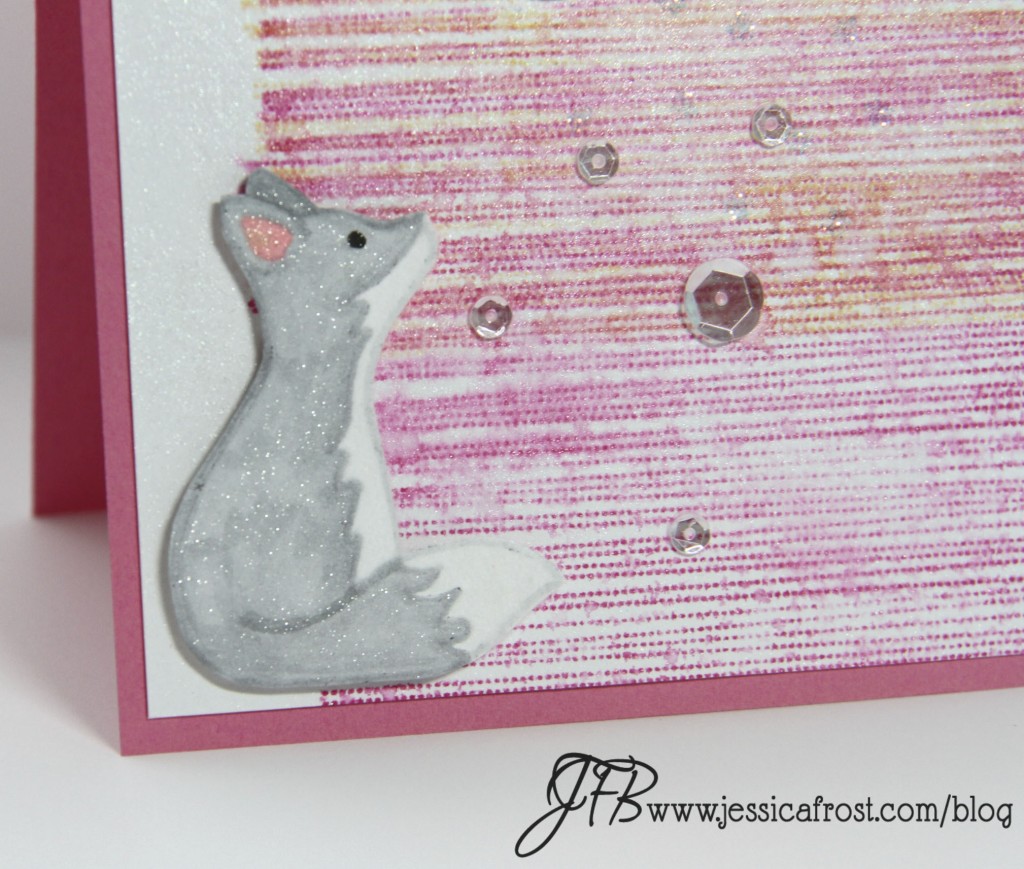 For the base I started by stamping the dotted lines from Papertrey Ink’s Ombre Builders in spun sugar and picked raspberry distress ink on watercolor paper.  I used dried marigold distress ink over the other colors to create a middle color layer.  And then I went a little crazy.  I started off by spritzing the whole piece with water to get a few little splotches and then I heat set the paper.  But I wanted a few larger drops so I used a wet paintbrush to get bigger water spots.  I let those sit on the paper for a few minutes and then blotted them off with a dry paper towel.

I had selected the sentiment from the Hero Arts Written in the Stars stamp set and I decided my card needed a little more sparkle.  So I spritzed the paper with a silver shimmer spray.  I used versafine black ink and clear embossing powder to get the shiny sentiment.  I used a stamp from the Avery Elle Let it Snow set to create the little sparkly stars amongst the sequins.  I masked the sentiment and then used versamark and sticky embossing powder to stamp the small stars.  I sprinkled diamond stickles over the sticky embossing powder and then burnished the glitter so that it wouldn’t fall off.  Finally I added a few Pretty Pink Posh sparkling clear sequins in varying sizes.

So those are my cards…I’m hoping to find a little time to play with the other cute animals in the More Stories set soon!