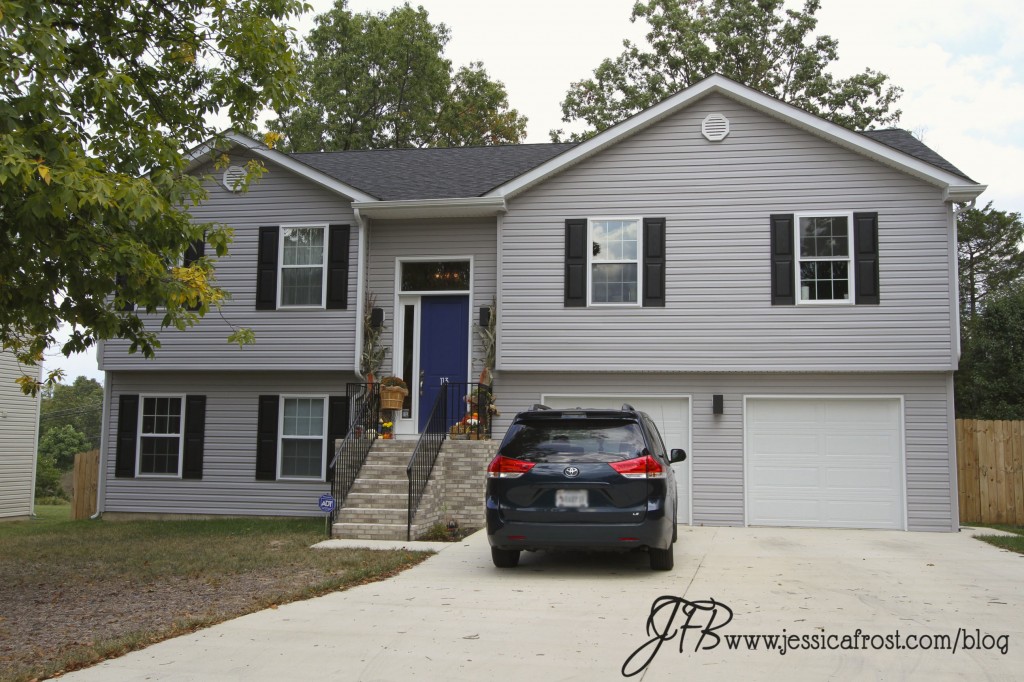 So, when we left off, this is what you’d see when you drove up to our home.  Love the house, love the fall decorations…not so much the “grass” and “landscaping”.  In fact there’s been a distinct lack of green in our yard since we moved in.  After construction the builder laid down some grass seed but the ground is basically just rock.  It’s ridiculous how difficult it is to dig even a small hole for our ADT sign.  In combination, the rock-hard ground and the super tall and leafy trees that block the sun basically make growing grass impossible.  We didn’t want to get rid of the trees so our first step was to try and till and amend the soil to give the grass seed a better chance.

The father of one of Steve’s private students is a landscaper and actually completed another small garden project and the privacy fence for us when we moved in.  We were really pleased with his earlier work and couldn’t imagine working with anyone else.  We discussed our front yard plans with him and decided that while the grass overhaul was a little out of our budget for this year we could move forward with putting in some foundation beds and improving the overall look of the front yard.  So last Saturday we went out to several different nurseries with Alex and purchased lots of plants for our garden.  I had lots of ideas for plants I wanted and Alex did a wonderful job of helping me fulfill some of those ideas while also giving suggestions that would fit his plans.

A few weeks ago our yard looked like this: 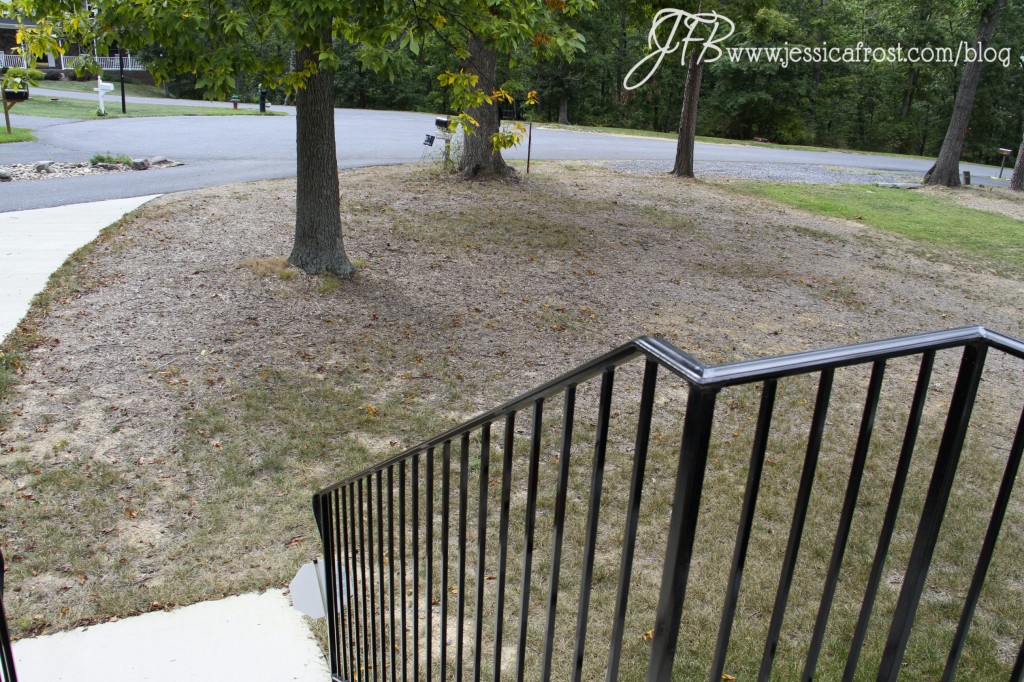 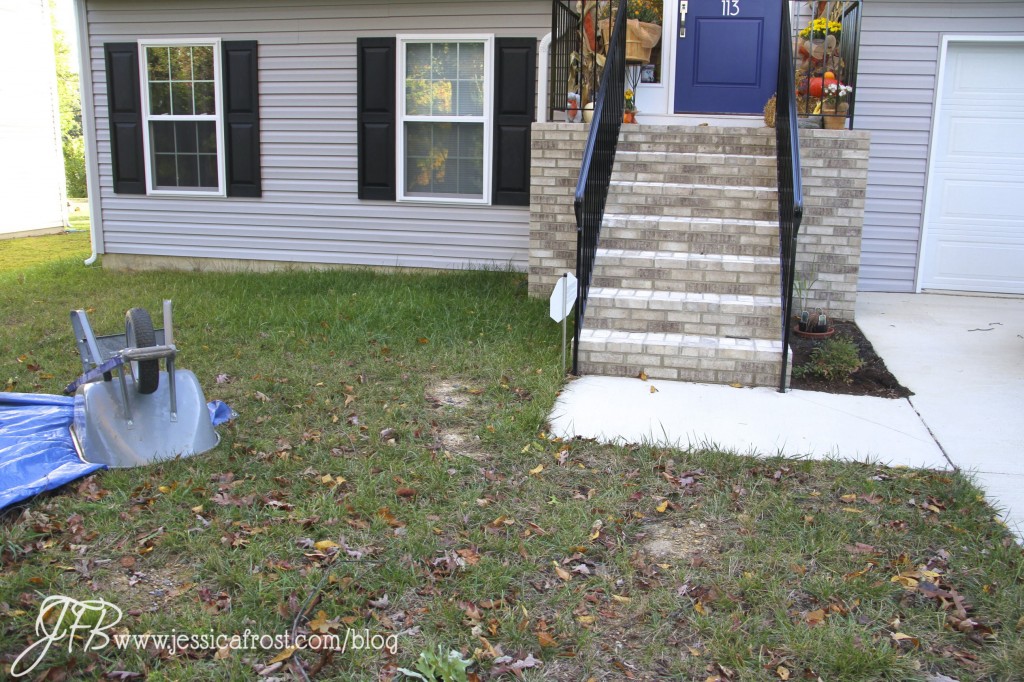 Then it looked like this Sunday evening after our nursery trip… 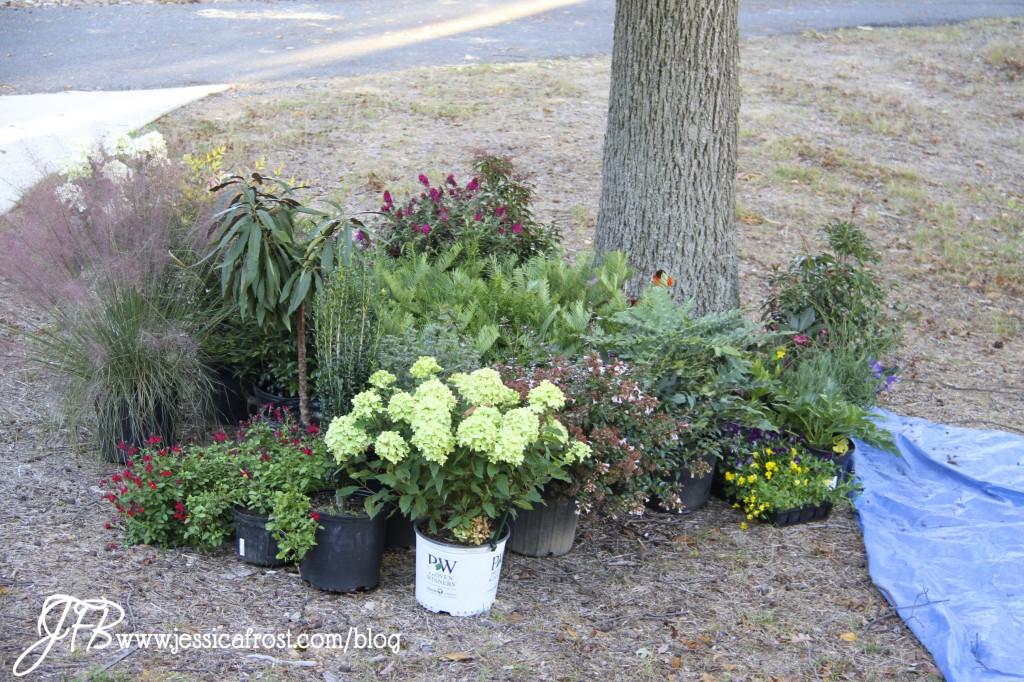 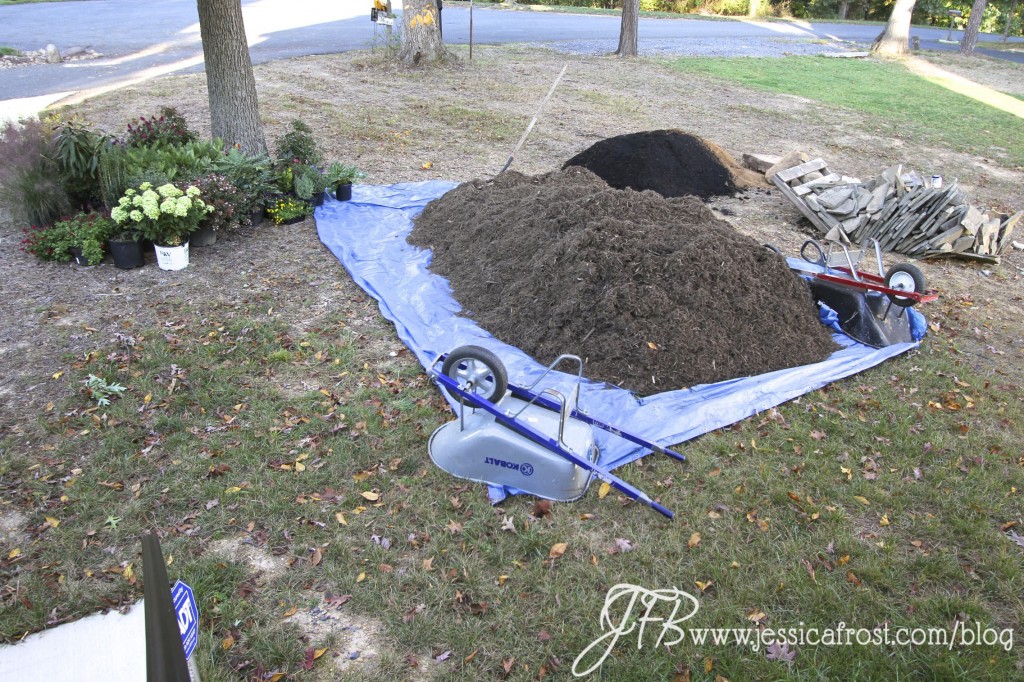 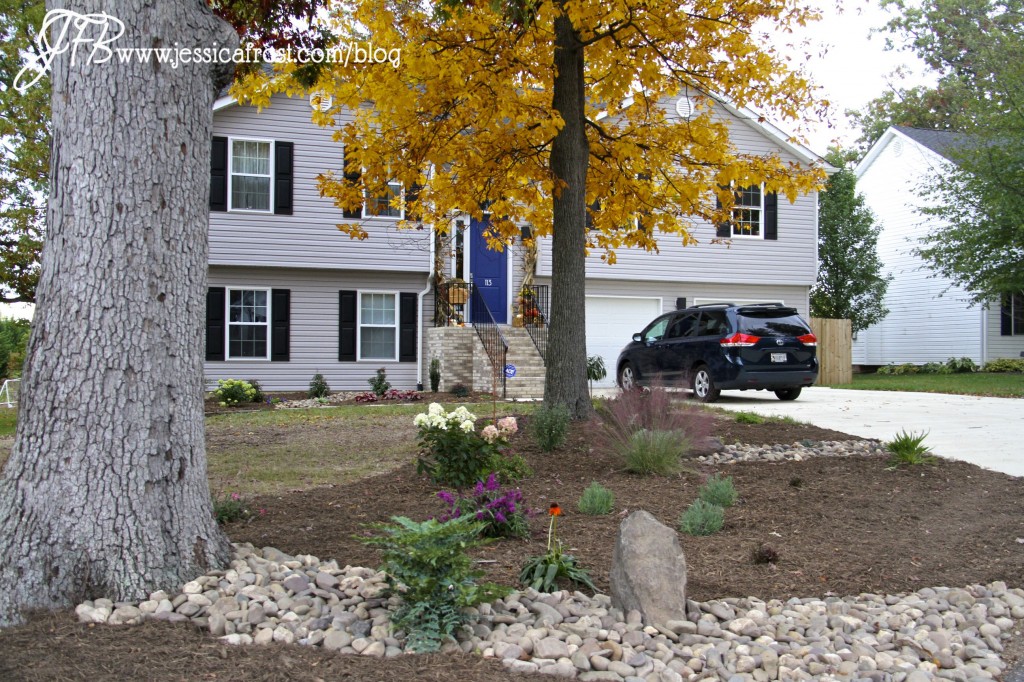 The big bed encompassing the two trees reaches all the way to the driveway and easement.  Our lot is a little oddly oriented and we actually have an easement running across our lot that also serves the two houses to our right.  The angle from the easement to the driveway is a little difficult to navigate so we’ve had to base some our plans around that.  Earlier in the year we had problems with people driving over a wedge of our land on the other side of our easement and destroying the grass so Alex installed a rock garden to help keep cars off that area. 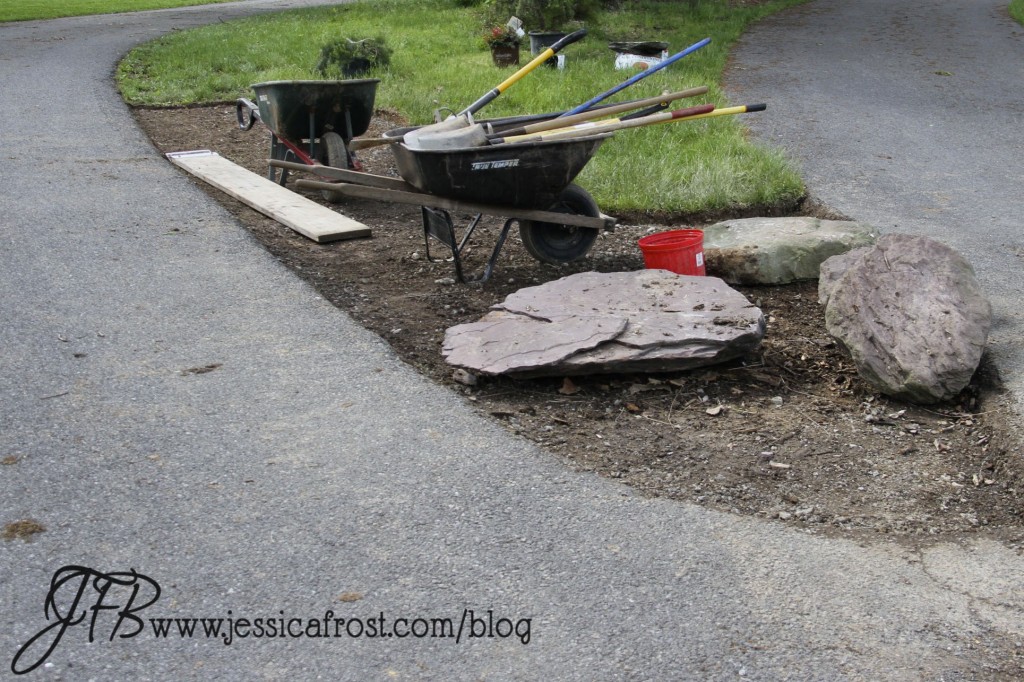 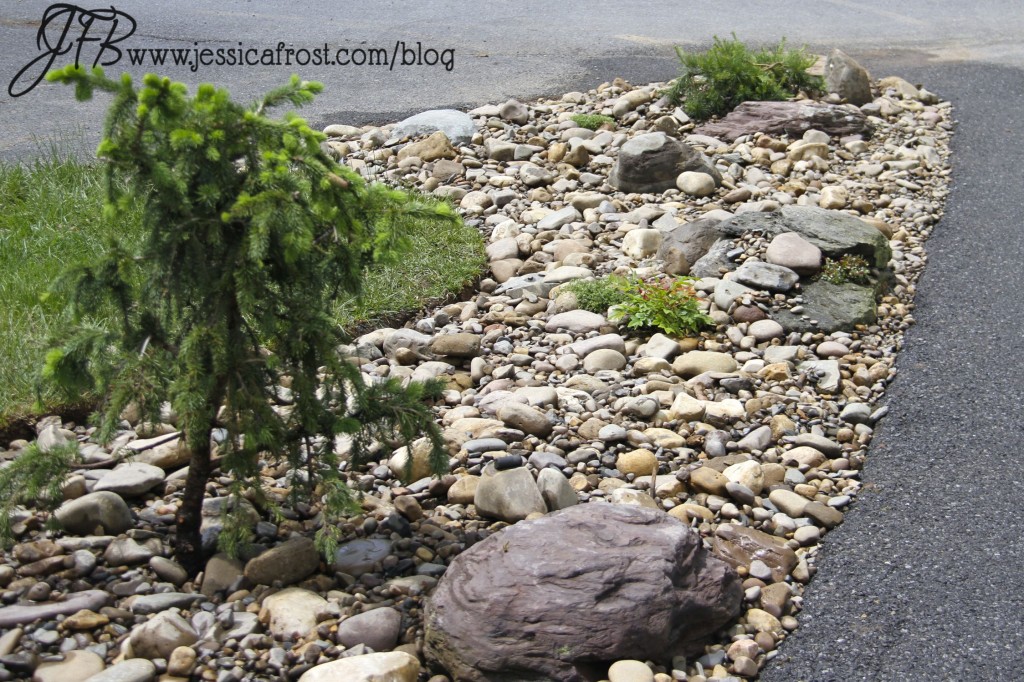 When we were designing the gardens on the other side of easement closest to the house we wanted to tie in some elements of the rock garden so that it would look cohesive.  Alex suggested using some of the smaller rocks to create a dry creek bed that would “flow” from the bed closest to the house through the bed around the trees to the original rock garden.  I had found photos of gardens with beautiful stone retaining walls and I asked if that element could be included in our design and Alex definitely found a way to work it in!

The garden bed furthest from the house features a lot of plants that will attract butterflies and hummingbirds in the summer.  There’s also room to add some annuals in next year. 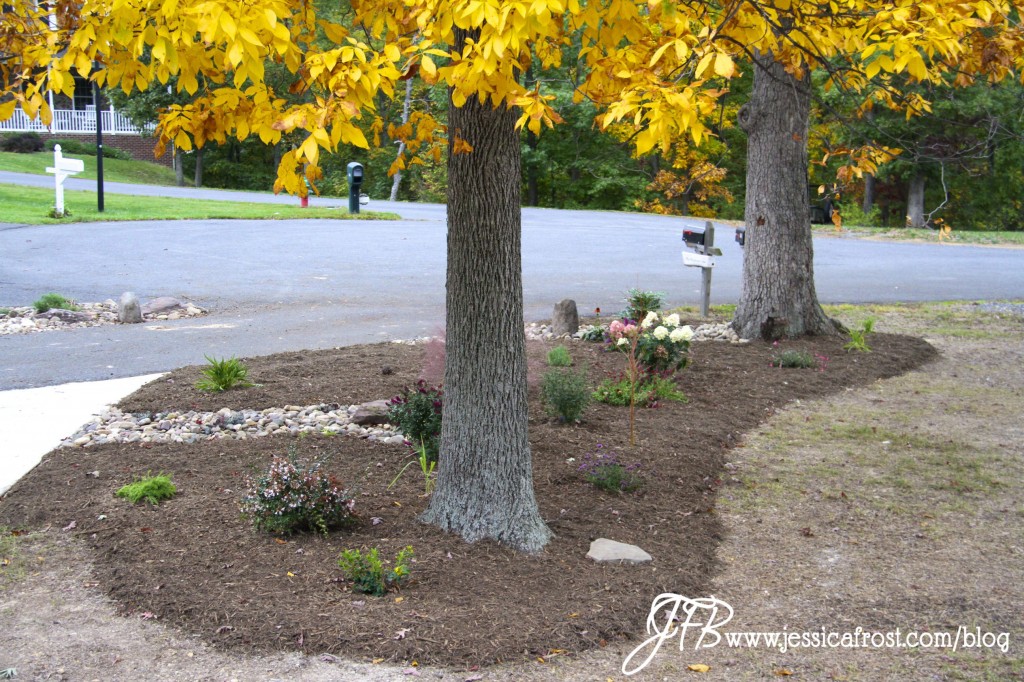 These are the plants in that garden bed:

Next year I hope to add monarda, lantana, asclepias, coreopsis, phlox, daylilies, gladiolas, and zinnias for more color (and more butterflies!).  In addition there are about 50 various bulbs: tulips, snowdrops, allium, hyacinth, and others planted in clumps throughout the garden.  I look forward to seeing where those turn up in the spring!

Now, the bed closest to the house is probably my absolute favorite.  Alex installed a beautiful limestone retaining wall that leveled the left side of the garden.  It also incorporated the red Japanese maple that Steve’s parents gave us last year. 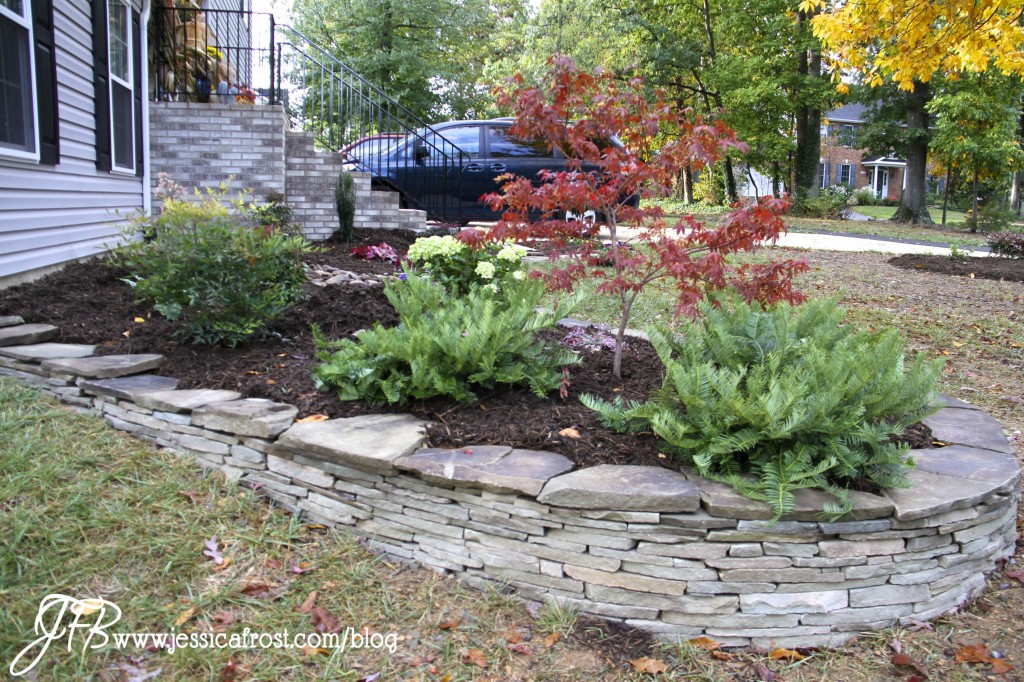 He flanked the maple with three Japanese plum yews that should fill out nicely around the curve of the bed. 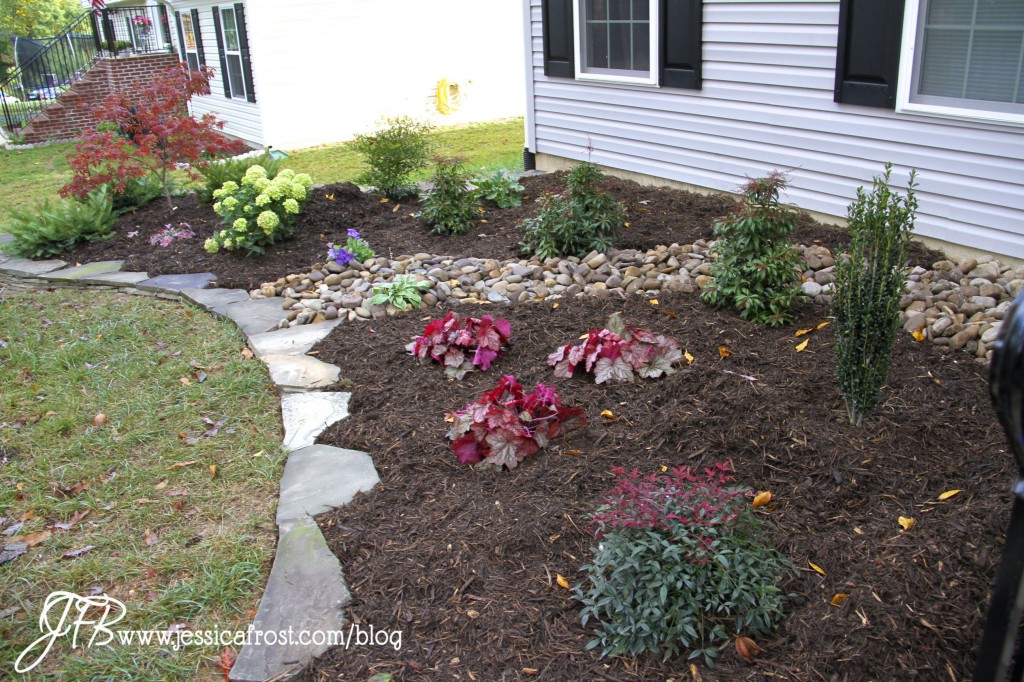 In that garden we’ve got the following plants:

In the photo below you can see the dwarf peach tree surrounded by violas right in front of the backdoor of my van. 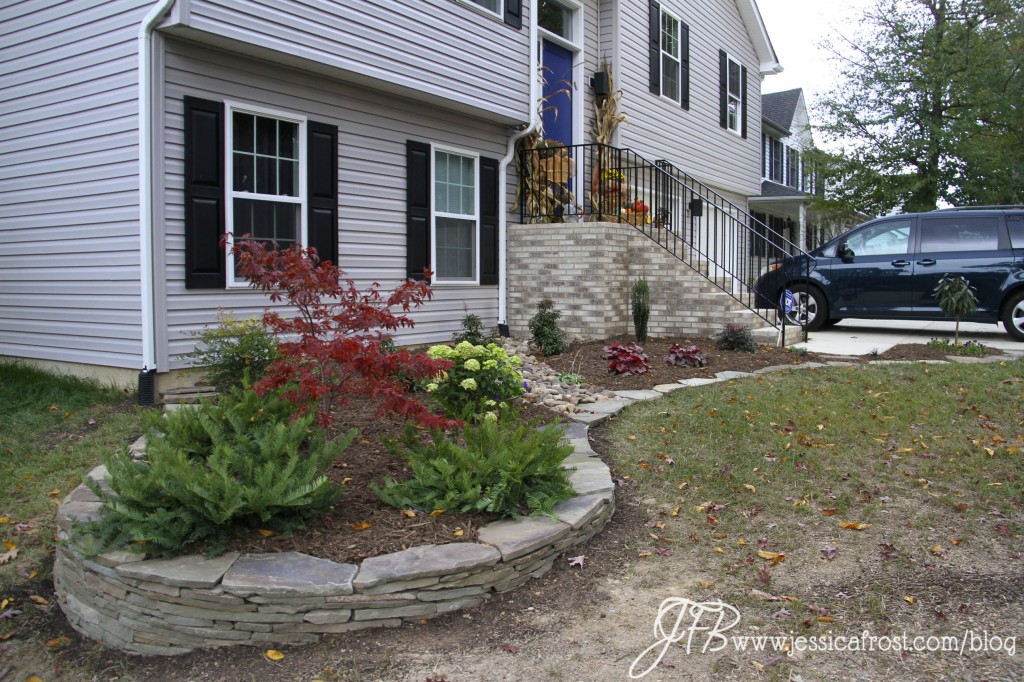 When the house was built they put in a small garden bed built in between the steps and the driveway.  Originally we planted some grasses and a nandina bush there but Alex moved the grass into the larger bed and put the nandina in the rock garden to make room for his creation.  I was wondering what he’d do with this bed but I NEVER thought a space that small and narrow could look so cool! 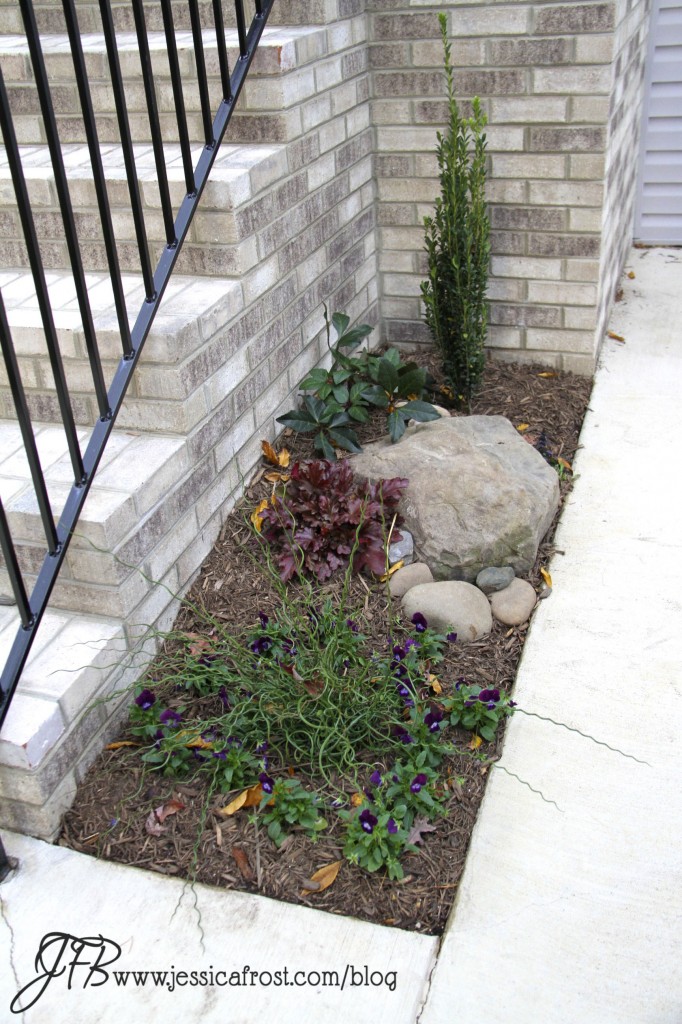 In the last bed we’ve got the following:

In both of those beds we’ve also got another 50 or so bulbs mixed in for early spring color!  So there it is…we’ve got a little while until we’ll have a full face-lift of nice green grass but the fun stuff is well on its way.  It’s already providing pretty fall color and I can’t wait to see what it all looks like next summer! 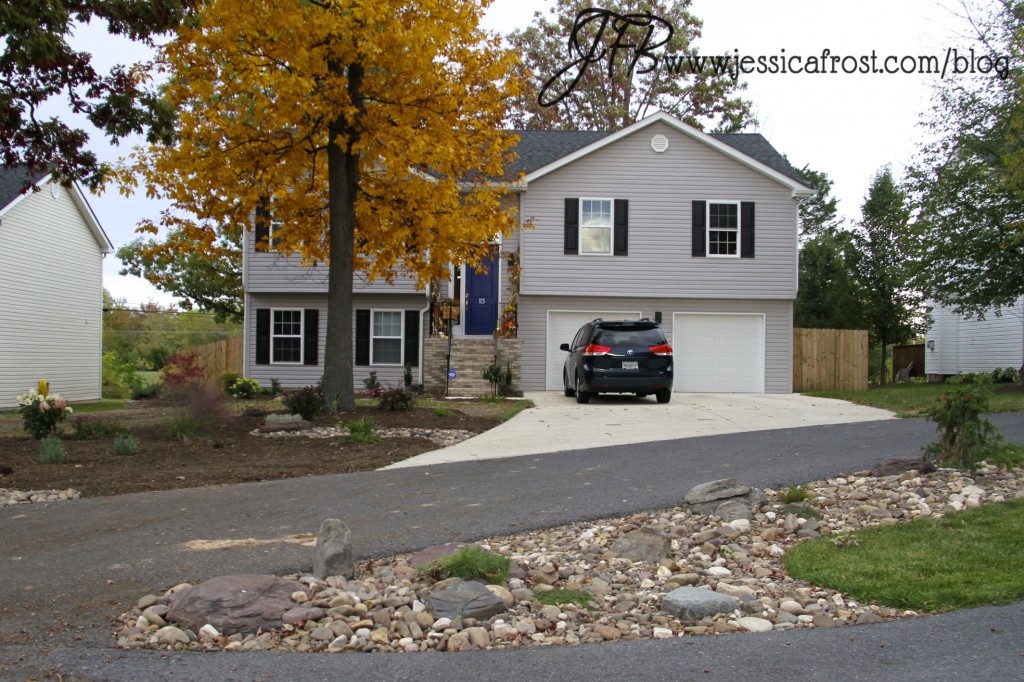