I recently discovered the company, Mama Elephant, and I LOVE their stamps and dies.  I’m also in the process of trying out their pigment inks…I’ll share that experience later!  I’ve had this Peek-A-Frame die for awhile but hadn’t gotten a chance to use it.  I decided to create a snowy shaker card.  I realize that it’s not quite realistic as the wreath/cat/snow/banner wouldn’t all be on opposite sides of the window but oh well…you get the idea.

I started off by blending distress inks on a piece of watercolor paper.  I used salty ocean, chipped sapphire, and black soot.  I also spritzed pearlized water onto the background to give it a little shimmer.  While that was drying I worked on the rest of the card.

I started off by die-cutting the stitched frame from the Peek-A-Frame collection with the window die taped to the left of center.  Then I lined up the window die and cut the opposite side.  I cut a piece of acetate and adhered that to the inside of the window.  Then I used my Silhouette Cameo to cut the cat silhouette and glued that to the acetate with a few glue dots. 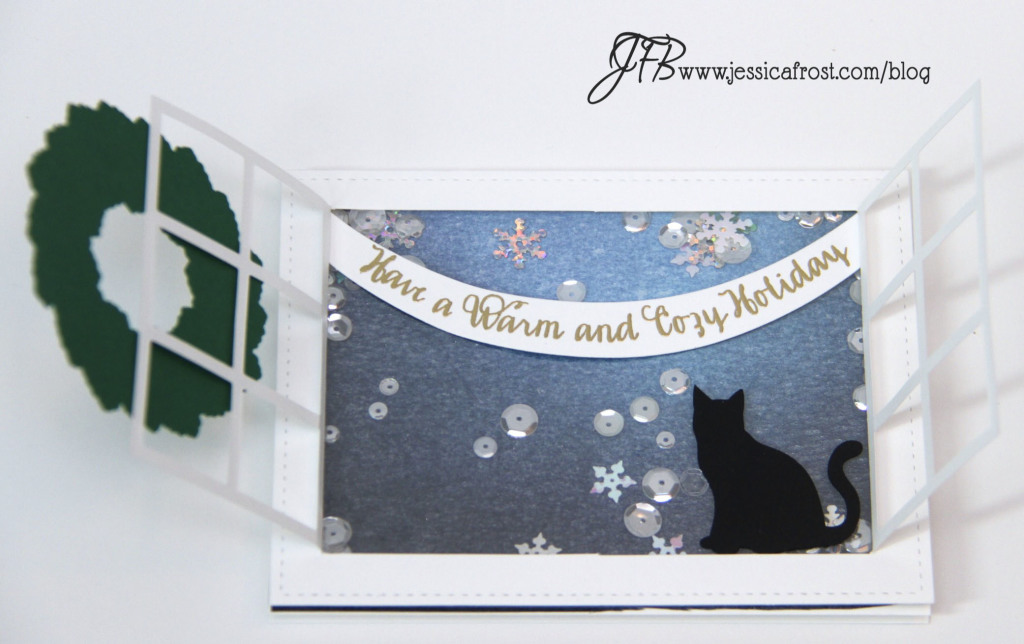 Since the outside scene was going to be dark and snowy I wanted a sentiment that would reflect the cozy inside of the imaginary house and the Inside Holiday Greetings stamp set from Simon Says Stamp was perfect!  I wanted it to look like it was on a banner so I used the curved die from the Avery Elle Custom Panels set as a guide and curved the sentiment around the line and then attached it to my Fiskars stamp press.  I stamped it with versamark and then embossed it with gold metallic powder from Wow.  Then I used the same curved Avery Elle die to cut out the sentiment into a banner shape.

I filled the shaker card with various sizes of silver and sparkling clear Pretty Pink Posh sequins and mounted the watercolor background to the window with two layers of foam mounting tape.  Originally that was all I had planned for the card but I felt like it was missing something.

So I created the wreath with the WPlus9 Woodland Wreaths set and created the bow from the Mama Elephant Basic Set dies.  I adhered it to one side of the window so that the window can still be opened to reveal the scene inside.  This wasn’t the fast card I’ve created but it was well worth the time and effort.  I think the intended recipient will enjoy it!