So yesterday I finished the masking cards and decided to try doing a freehand background wash with watercolors.  I’m a fan of blues so I thought I’d try blending various shades using the Hero Arts watercolor wheel.  While the paper was drying I pulled out a few birthday cards that I need to deliver in the next few days.  After looking at one of them I decided I didn’t really like it for the intended person…and decided to try something totally different.

Of course, this is all happening at 8 pm and I haven’t eaten (or even started) dinner yet and have just spent the last 5 hours teaching.  It probably wasn’t the best time to try a new technique that requires some strategic thinking but I launched into it anyway! 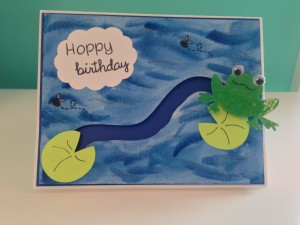 So here it is, my first attempt at a spinner card for my harp student and good friend, Kay!  My craft room has never been quite so messy after a card-making session!  I hope she likes it!

I started off with one of my watercolored blue papers.  I used two shades of blue to get the basic background color and then went back over it with two darker shades to get some texture to the “waves.”  I was originally planning on trying to do land and water but my brain was not cooperating in dimensional thinking so I gave up on that early on.

The next step was defining the path that the spinner would travel.  I followed Cambria’s tutorial from Splitcoaststampers for the basic idea.  But frogs don’t normally travel in straight lines so I wanted to do something a little curvier.  I tried several different methods (and I know there’s an easier way to do this with my Silhouette) but I finally used the wavy die from the Avery Elle Custom Panels die set to cut the upper line.  Then I lightly traced the bottom line with a pencil and freehand cut it with a craft knife.  I aimed for keeping the space about a 1/2″ apart but it’s not perfect.  Again I’m sure there’s got to be an easier way to draw and cut this shape with my Silhouette and if you know, please feel free to share!

After the path was cut I went off to find a frog shape in the Silhouette library.  There were several I liked but I thought this one would do best on the card.  I cut the shape out and added googly eyes for fun.  I also drew on a mouth with a copic multi-liner.  As I looked at it I decided I wanted it to have a little more interest so I covered it with glossy accents.  Normally I aim for not having bubbles in the glossy accents but I thought it made the frog a little more natural looking so once it was covered I went back over it with a pin and pricked little spots in the glossy accents to get bubbles and texture. 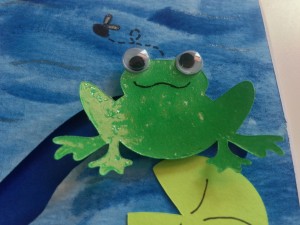 As he dried he curved up a little on the edges but that’s okay…it actually helps to keep his feet from getting stuck in the spinner.

I also cut two lily pads shapes from the Silhouette and drew on some accent lines with the copic multi-liner.  I attached the lily pads to either end of the spinner path. I wish I had thrown in a flower on the lily pad or added a tongue to the frog but was afraid to go overboard.

I used several stamps from some Lawn Fawn sets (Happy Everything and Jessie’s ABCs) to spell out “Hoppy Birthday” and cut the sentiment using a Lawn Fawn Die (A Birdie Told Me).  I also stamped two bugs from the Avery Elle Storybook set onto the watercolor piece.  I colored in the body of the bugs with a copic multi-liner and colored the wings first with a white gel pen and then with a wink of stella silver glitter pen.  I used the same silver glitter pen to add some curls and curves to to the background waves.

Then it was assembly time!  I cut two small circles (approximately 1/3″ each) from Scotch foam mounting tape and attached one circle to the middle of a penny.  Then I stacked a second penny on top of that (like a sandwich).  Finally I attached the other circle to the top of the penny stack and stuck my frog on top of that.  I gently bended the watercolor background so that I could slip the penny sandwich around the paper.  So the paper path is surrounding the middle (or “filling) of the penny sandwich (and in between the two pennies).  I hope that makes sense.

Once I got over my fascination with sliding the frog back and forth I took an A2 white card base and attached a dark blue piece of cardstock to the top as I didn’t want the visible path the frog traveled to be white.  Then I attached the foam mounting tape two layers thick on the back of the watercolor paper and adhered that to the blue frame.  Using two layers of tape allows the frog to spin easily across the page.  Once it was attached I decided that I didn’t like the white edge of the watercolor paper against the blue cardstock so I took the Stampin’ Up Midnight Muse marker and used the brush tip to go over the edge of the watercolor piece so that it blended. 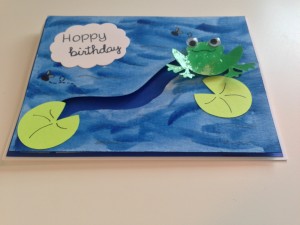 So there you go, the card that almost killed me…but I think it was worth it!

P.S. I just realized that Papertrey Ink makes an actual spinner die…it will totally be worth the purchase.

« OCC: Watercolors for Card Makers Day 2
The beginnings of a house tour »