Today was the second day of the Online Card Class.  Today’s videos covered different methods of doing watercolor background washes and also introduced masking using frisket or rubber cement.  I had seen frisket on the recommended supplies list a few weeks ago and decided to go ahead and order it so that I’d be ready when they introduced it.  And I’m so glad I did…it was a lot of fun to play with and I’m sure I’ll use it again.

Anyway, here goes…my two projects for the day (there’s a third but I’ll have to share it AFTER it’s given to the intended person soon)! 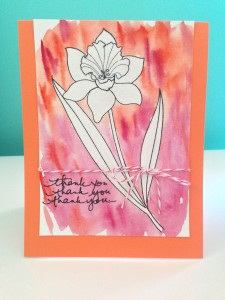 I followed Jennifer McGuire’s tutorial for masking with frisket.  I started off by stamping the image (Papertrey Ink’s Year of Flowers: Daffodil) onto the smoother side of a piece of Tim Holtz watercolor paper with Momento tuxedo black ink.  I let it dry for a minute or two and then used a cheap paintbrush from Michael’s to paint frisket over the white parts of the image.  It’s not important to get the frisket over the black ink as the watercolors won’t cover the black.  Again this was my first time using frisket and it wasn’t perfect but it was a good learning experience.  I realized that I need to work a little faster and not be quite so worried about perfection.  I also think I needed a stiffer brush but again I was just using a cheap brush that could be thrown away afterwards if I couldn’t get it clean.

After the frisket is applied let it dry completely.  I learned (later) that it will still be slightly tacky when it’s dry.  After it was dried I taped the paper to a glass board so that it wouldn’t warp and covered the paper with water from a large flat brush.  After the paper was wet I went over it with orange and pink paints from the Hero Arts watercolor wheels.  I did a light wash of color first (pink on the bottom and orange on top) and then followed that with slightly heavier vertical streaks of the same color on the top and bottom.  After that air-dried for a minute or two (just until the big wet puddles soaked in a bit) I decided to add the same streaks but in opposite colors to the top and bottom.  Once I was satisfied with the color I let it air dry completely.

After it was dried I rubbed off the frisket with my finger.  It came off pretty easily but there were a few spots where I tried to go too fast and ended up rubbing off a little ink.  I went back over those spots later with the copic multi-liner and that seemed to fix it.  The frisket was off-white when it was applied but leaves nothing behind when it is removed.  There were a few paint spots here or there where I didn’t apply the frisket evenly but I was able to scratch those off the paper with a craft knife.

I finished the card by stamping an Ali Edwards sentiment off to the side and tying a piece of pink twine around the card for a little texture.  I adhered the piece to an orange A2 card base.  My only regret about the card was the paint borders.  In some spots I watercolored all the way up to where the tape was holding the card in place so when I removed the tape there were a few weird edges.  I ended up having to trim them off and I wasn’t totally thrilled with the result.  I wish I had kept the watercolors further from the tape so that the edges would have looked more rough and natural. 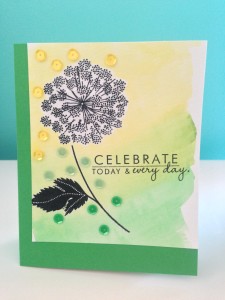 The second card also used the masking technique but with a slightly more complicated (at least to me) stamp set.  I’d been wanting the Papertrey Ink Meadow Greens set for quite awhile but it had been out of stock for several weeks.  It just arrived a few days ago and this was my first time using it.  Again I used the Tim Holtz watercolor paper and started off by stamping the dotted flower image and stem using the Fiskars stamp press and Momento tuxedo black ink.  Then I stamped on the leaf and finally the little stems connecting the flowers, again using the Fiskars stamp press.  In hindsight the stem is a little off but that’s okay.

So this was actually the first card I made…and I wasn’t really thinking through the purpose of the frisket when I did this one.  I actually wasted quite a bit of time by trying to cover the stem and leaf with the frisket, not realizing that the watercolors wouldn’t cover the black ink.  Oops…  Really, all I needed to do was mask the flower portion.

Again I let the frisket dry and then brushed the entire piece with water until it was thoroughly saturated.  Then I used the Hero Arts watercolor wheel to apply a soft wash of colors, yellow, a light grassy green, and a darker green.  I then went over the borders with a clean wet brush to blend the colors together.  I ran into the same problem where I painted too close to the tape edge but it wasn’t quite as bad.  You would have thought I’d realized it after finishing this card…and you’d be wrong.  But I learn something new each time I make a card and file it away for future use!

After the paper was completely dry I rubbed off the frisket to reveal the nice white flower background.  I finished the card by stamping a Papertrey Ink sentiment and adding a few Neat and Tangled sequins in coordinating colors.  Finally, I adhered the watercolor piece to a green A2 cardstock base to complete it.

Unfortunately my schedule probably won’t allow me to do cards for the next two days but I hope to catch up on Friday…I might try to get up early enough tomorrow to squeeze one in before I start teaching!