It’s been awhile but here’s the next step on our house tour!  When we decided to build a split-foyer, despite them being very common around this area, I received a ton of negative feedback from various house forums.  But among the naysayers there were a few who were very encouraging and provided some great ideas for improving the design.  Of course, a split foyer is not my dream home layout but it’s undeniable that it works REALLY well for our living situation.  So that being said, here’s the entrance to our house! 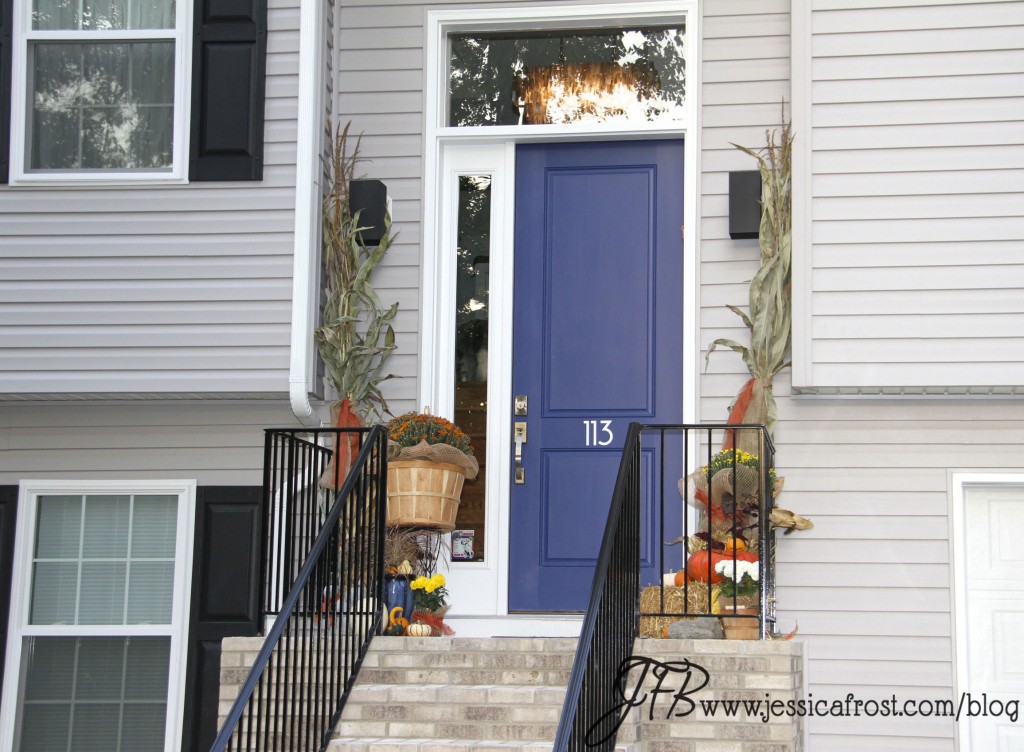 Our last rental was a split-foyer and one of my least favorite things about it was the appearance from the front of the house.  I didn’t like how small the door looked and the big space between the top of the front door and the roof.  When I mentioned that on a forum one contributor had a suggestion to use an over-sized door to make it fit in better visually.  I decided to use an 8 foot door with one sidelight and an over-sized 2 foot transom window above.  It gave us more light inside and also helped make the front of the house look more balanced.  The door is painted in Sherwin-Williams Commodore and I love how bright and cheery it is!

You’ll also notice one of my recent craft projects…we spent over a year without house numbers because I couldn’t make up my mind.  So after watching another person fumble around trying to find our house I went ahead and used my Silhouette to cut the numbers from vinyl.  I really like the font but most of all I like that it’s not permanent; if I change my mind in a few months I can redo it! 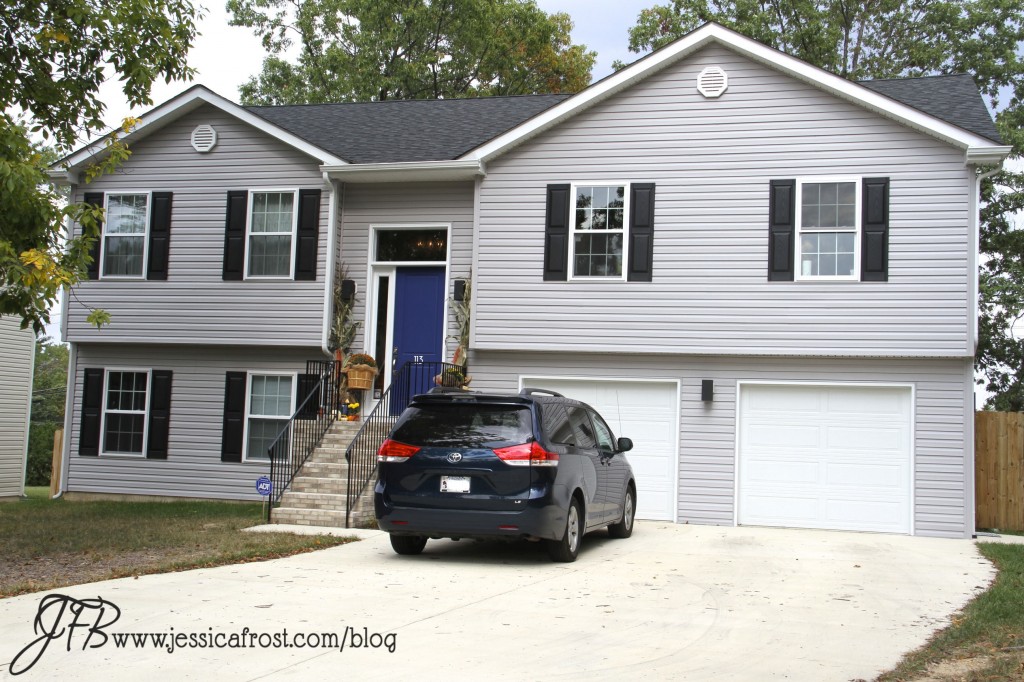 The other gripe about our last house was the actual foyer.  When you walked in the front door you were immediately stuck on a very small landing without much room to maneuver.  So in the new build we made the landing several feet wider and deeper to give us a little more room.  I also planned to have my students come in through a side door so the only people coming in the front door would likely be going upstairs to the main living areas.  To show that the upstairs is the main living area we widened the stairs going up by a couple feet.  It really opens up the landing and makes everything seem so much more inviting.  That has to be one of my favorite decisions in the entire house.

When you walk in the house there’s a small gallery wall on the left side using Ikea Ribba frames.  I used my photos of the various places Steve and I have visited both together and apart: NYC, Seattle, Istanbul, Venice, Mykonos, etc to create a “destination” gallery wall.  I still have to frame a photo from Pittsburgh and one from St. Michael’s.  Hopefully we’ll be able to continue to add to the wall in the near future! 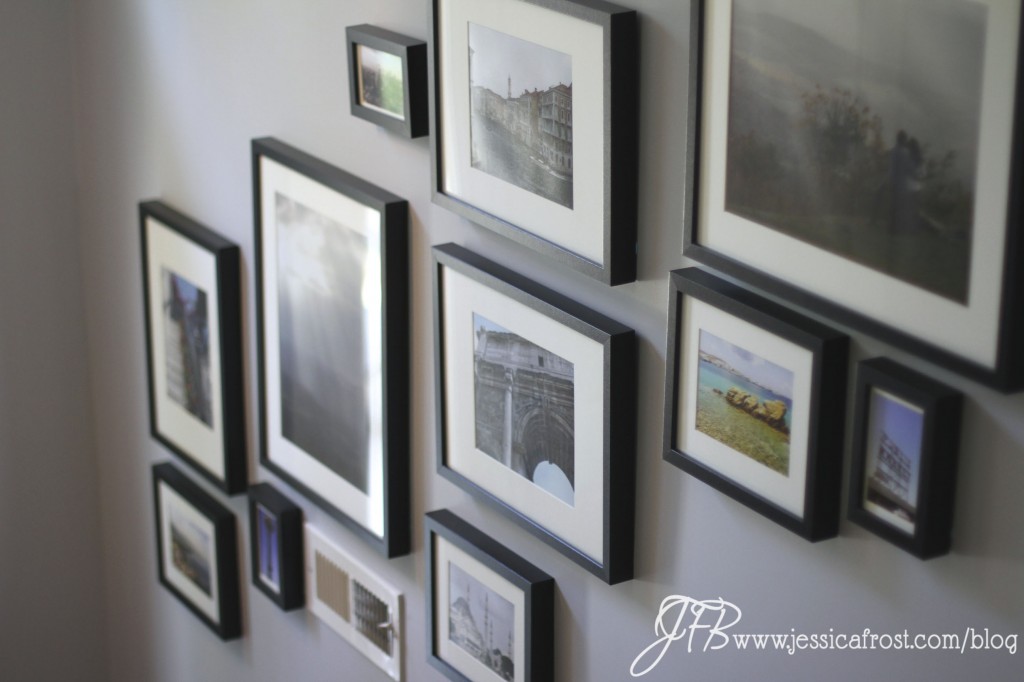 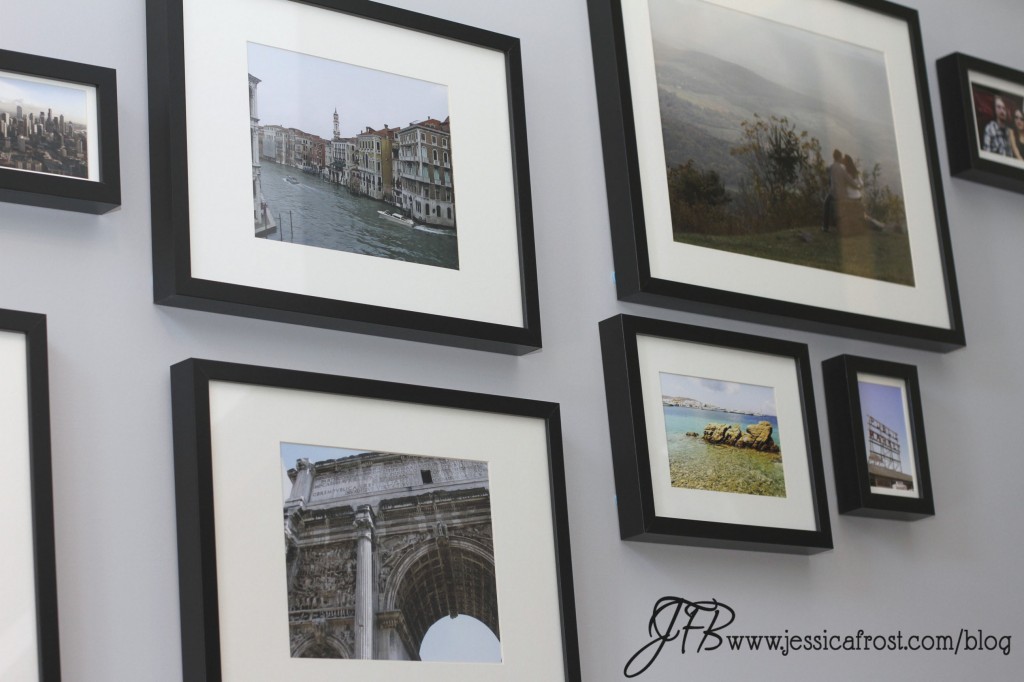 On the other side of the wall I made a custom art piece based on an idea I found on Pinterest.  I took four canvases and cut circles from three different colors of grey cardstock using my Silhouette.  Then I arranged them on the canvases and glued them down.  The hardest part of the whole project was hanging the canvases…seriously, super easy to create and it definitely catches your attention.  I used grey to compliment the beautiful capiz chandelier from West Elm that hangs in the foyer.  I originally wanted to do the canvases with grey rectangles but realized that it didn’t quite create the effect I was looking for. 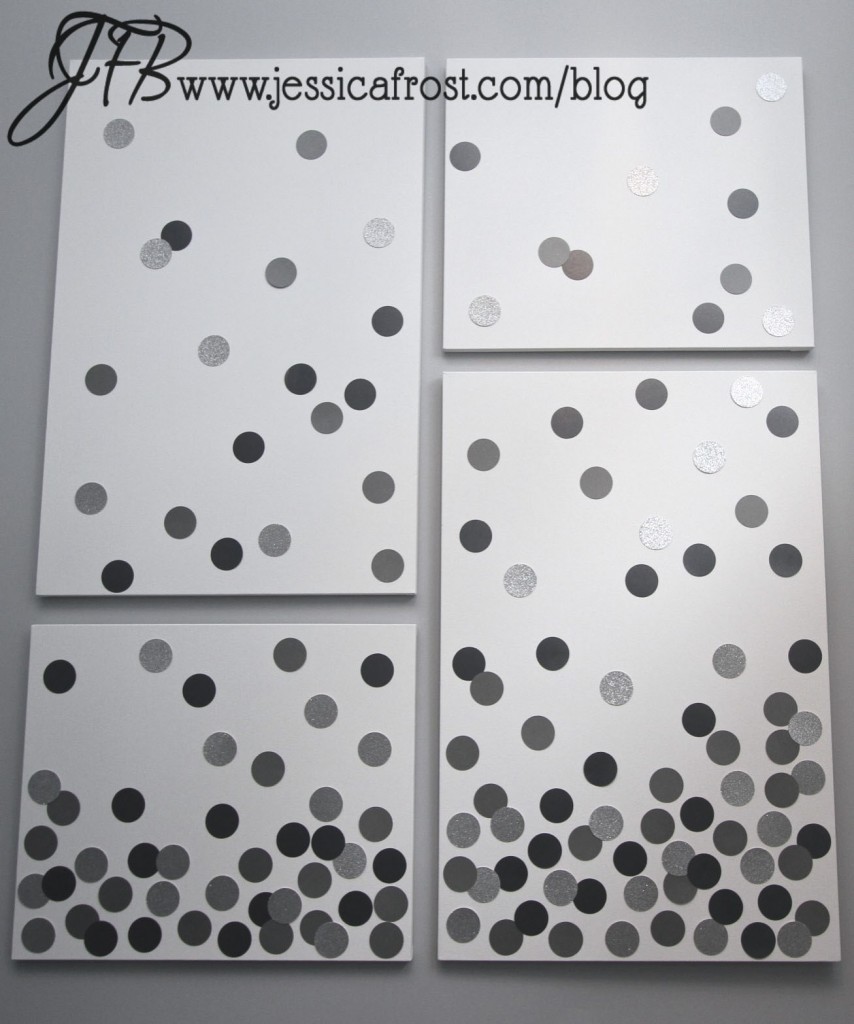 And this is the view looking down from the top of the stairs.  Our electrician was very patient with me and helped finagle the metal rods so that the chandelier is visible through the transom window.  It fits perfectly and makes quite the statement when you drive up at night.  The coat rack is from Ikea and was an impulse purchase but I love the way it looks!  I still need to find a more interesting rug for the entrance. 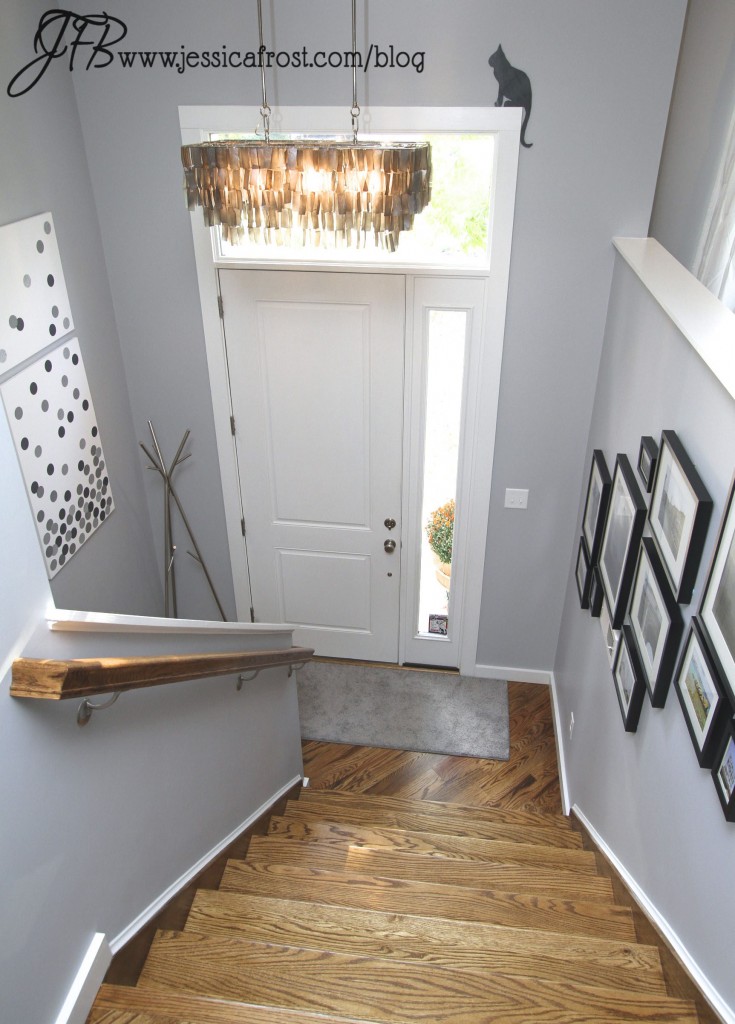 And just to be fair, here’s the view of the other staircase from the bottom floor going up.  I admit, it’s nothing exciting but I haven’t really figured out what to do with the walls yet.  I’m also stuck on the walls in the downstairs hallway so until sometimes comes to me it’ll probably be a little boring down there.  Steve and I are basically the only people using that staircase so we’ll get to it eventually.  It looks really narrow but the stairs are actually 4 feet wide going down so there’s plenty of room.  *Oops, probably should have noticed that smudge from the hinge before I posted the photo.  Oh well…* 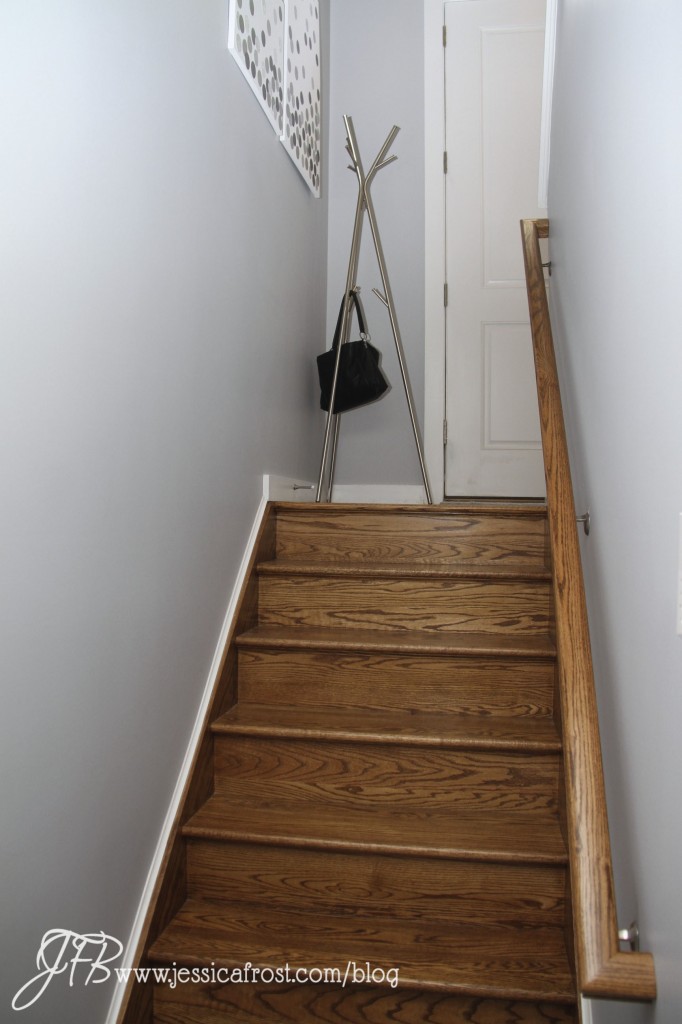 And finally, I got around to a little fall decorating this weekend.  Last year we were in such a rush just to get unpacked that we didn’t do much seasonal decorating.  I was thrilled to break into some of my decorations in storage and get the front entrance ready for fall! 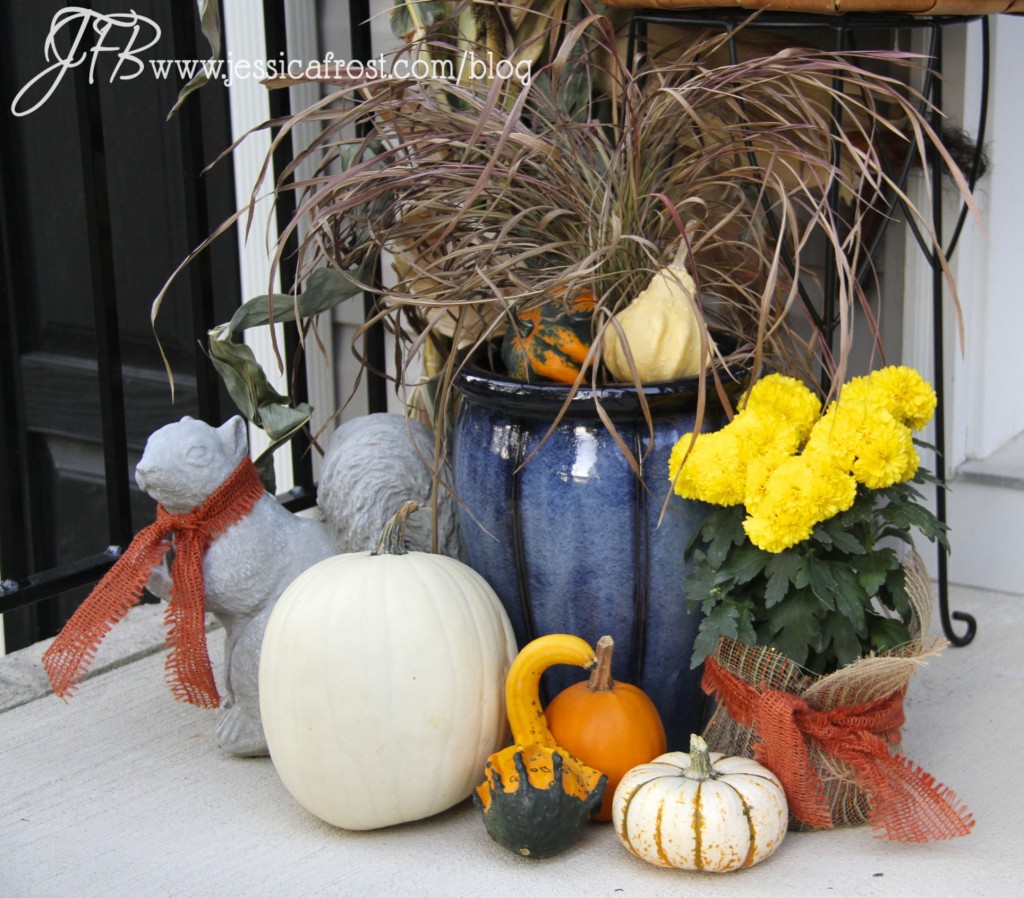 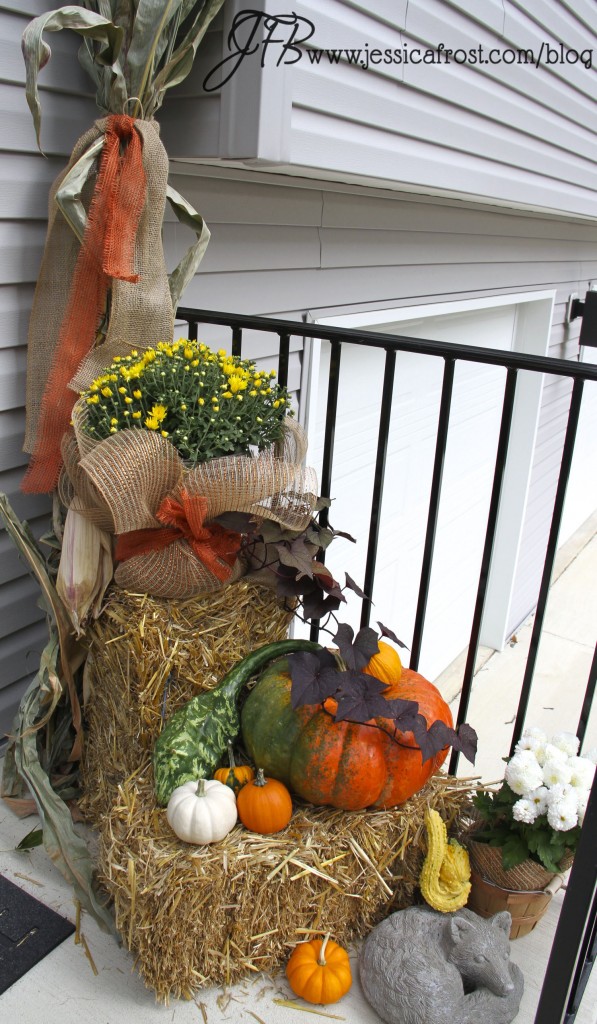 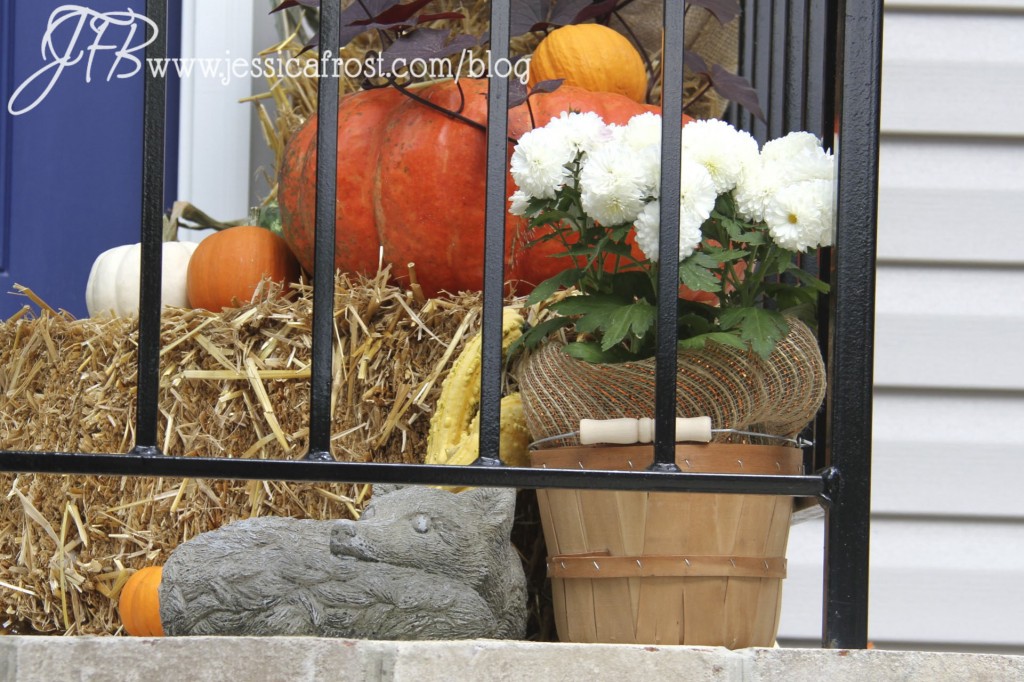 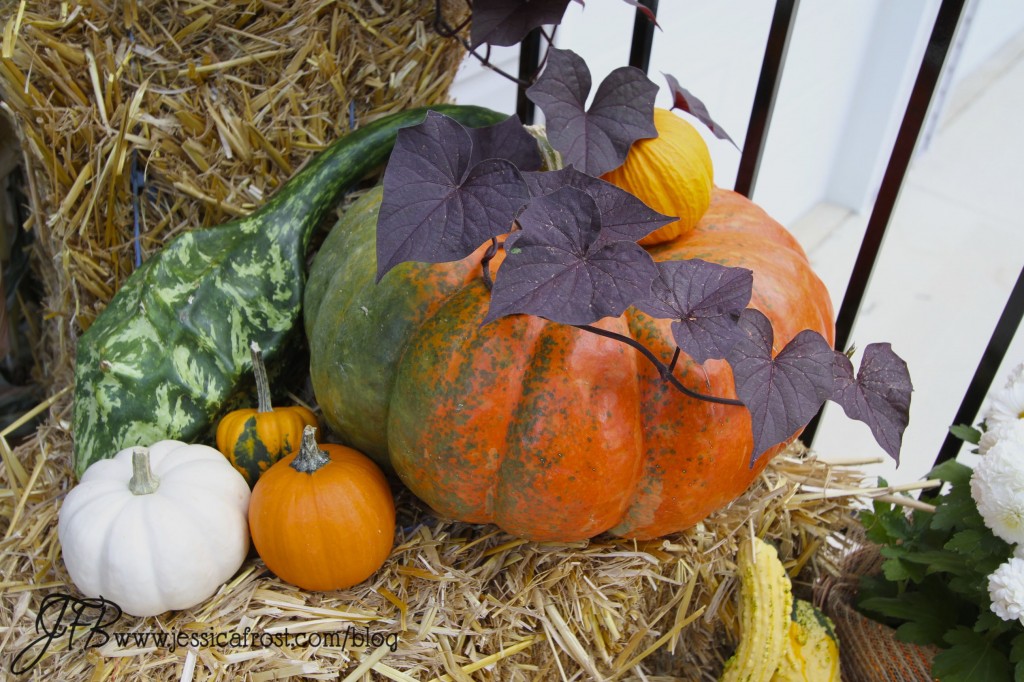 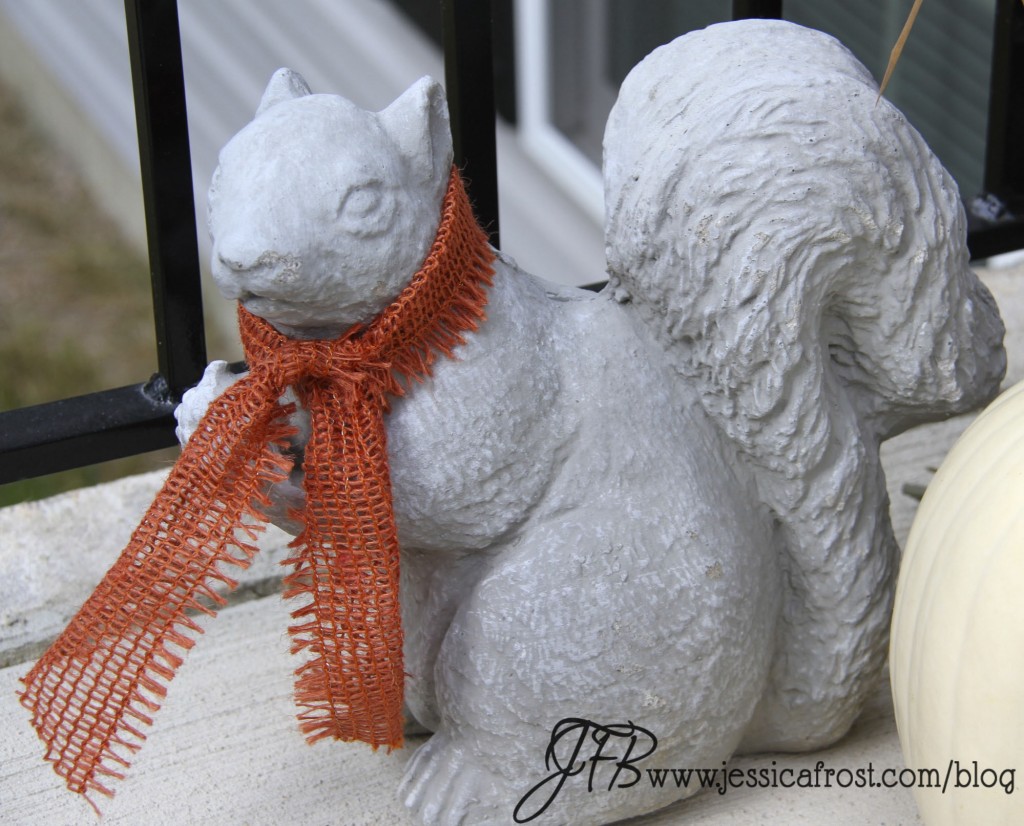 Even our squirrel is ready for the changing weather!