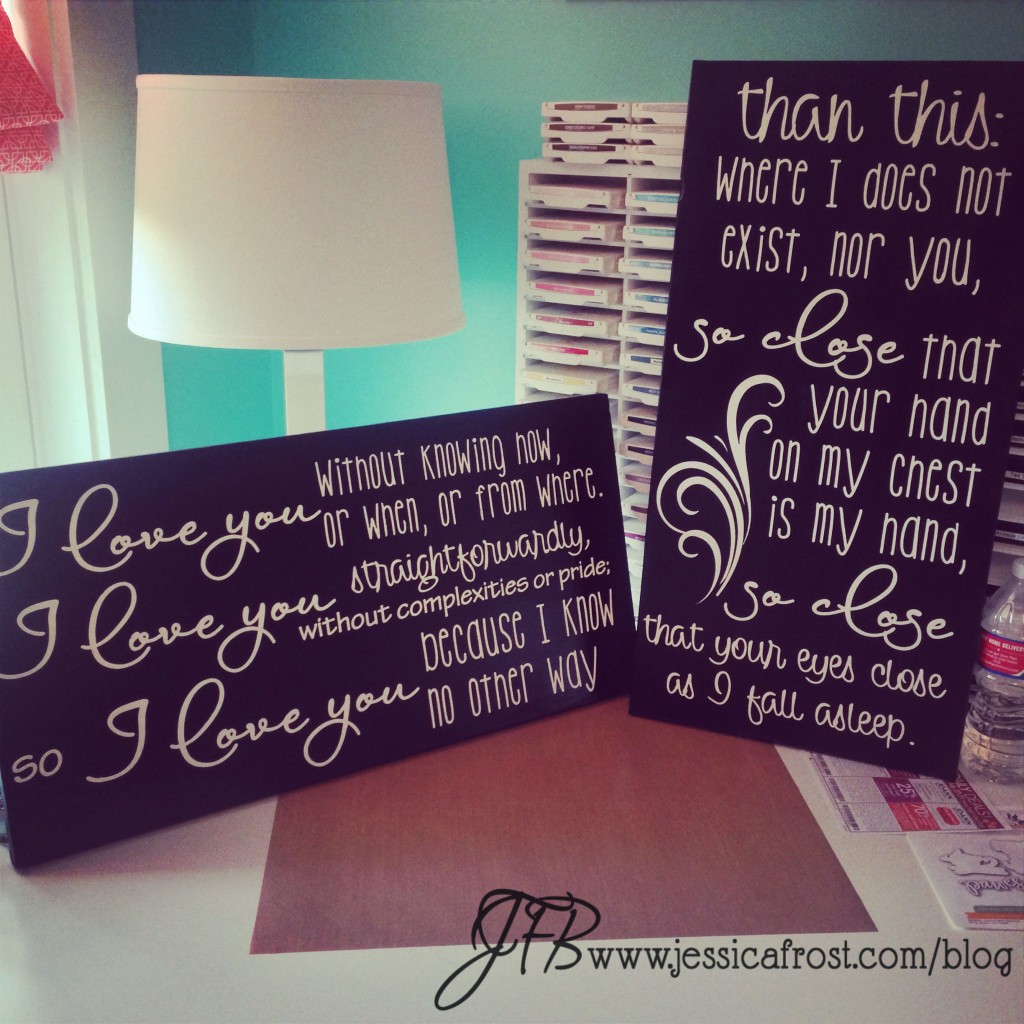 Pinterest is so addictive…I have pinned countless tutorials and examples of vinyl wall art or vinyl canvas art but have always been afraid to try it myself.  My Silhouette Cameo and I have a tenuous relationship that I wasn’t quite ready to challenge.  I used to own a Cricut Expression 2 and it gave me nothing but problems.  I don’t know if I was just totally dense but I could not figure out the cut settings for regular old cardstock.  Even the most simple shapes were destroyed in my machine.  I tried everything…fuzzing up the mat, changing blades, changing cut settings, and nothing worked.

After awhile several people recommended switching to a Silhouette so I gave it a shot and I’ve never looked back!  It is SO much more user-friendly and intuitive than the Cricut.  Over the last few months I’ve used it quite a bit on cardstock but hadn’t gotten up the nerve to test it further…wouldn’t want to mess things up! 😉

But our empty bedroom wall has been staring at me and I’ve been trying to figure out what might work in that space.  It’s about a 5 foot wide area between the bathroom door and closet door and it’s directly across from the foot of our bed so it’s a very visible area.  I considered a small gallery wall but decided that I wanted to do something a little different.  After reading through All You Wish Design‘s awesome subway art tutorial I decided to take a risk and see what the Silhouette could do!

Once I decided on vinyl art I needed to decide on a saying or phrase.  At our wedding we had a friend read an excerpt from Kahlil Gibran’s ‘The Prophet’ and an excerpt from Pablo Neruda’s ‘Sonnet XVII.’  Rereading both of them I realized that the sonnet would be perfect for the bedroom as it discusses sleep.  The excerpt I used is:

I love you without knowing how, or when, or from where.
I love you straightforwardly, without complexities or pride;
so I love you because I know no other way

Breath-taking, right!?  It’s always been one of my favorites!  That decision was the easiest part of the process.  Next up was learning the best way to put the text together on the canvases (using different fonts, sizes, etc.).  It took a little experimenting and some feedback from Steve but I finally decided on a layout.

In the beginning I did fight with my Silhouette a little but I think it was mostly my fault because I was asking it to cut some pretty intricate fonts without a mat.  It would get jammed up about 50-75% of the way through.  I really wanted it to cut through in one solid 12″ by 24″ piece because I was wary of trying to get the spacing correct if I cut each text line separately.  I read a few blog tutorials and most suggested that a mat was useful for intricate designs.  So I picked up a mat at JoAnn’s (luckily they were having a great sale) and it really made all the difference in the world!  I can see how easier projects can be cut on vinyl without a mat but I probably won’t try anything else without using a mat.

Anyway, it was definitely a whole weekend project (and now I’ve learned the definition of light coats of spray paint) but I’m very happy with the results.  There were a couple rips where I had put down too much spray paint and couldn’t easily remove the vinyl but it was nothing that a black sharpie and a little white craft paint couldn’t fix.  I’m going to let them sit overnight and then I’ll modge podge the whole thing to seal and finish it.  I ended up going with one vertical canvas and one horizontal so I’ll need to find a nice photo from our wedding that I can use to balance out the arrangement!  But I can tell that I’ve woken the beast….combined with the sale that JoAnn’s had this weekend on vinyl I’m dying to get back in there and try something else! 😉

Oh and this little Shakespeare quote is actually my very first vinyl attempt.  I completed this on Friday night in preparation of Saturday’s project.  It’s just vinyl on canvas so it skipped the spray-paint-then-remove-the-vinyl-letters steps that the sonnet project required.  The text was also already set up via the Silhouette library so all I was really doing was practicing with cut settings and removing/transferring the letters.  But it’s cute and adds a nice little touch on my craft room wall! 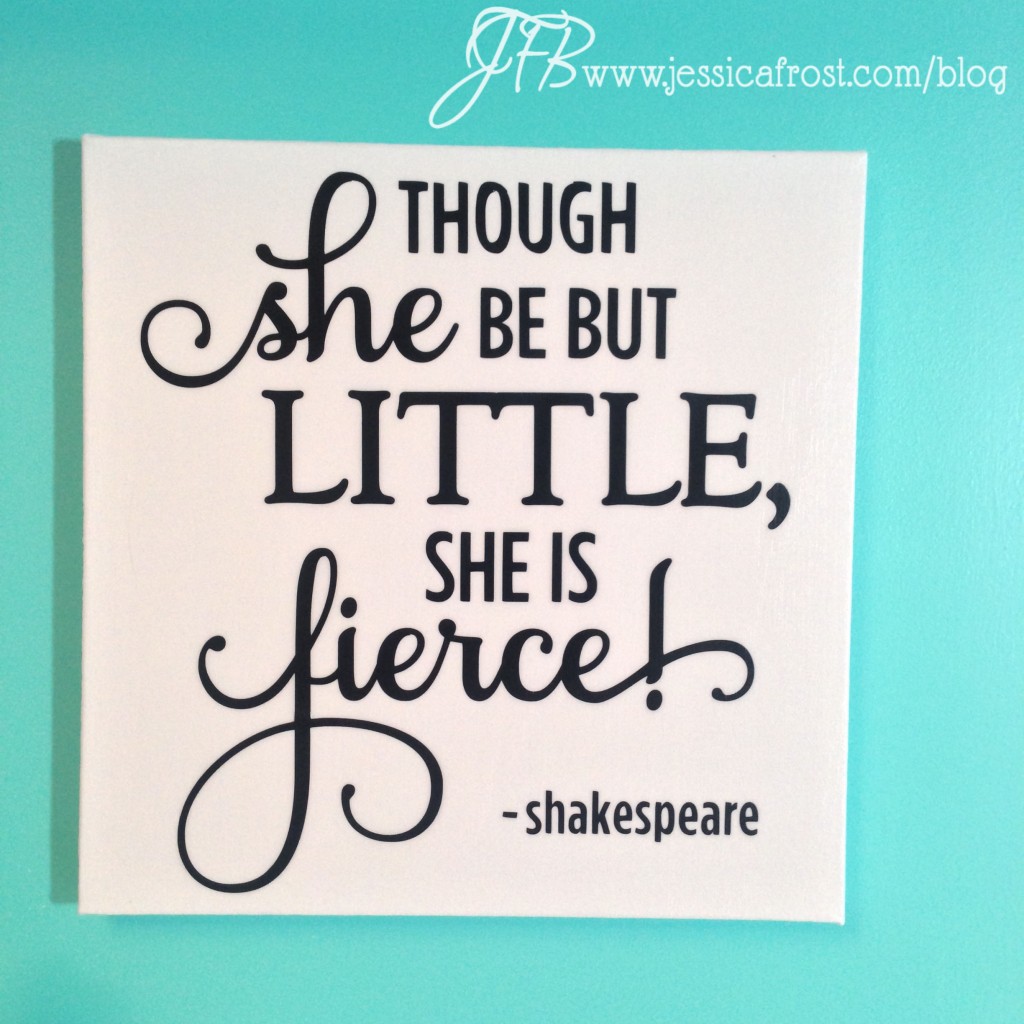