Starting with the master bathroom: for a long time I was set on these tiles from Oceanside Glass Tile in Oasis.  However, when our builder went to place the order we found out that 1) they are ridiculously expensive and 2) they wouldn’t arrive until September.  Obviously that wouldn’t work for us and our August closing…so back to square one (but in 24 hours or less!).

Again, we were working with our Labrador Blue Pearl granite, black cabinets, and a gray floor tile.  Luckily, I’ve got such a large tile sample showroom in my house now from all the samples I’ve ordered between February and July that it was fairly easy to go “shopping” in my sample bag.  And I settled on this tile, the Loft Blue-Gray Brick Pattern Glass: 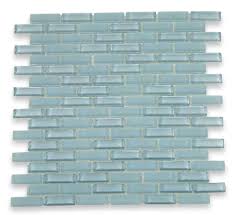 It’s a little bluer than I was originally going for but it looks nice against the granite.  I like that it looks textured with the mix of frosted and glossy glass.  We selected a 2″ square frosted glass tile in the same color for the shower floor and bench.

Unfortunately, now that the paint is going up I’m thinking that our paint choice doesn’t quite work with this tile but I’ll wait and see once the lights are installed and we can see the paint properly.  Fortunately it’s just the one bathroom and would be easy to repaint in a weekend if necessary!

Then over in our kitchen, I was bound and determined to get the Vihara Minka tiles that I had been set on from day 1 of this process.  And I did!  It was a little more than I had hoped to pay and we’re going to be really tight on the time schedule but it will happen!

However, the kitchen sink didn’t quite work out as I had hoped.  Laminate counters usually limit sinks choices to drop-in or top-mount models; however, I had found a company, Karran, that manufactures a special stainless steel sink that can be undermounted to a laminate counter.  Even better, the company only works with certain dealers and our kitchen cabinet company just happens to be one of them!

And that’s where the luck ends…our cabinet installer tried to place an order for the sink on Friday.  Apparently the company is in the process of moving their company from China to Europe so they don’t have any stock available and won’t have them until the middle to end of September.  And all the online companies that claim to have them in stock are LYING!  Argh…every single website I found listed the sink as “in stock” and when I called them they realized that “oops, they’re actually not here and won’t arrive until September.”  So again, back to square one.

This was my list of criteria for a kitchen sink:
-undermounted
-stainless steel
-squared off edges
-single basin
-as big as possible… 😉

The fiasco with Karran sinks meant no undermounted sink (ha, unless we wanted to switch to granite with less than three weeks to go…I think everyone REALLY would have killed me).  So I narrowed it down to two Kohler sinks in the Vault series, a top mounted basin sink and a top mounted apron front.  The basin sink is just a regular old sink but did fit all of my criteria.  This particular apron front is a little different than normal apron front sinks in that it can be used with existing standard cabinets.  We wouldn’t have to order a special cabinet to accommodate the sink.  I found several photos of existing kitchens on Houzz that use the sink and it looks stunning in a modern kitchen setting!  It fits all the other criteria (it’s 35″x23″x9″!) and the best news, it’s actually available!  And that was that!  So, this will be our kitchen sink: 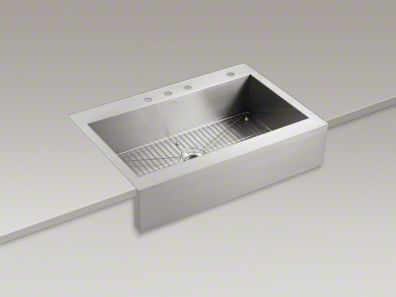 My biggest issue with the top-mount or drop-in sinks is the crud that builds up under the lip of the sink.  All the reviews I’ve read regarding this model indicate that this is one of the best possible sinks for preventing that…we’ll see how it goes!

And finally, we placed our order for the kitchen faucet late last week.  After reading lots of reviews and info online I decided on the Delta Pilar Single Handle Pull-Down Faucet with Touch20 technology and two of the matching soap dispensers for dish soap and hand soap!  I’m really excited about the concept of having a faucet with the touch technology.  It’ll be great to touch the faucet with my arm when my hands are covered in dough or ground meat!  It’ll definitely take some getting used to though… 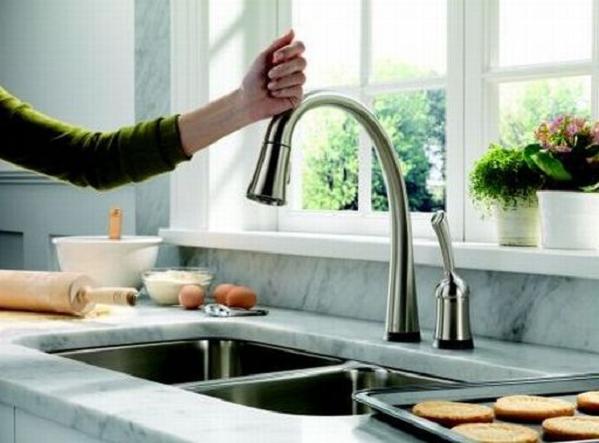 And finally, our other “techie” purchase of the week!  Again, after a good deal of internet research we decided on the “Nest” learning thermostat. 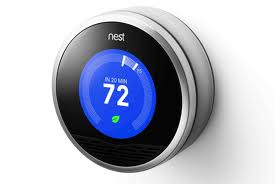 The Nest learns your habits (what temperature you like the house to be…and when you want it that way) and builds a heating/cooling schedule based on your schedule.  Of course, you can override it if necessary and make adjustments.  It’s also controllable through our iPhones so we can check the thermostat or adjust it while we’re away.  The gadget geek in me is super excited to see it in action!

But yeah, my house is smarter than me…the touch faucet and learning thermostat combined with the new touchpad security system…I’m a little afraid that it could take over if it really wanted! 🙂

Anyway, I won’t hope that those are our last big changes or decisions because I know I’ll jinx myself again but I will say that we’re moving right along and getting more and more excited everyday!!