I’ve been meaning to make some summer-themed cards and an unexpected package today prompted the need to pull something together!  It’s been awhile since I blogged about card creations so I thought I’d share these. 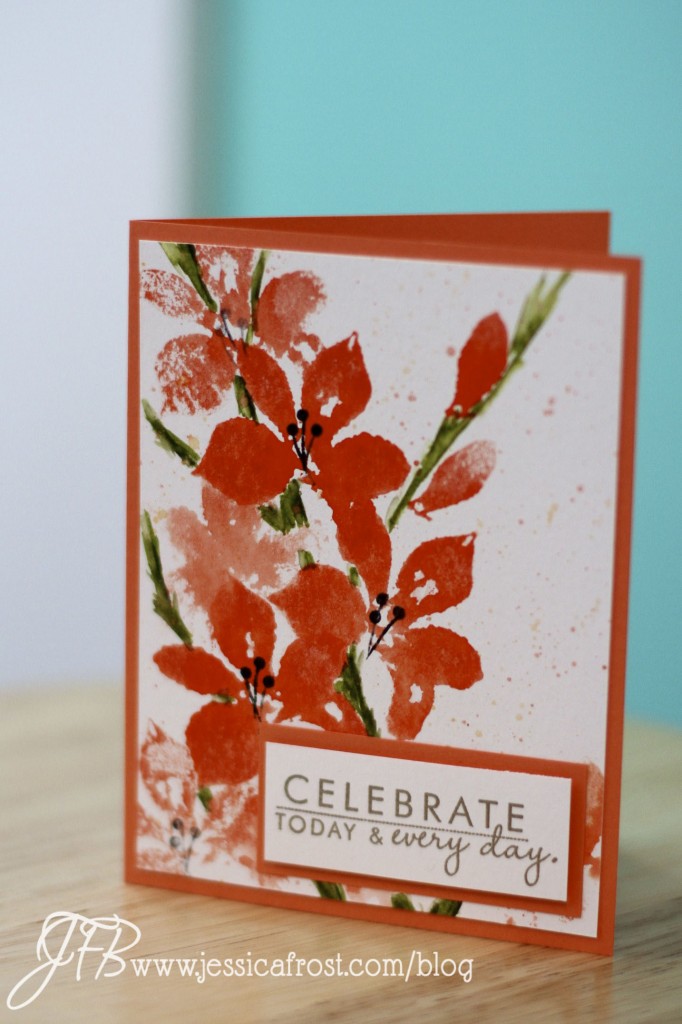 The first card uses stamps from the brand new Simon Says Stamp This is the Life release, Friendly Flowers.  One of my favorite summer flowers are gladiolus.  I love their bright colors and their spiky shape.  When I saw the stamps I realized that one of the stamps almost looked like the flowers of a gladiolus stem.  If I had just stamped them with dye inks I don’t think it would have conveyed very well.  Watercoloring with distress ink gave the flowers a softer look that worked well to turn them into a gladiolus stalk.

To start off I took a piece of Tim Holtz watercolor cardstock that I trimmed down to 4″ by 5 1/4″.  I stuck the flower from the stamp set onto an acrylic block and stamped it in ripe persimmon distress ink.  I made sure there was a lot of ink on the stamp and then I spritzed it twice with water before stamping it onto the card.  When stamping the first darkest image of the flower I made sure to hold the stamp in place for a few extra seconds to give the ink time to absorb into the paper.  After I took the stamp off I spritzed it once again with water and stamped it again for a lighter flower to give the appearance of depth.

After I stamped the main flowers onto the card I took a peeled paint distress marker and sketched in some stems and leaves.  I highlighted some areas with a forest moss distress ink marker and then took a damp paintbrush and went over the lines to soften them.  Then I masked off all of the flower stamp with post-it tape except for one petal that looked like it could be a bud.  I followed the same idea as before and stamped them onto the stems using ripe persimmon distress ink.  Then I took the three dots and small stem stamps from the same set and used Memento tuxedo black ink to create stamens for the flowers.  I also used generation stamping to get the lighter colored stamens.

I finished the first layer by smushing ripe persimmon and dried marigold distress ink onto an acrylic block and spritzed it with water.  I took a damp paintbrush and swirled it in the wet ink then flicked the brush to splatter ink drops on the front of the card.  Finally I spritzed the entire card front with shimmery pearlized water using the perfect pearls powder in perfect gold mixed with water in a spray bottle.

For the sentiment I took a stamp from Papertrey Ink’s Year of Flowers – Daffodil set and embossed it with Ranger liquid platinum embossing powder on white cardstock.  I matted the sentiment with coral cardstock and gave it a little dimension by using foam mounting tape to adhere the sentiment to the card front.  Then I mounted it to a 4 1/4″ by 5 1/2″ coral card.  After assembling I decided that I wanted an extra sparkle on the card so I went over the darkest flowers with the Wink of Stella clear glitter brush.

It’s not scientifically accurate but it looks enough like a gladiolus for me! 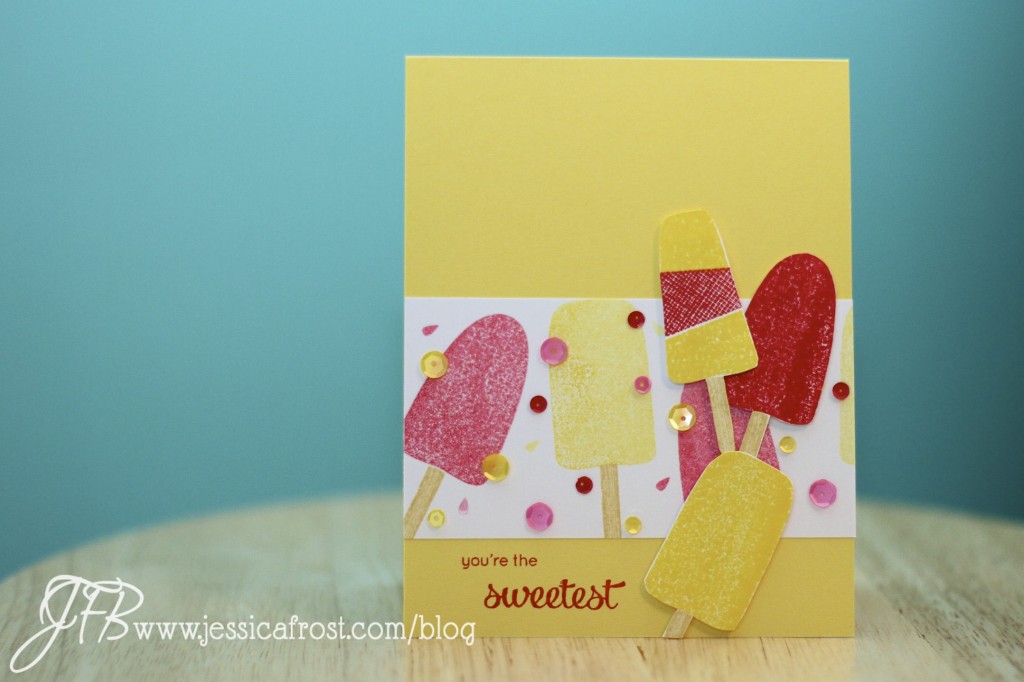 The next card uses the Papertrey Ink Summer Sweetness stamp set and matching die.  I started by taking a strip of white cardstock and stamped several popsicle shapes used the Studio Calico Color Theory dye inks in well red and sunny day.  I stamped the images first on a piece of scrap paper and then used the second stamping for the strip.  I also stamped a few melting “drops” the same way.  I stamped the popsicle sticks with Stampin’ Up ink in so saffron.

I die cut the three popsicle shapes and stamped them with the same ink colors but used the first stamp for a darker color.  I trimmed the die cuts so there was no white showing…unfortunately after I took the photo I realized that there was more white showing than I realized on one of the popsicles so I went over the edges with a yellow marker.  The card base is yellow cardstock and measures 4 1/4″ by 5 1/2″.  I popped the die cuts off the card front with foam tape and then added a few Pretty Pink Posh sequins for extra sparkle.  The sentiment is also stamped in well red and is from the same Papertrey Ink set. 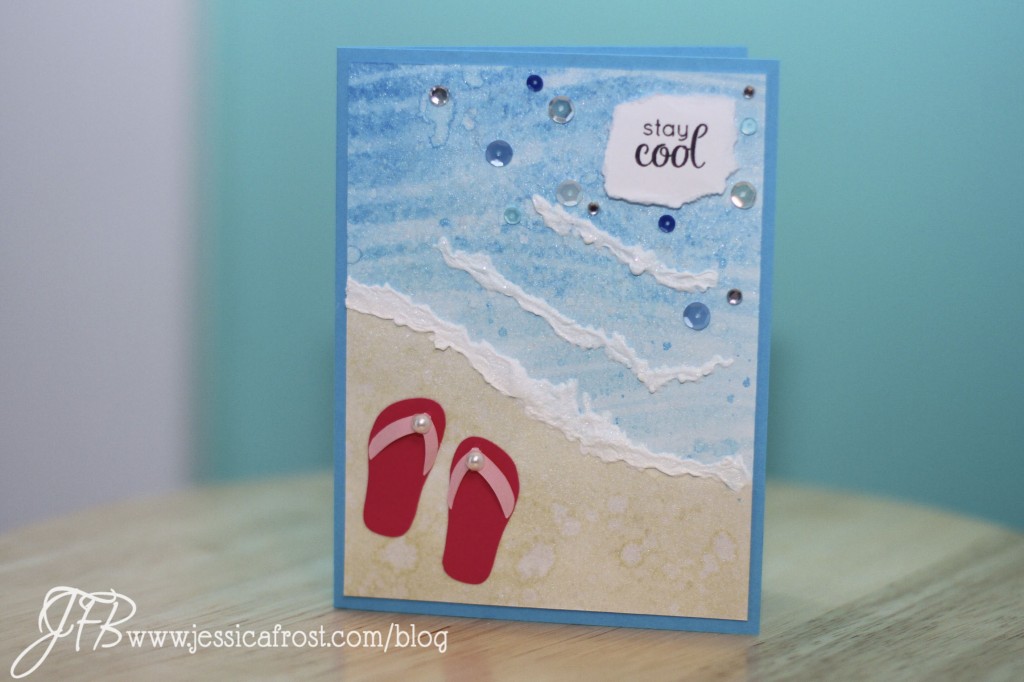 The last card gave me the most trouble but it’s also the one I like the most!  I’ve seen several cards using puffy paint to give the illusion of snow but I wanted to try using it to make the waves more realistic.  This card has A LOT of steps but there’s lots of room for improvisation.

I started off with a 4″ by 5 1/4″ piece of watercolor paper that I temporarily adhered to a cutting board so that it could be easily picked up to be heated.  I took a piece of scrap paper and ripped it so that it gave me the curved edge for the shoreline.  I taped it to the front of the card and worked on the waves first.  I started off by smushing tumbled glass, salty ocean, and stormy sky distress ink onto an acrylic block.  I liberally wet the front of the watercolor paper with water and then painted the blue inks onto the front of the card.  I then heat set the ink to speed up the process.

Next I took the new Simon Says Stamp wave stencil and taped it to the front of the card.  I used a Ranger mini ink blending tool to blend salty ocean ink on the top left of the card and tumbled glass onto the rest of the card.  It gave a nice muted wave pattern when the stencil was lifted.  Then I took a clean paintbrush, dipped it in water and flicked it over the card for some splatter.  Finally I sprayed the waves with pearlized water using the Perfect pearl powder mixed with water and heat set the paper.  That gave the waves a nice shimmer and the splatter from the wet paintbrush helped give it a little depth and dimension.

Then I took the other half of the scrap paper and taped it over the waves so that I could focus on the sand.  For the sand I followed the same idea as before but used antique linen.  After I heat set it I used a mini blending tool and pounced on more antique linen so that it was a little darker.  I also splattered it with a wet paintbrush.  Finally I took a mini blending tool loaded it with Ranger perfect medium and covered the sand area.  Then I took the Perfect Pearls pigment powder in biscotti and brushed it over the wet perfect medium to give the sand a little more shimmer.  To set the powder I spritzed it with pearlized water using perfect gold Perfect Pearls and let that air dry.

Once that was dry I used Tulip puffy paint to paint on the foam from the waves.  I applied it in a fairly thick line and while it was still wet I sprinkled on a little Ranger Clear Rock Candy dry glitter and a little Glitter Ritz white glitter.  Then I took my heat gun and held it over the puffy paint.  You want to be careful not to hold it too close for too long or you can burn the paper.  As the paint heats up it puffs and bubbles and then falls.  As it falls you get a lot of texture and dimension.  Some of the tiny bubbles remain which really helps give it a look of seafoam and waves. 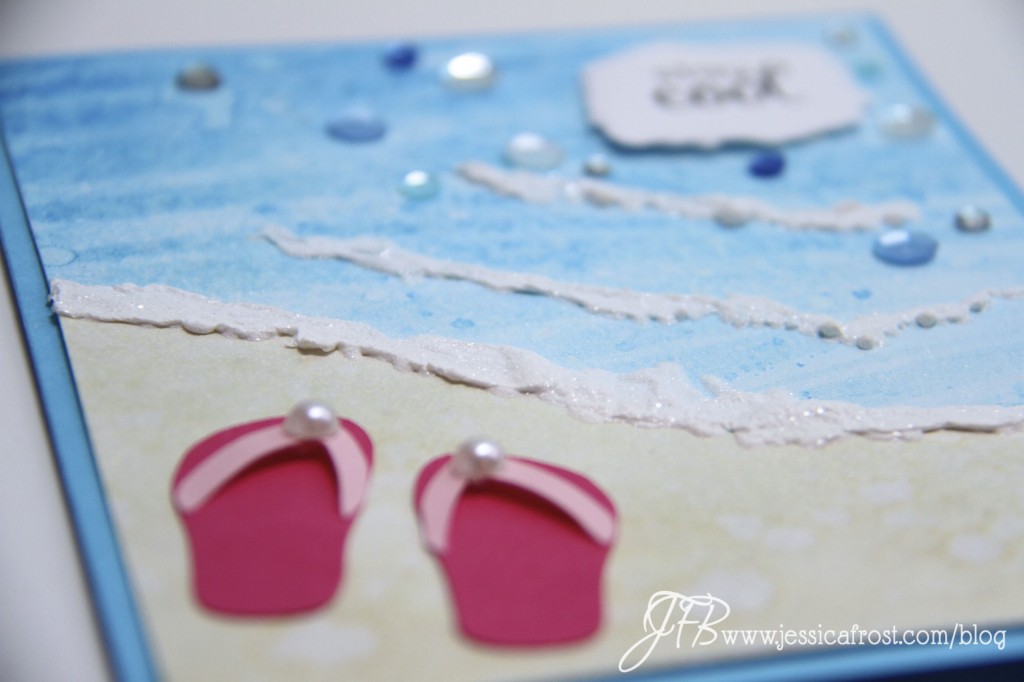 Next I cut the flip flop shape with my Silhouette.  It’s actually part of a border but I trimmed them down to use as two individual shoes.  The light pink straps were cut separately and I rolled them around my index finger to get the right shape.  Each strap had a little notch at the top (where it goes between the toes).  I folded that notch down and then hid a little piece of foam tape behind the notch to pop the straps up.  The ends of the straps were attached with multi-medium matte.  The flip flops were embellished with little pearls and then adhered to the card base.

I tore a piece of white cardstock to get the ragged edges and stamped ‘stay cool’ from the Papertrey Ink Summer Sweetness stamp set with Memento tuxedo black ink.  It’s adhered to the card with foam mounting tape.  The watercolor paper was then adhered to a blue cardstock card measuring 4 1/4″ by 5 1/2″.  Finally I embellished the front with 4mm and 6mm sequins from Pretty Pink Posh and a few round diamonds in varying sizes.