So after we finished at the craft festival we headed off to the National Aviary in downtown Pittsburgh.  I didn’t quite know what to expect but I certainly was not prepared for what we saw!  There were a few birds in cages or behind glass; but for the most part the birds were in open, natural habitats that we could walk through.  They were based on different environments: wetlands, grasslands, rainforest, etc.  It was quite the experience.  I won’t even try to describe the birds we saw…I’ll let the photos speak for themselves! 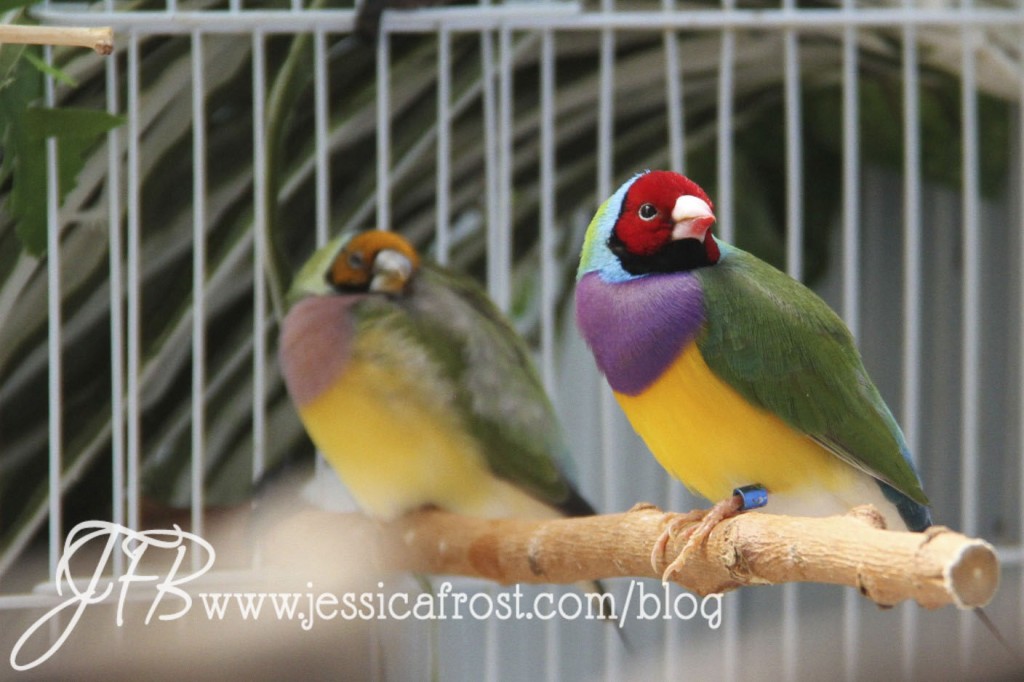 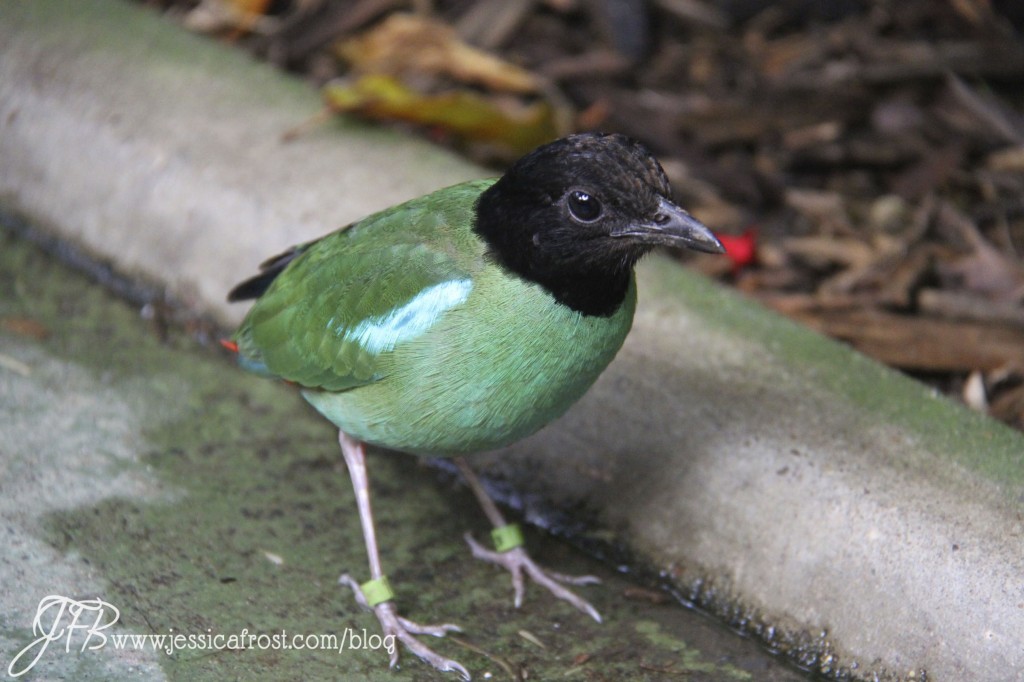 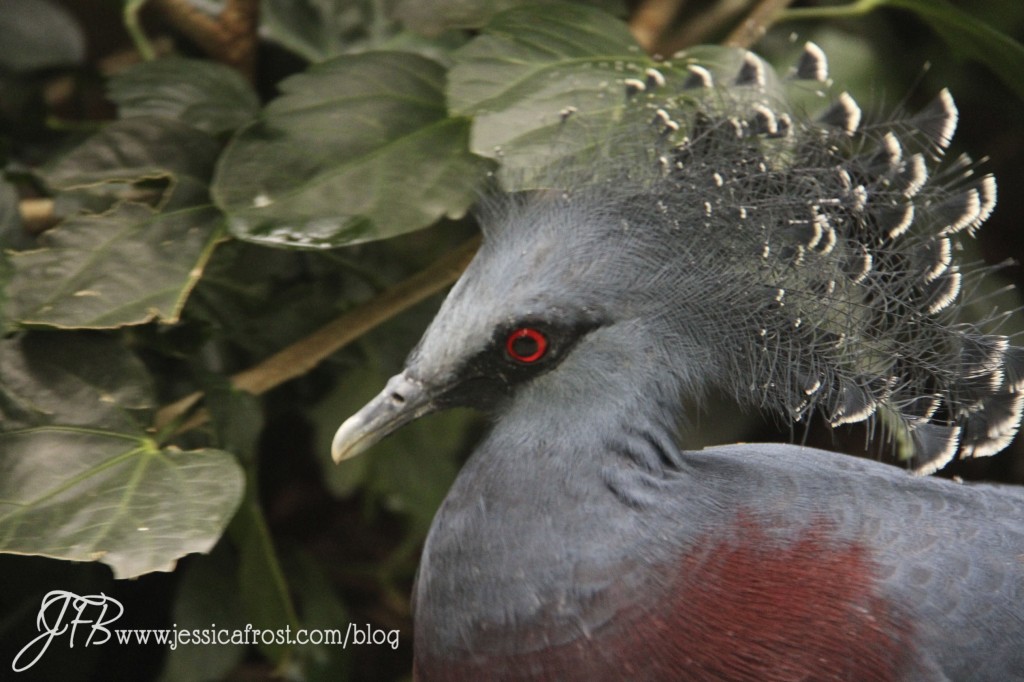 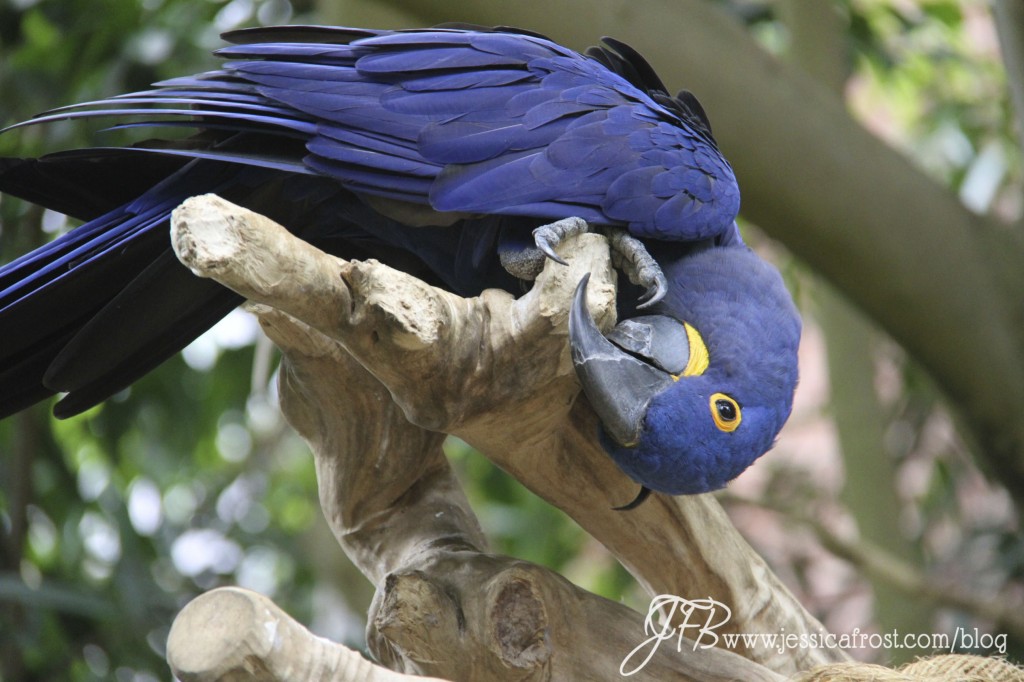 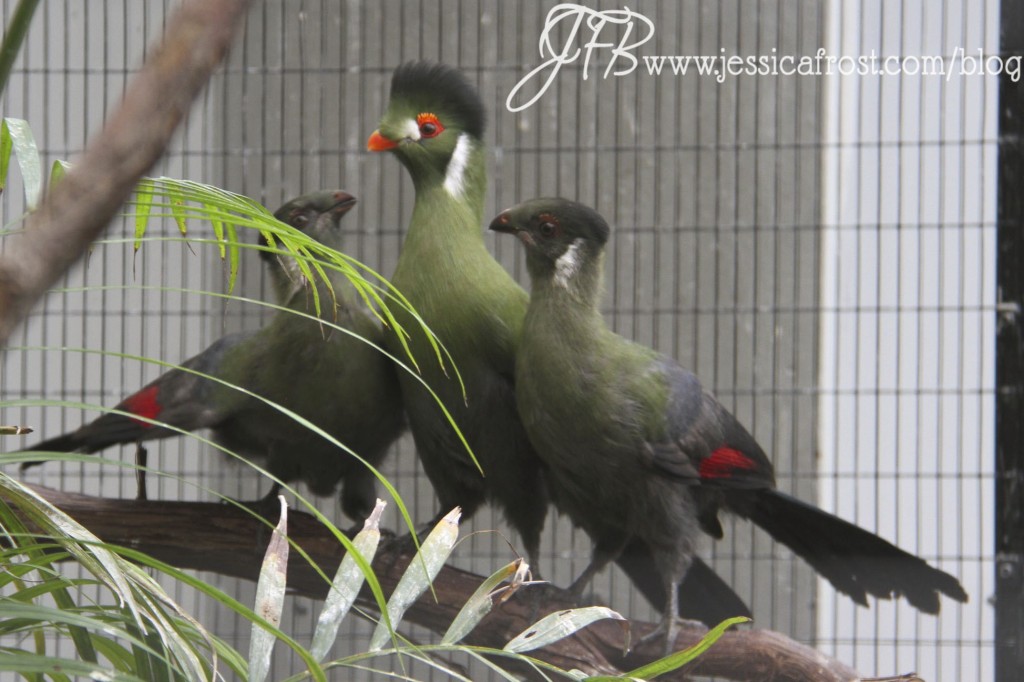 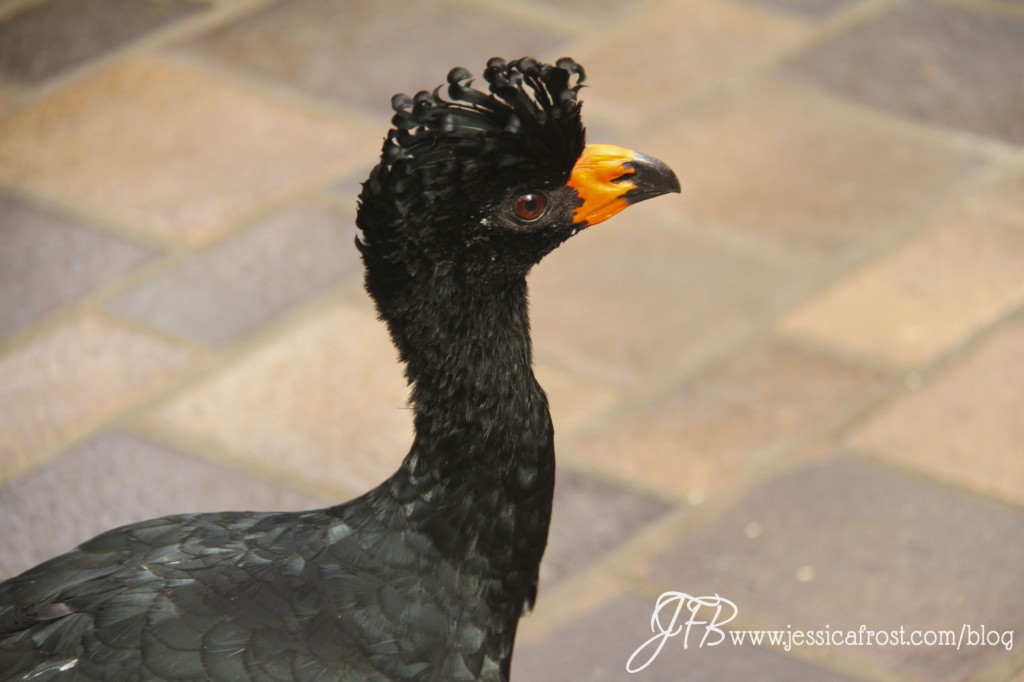 After we left the Aviary we decided to go out for a late lunch.  We headed back to our hotel and traveled along our local street for ideas.  We ended up at a nearby Mexican restaurant called the Steel Cactus.  It’s on the second and third floors of a building and the third floor is open to the fresh air.  If it hadn’t been so humid and warm we probably would have sat up there.  As it was, we sat on the second level and enjoyed the pretty lighting set-up. 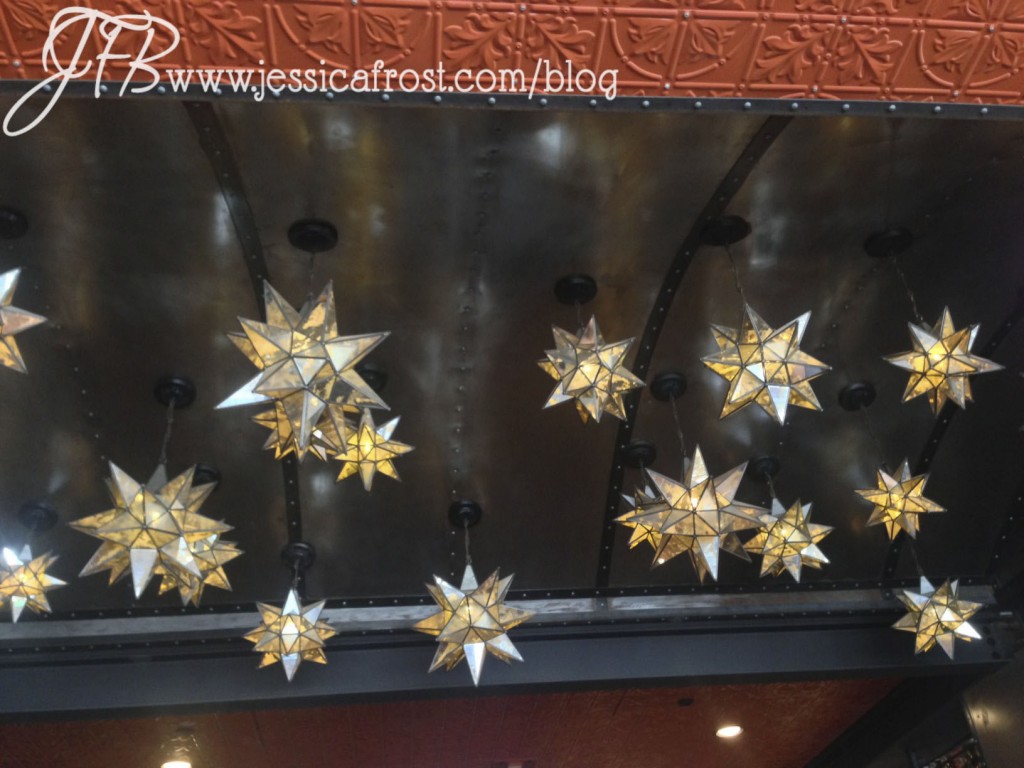 Lunch started with warm tortilla chips and a fresh pineapple salsa.  I never thought of adding raw diced pineapple to salsa but it was AMAZING!  I may have to add that to my summer recipes!  For entrees, Steve had pulled chicken tacos Mexican style (with cilantro, onion, and grated cheese instead of lettuce, tomato, and cheese) and I had the steak enchiladas with Mexican red sauce.  I almost ordered one of the specialties, a roasted beet taco, but I wimped out at the last minute.  I really wish I hadn’t…the enchiladas were tasty but fairly run-of-the-mill.  The beet taco would have been much more unique.  Oh well…maybe next time! 😉 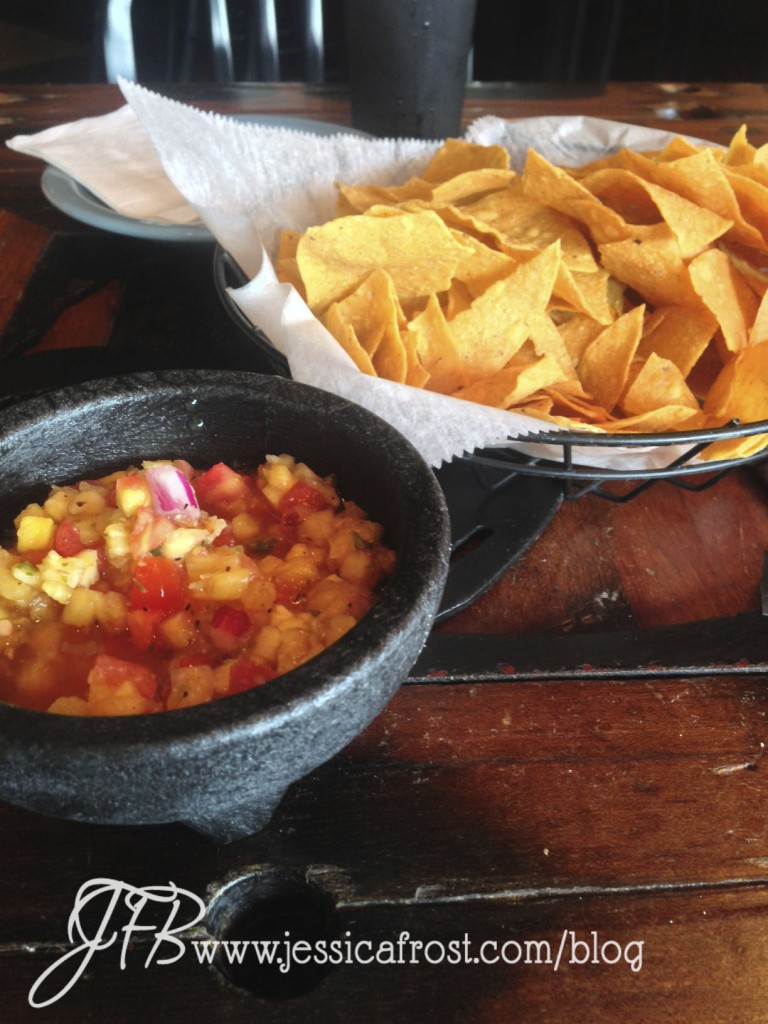 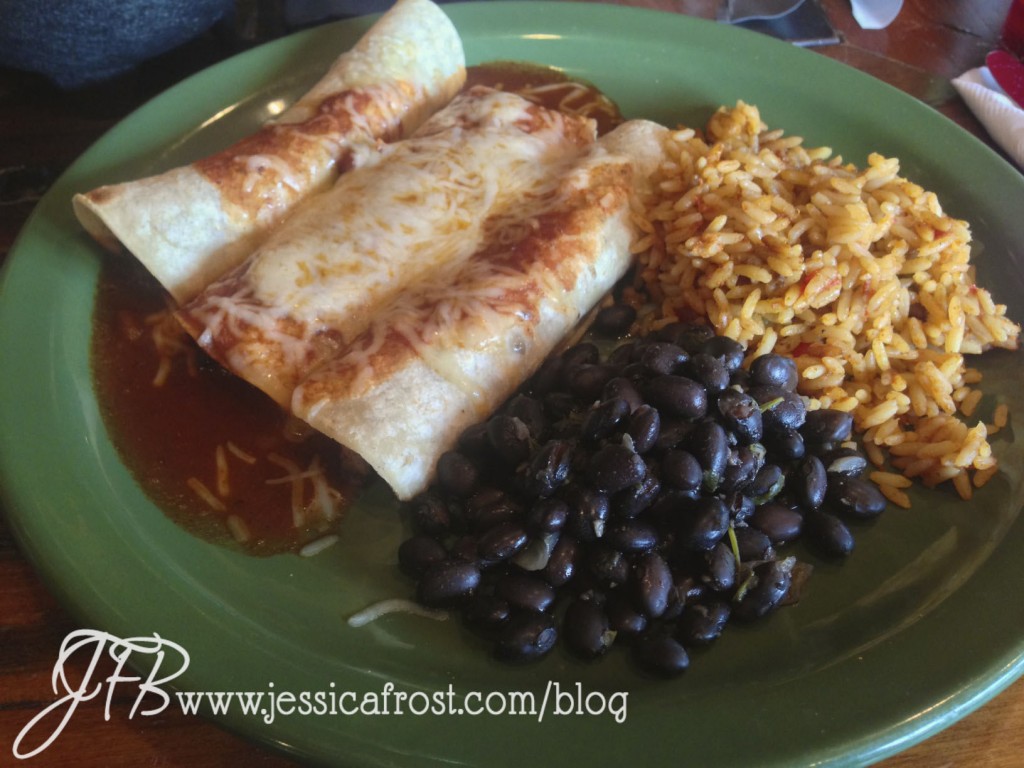 After our late lunch we did a little window shopping and then decided to drive a few streets over to look for a highly recommended pet store.  We found Petagogy and also a well-stocked Japanese grocery store.  We picked up a few toys and treats for Rogue and the boys and a some Japanese snacks and treats for us!  After that we walked over this neat bridge just to see what we’d find…and I’m SO glad we did! 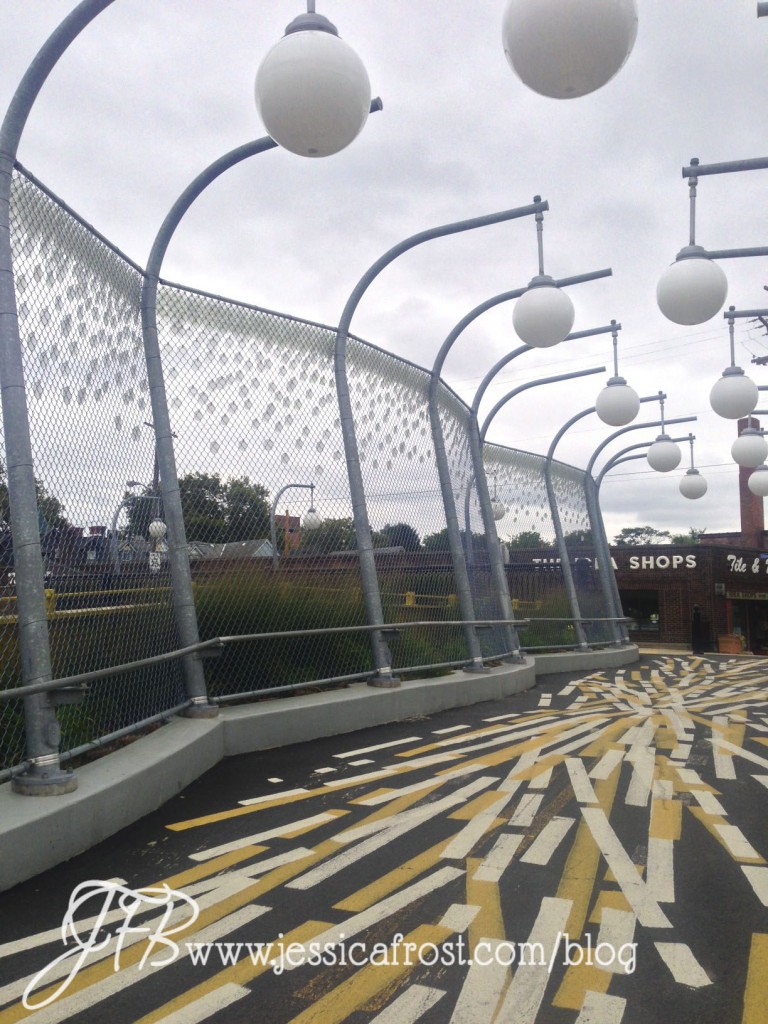 We discovered Oh Yeah! Ice Cream and Coffee which had one of the most interesting ice cream concepts I’ve ever seen.  You choose an ice cream base and your various toppings (they offered squirrel meat!!) and then they use a machine similar to a DQ blizzard machine to mix your toppings into the ice cream.  I had the sweet cream ice cream mixed with baklava, honey, orange peel, and cinnamon.  Steve had chocolate ice cream mixed with brownies and fresh raspberries.  We both had our ice cream in their homemade waffle cones which were equally delicious.  The gelato was incredibly good but I think this ice cream may have won the frozen dessert battle for me. 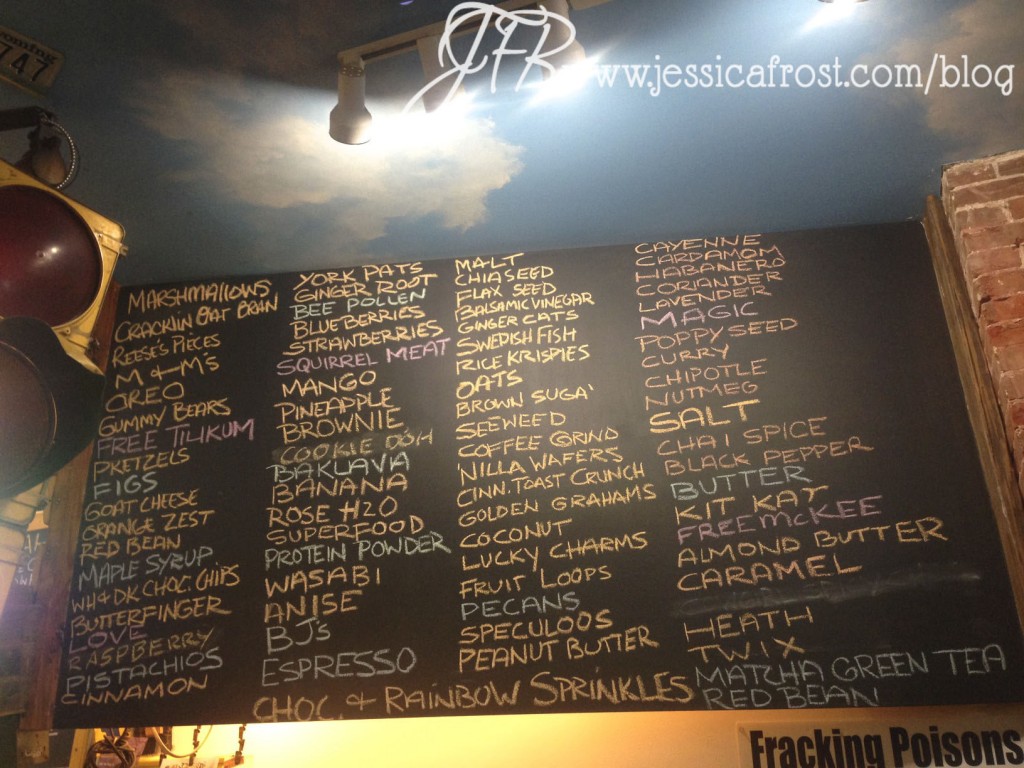 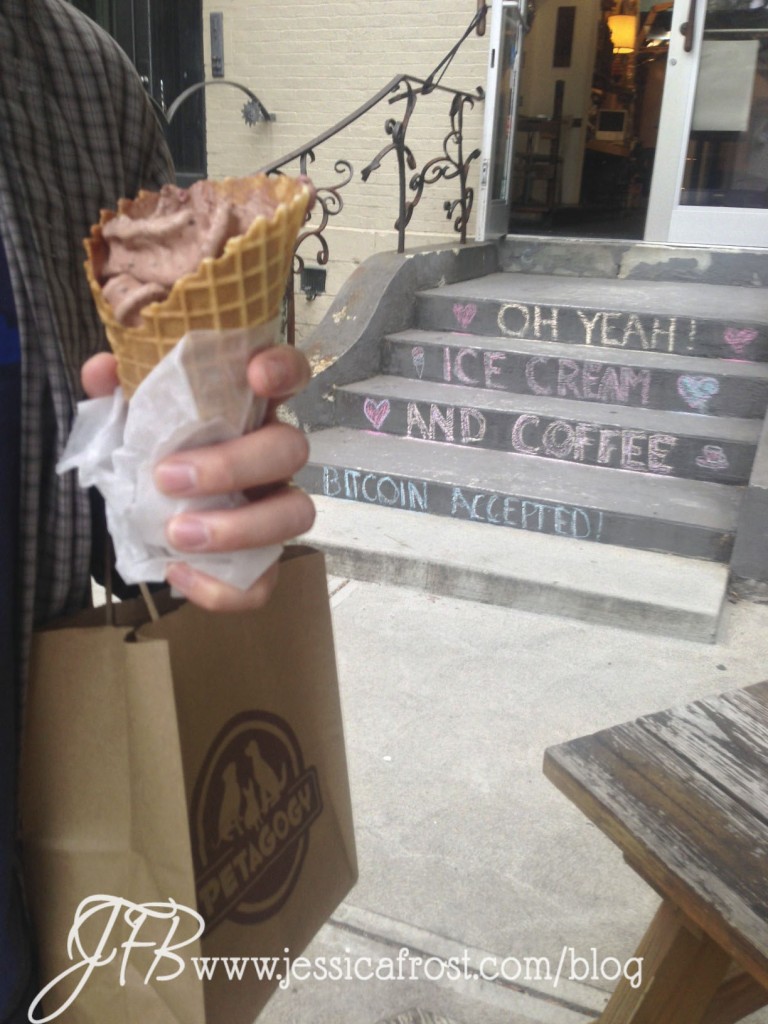 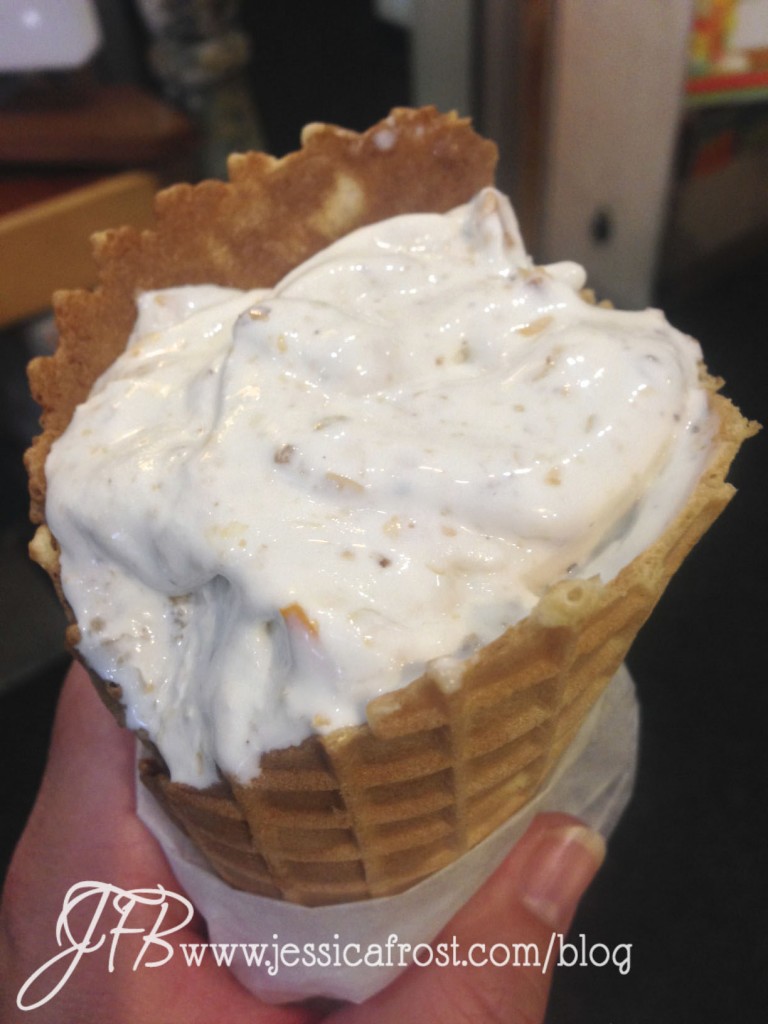 After ice cream we headed back to our car and then the hotel.  We had been planning to see the midnight showing of the Pink Floyd laser show at the Buhl Planetarium but on a whim I checked the full calendar and realized that there was a ‘best of’ Pink Floyd showing at 7pm.  The midnight showing was from one album only (and we didn’t know which album they’d pick in advance).  Considering our growing exhaustion and the fact that we’d have a better shot of hearing some of Steve’s favorite songs from a ‘best of’ set we decided to see the earlier showing.  Luckily that was the one time my GPS did not fail me and we didn’t have any problems reaching the Carnegie Science Center in time.  I’m not the biggest Pink Floyd fan so I fell asleep about two songs in but Steve really enjoyed it.  Before falling asleep I noticed that there was considerable effort put into programming the lights and music.  It wasn’t just random lights while the music was playing…it had been obviously choreographed to line up with tempo and rhythmic changes.  And they do shows for lots of bands and artists: the Beatles, Michael Jackson, EDM, Beastie Boys, etc.  It’s an interesting concept for using the planetarium for things besides astronomy shows.

After that we headed back to our hotel and then walked along our road to find a restaurant for dinner.  We ended up at Girasole which had been highly recommended by our hotel.  It was packed when we arrived so we decided to eat outside and skip the wait for an inside table.  It had rained while we were in the planetarium so it was considerably cooler by dinnertime.  We shared a canteloupe and prosciutto bruschetta for an appetizer and then had pasta for dinner.  Steve had their house-made ricotta and spinach ravioli and I had the house-made spinach spaghetti with mozzerella and fresh tomatoes.  It was another wonderful meal…all in all, I have no complaints about anything we ate while we were in Pittsburgh.  On the way back we stopped at Mercurio’s once more for gelato.  Steve had a nutella gelato shake and I tried their blueberry crumble gelato. 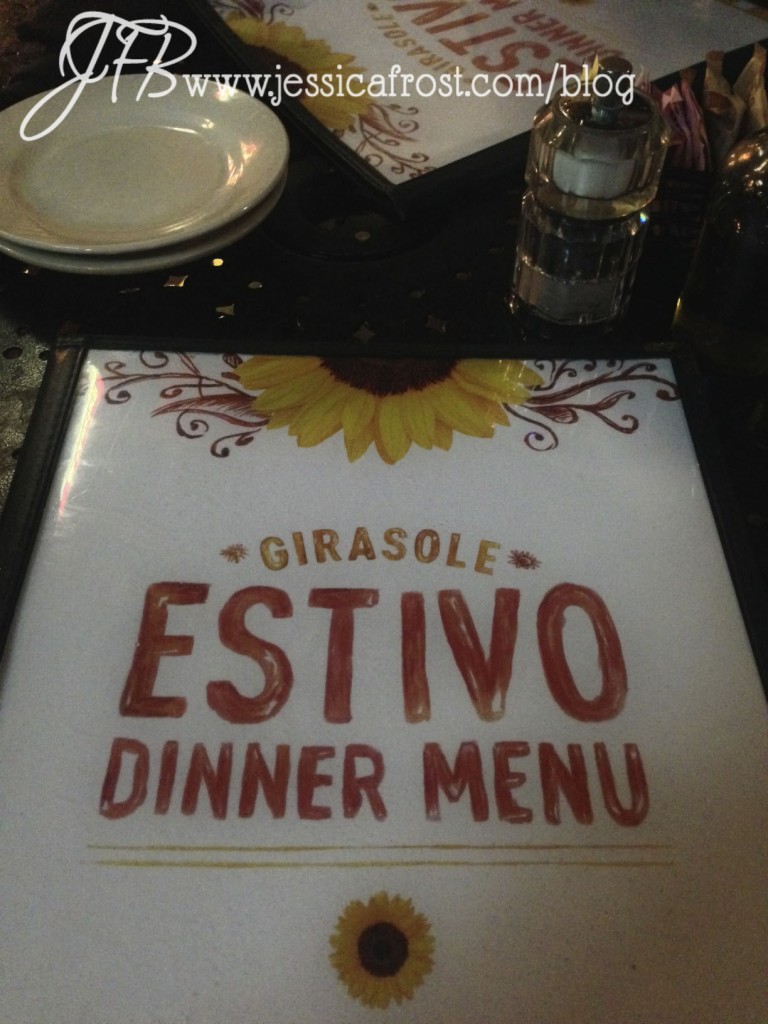 Sunday morning I met my former harp student, Emily, for breakfast at Cafe Moulin.  It’s a cute little underground cafe that specializes in sweet and savory crepes…O.M.G.  We actually ended up ordering the same meal (great minds think alike): nutella hot chocolate and nutella and strawberry crepes.  Hands down, that was the best thing I ate on the trip.  There were so many tasty meals but nothing came close to that crepe.  *Sigh*  I’m half-drooling just thinking about it… 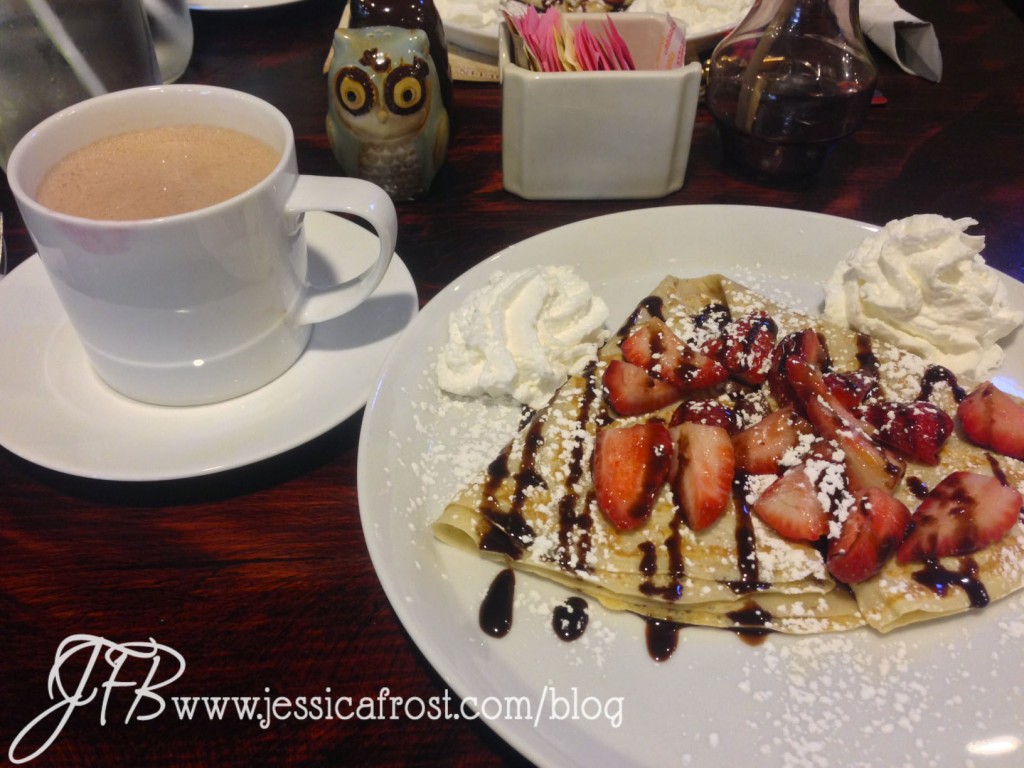 It was also wonderful to see Emily.  She was one of my very first students who I taught for 6 years.  She’s currently living in Pittsburgh and it’s awesome to see her all grown up and living in a big city! 🙂  Plus she always makes me laugh…and is one of the few people who can post unflattering photos of me without too much complaint on my part.  I’m usually having too much fun laughing to think about how I look when we take a photo… 😉 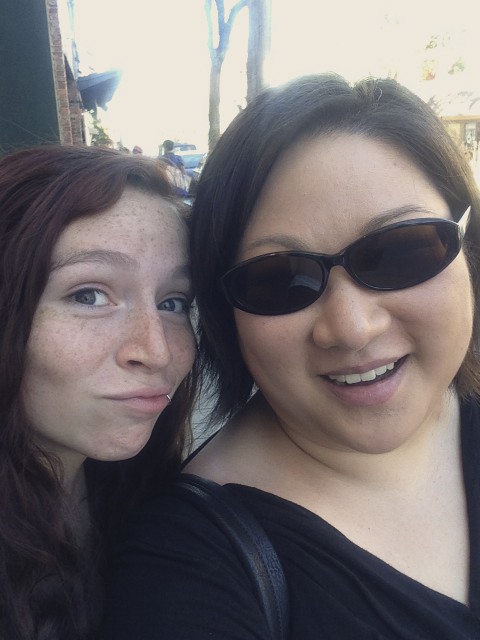 On my way back from breakfast I swung into Prantl’s and picked up a pepperoni roll and an oreo-iced cookie for Steve and hot chocolate from The Coffee Tree Roasters.  I don’t think I’d want to live full-time in a city but it would be fun to be able to walk to so many amazing food options right near my house!

After Steve had his breakfast we packed up and headed to Canonsburg.  After we got back from Pennsylvania earlier this summer we learned that there is a famous chocolate factory based in Canonsburg that we had missed.  So we put it in the plans for this trip and it did not disappoint.  Sarri’s had a huge selection of chocolates and candies!  They also have an ice cream parlor on site but I think we were a little done with frozen desserts by that point.  Anyway, we picked up a few gifts and a few snacks for us and then headed home. 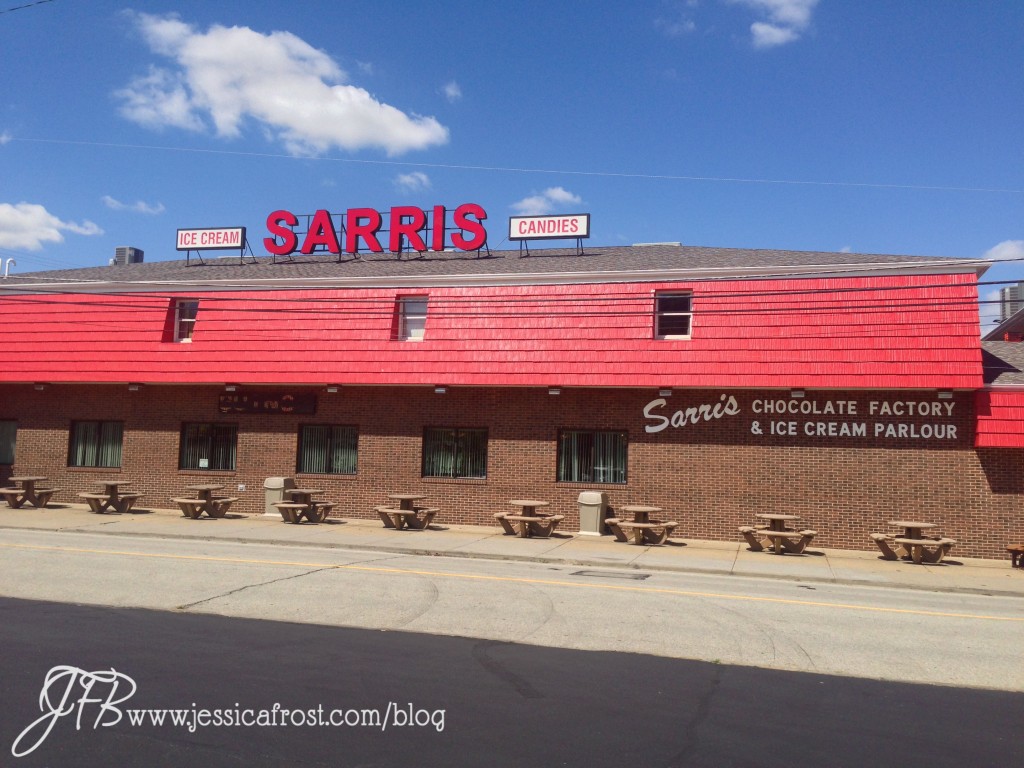 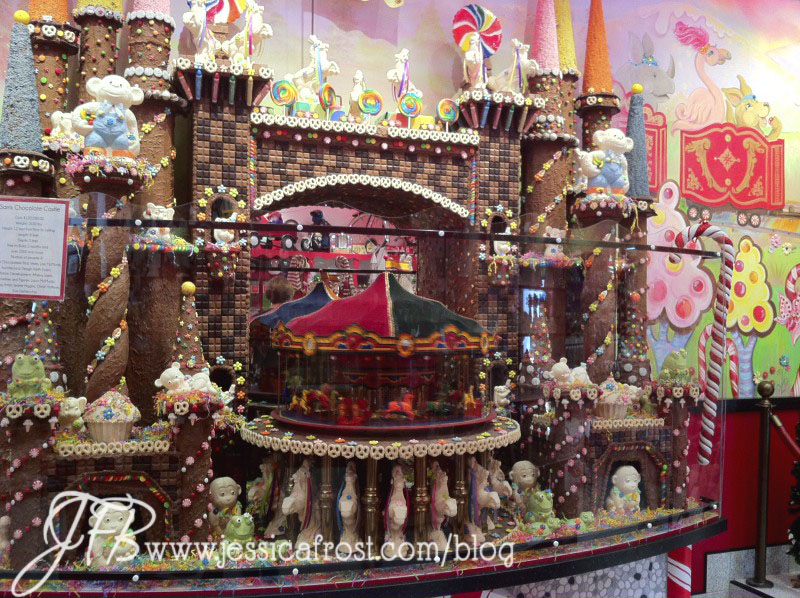 We drove out to my in-laws to pick up the pets and had a quick dinner and pre-birthday pie with them!  We finally got home around 9 and spent the rest of the night getting ready for the week ahead.  So we had a great trip to Pittsburgh, I turned 30 on Monday (and the world didn’t end!), and now we’re back to the regular day-to-day stuff.  This weekend we’re heading to Richmond for the Color Run 5K.  Hopefully I’ll live to blog about that next week!  I’ve also been working on cards for Jessica Lynn Original and will share those later this week!