I have to start this post off with a photo…isn’t she cute!? 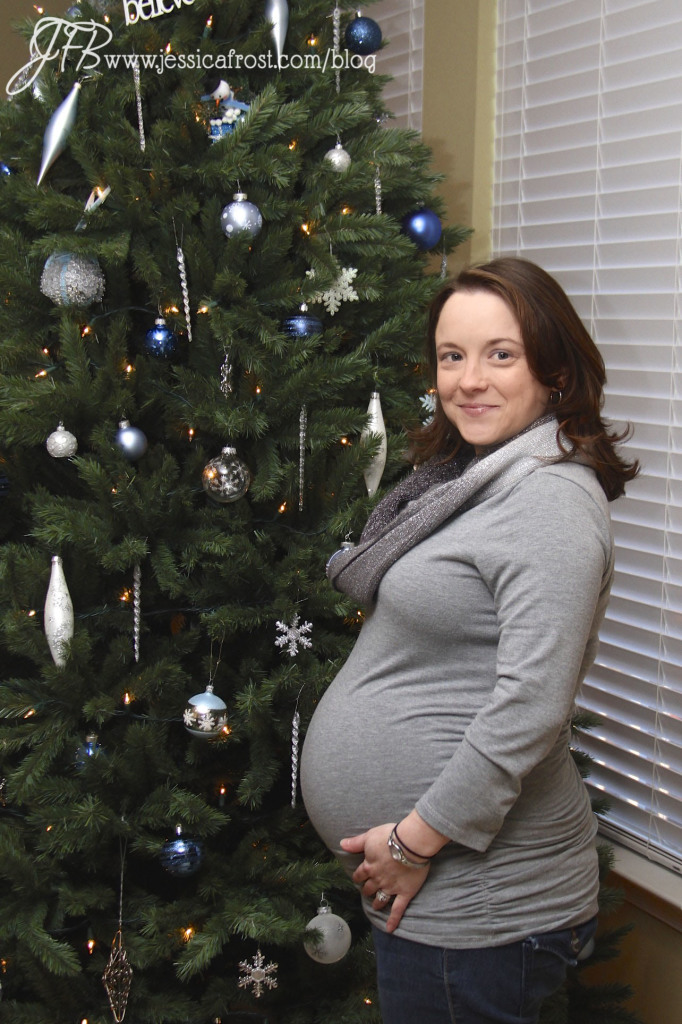 So a few weeks ago I posted about the baby shower invites I created for the shower I was throwing for my best friend, Heather.  I spent the last month putting together the details with her mother-in-law, Pearl Ann, and on Saturday, we held the shower! 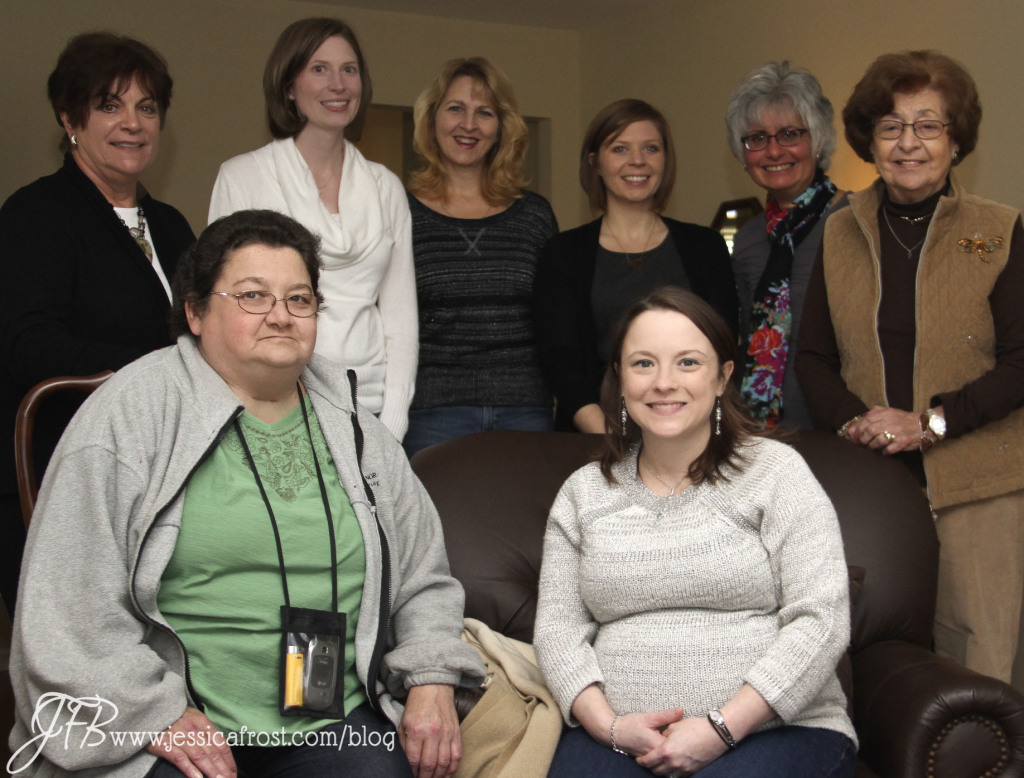 Fair warning…this is going to be a photo-heavy post.  When I first heard that Heather was expecting I started a secret board on Pinterest for a baby shower.  The first thing that I worked on was putting together a Project Life album for her.  I’d heard a lot of good things about the entire Project Life concept but had never used it before.  I found a great tutorial online that was really helpful when setting up the Baby edition book.  We visited her and Richard a few weeks before the shower and I was able to give her the album.  It was fun sneaking around getting family photos from her family members without her knowing! 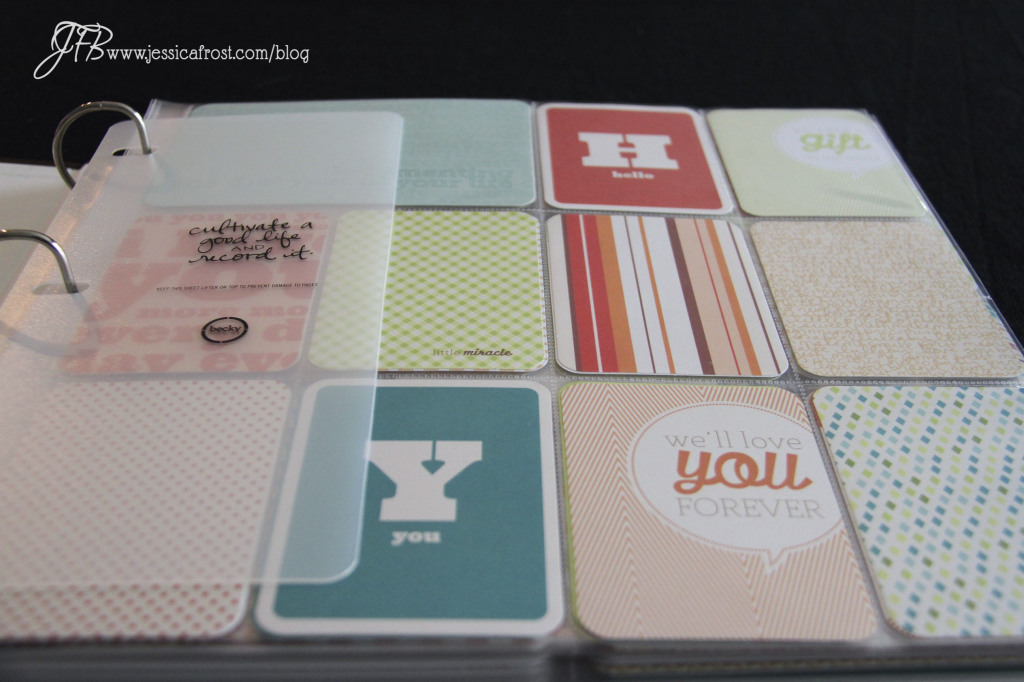 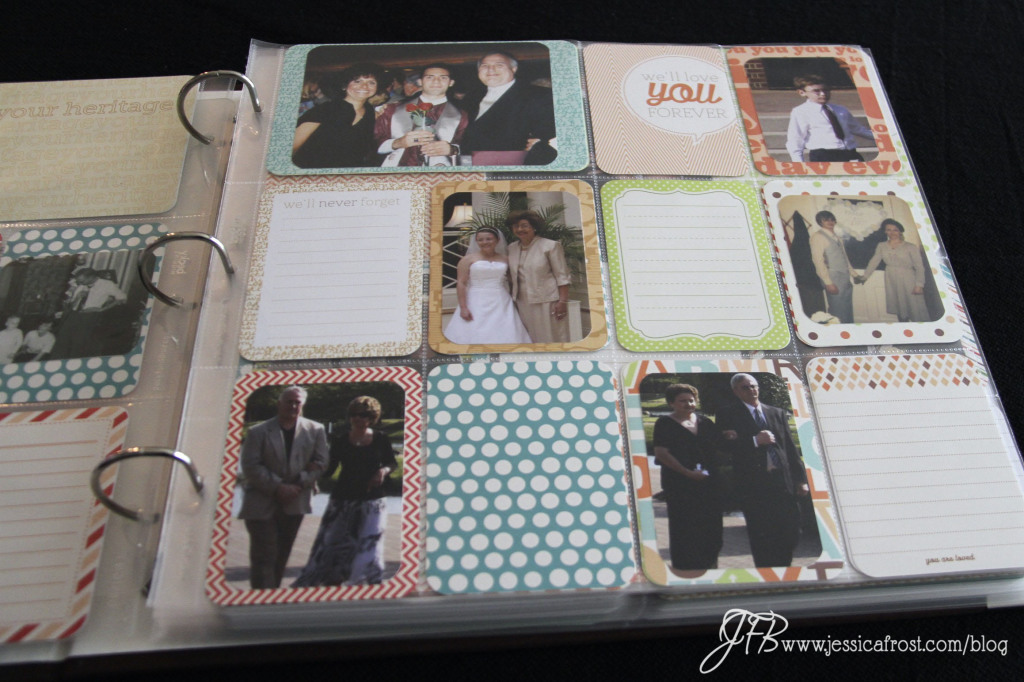 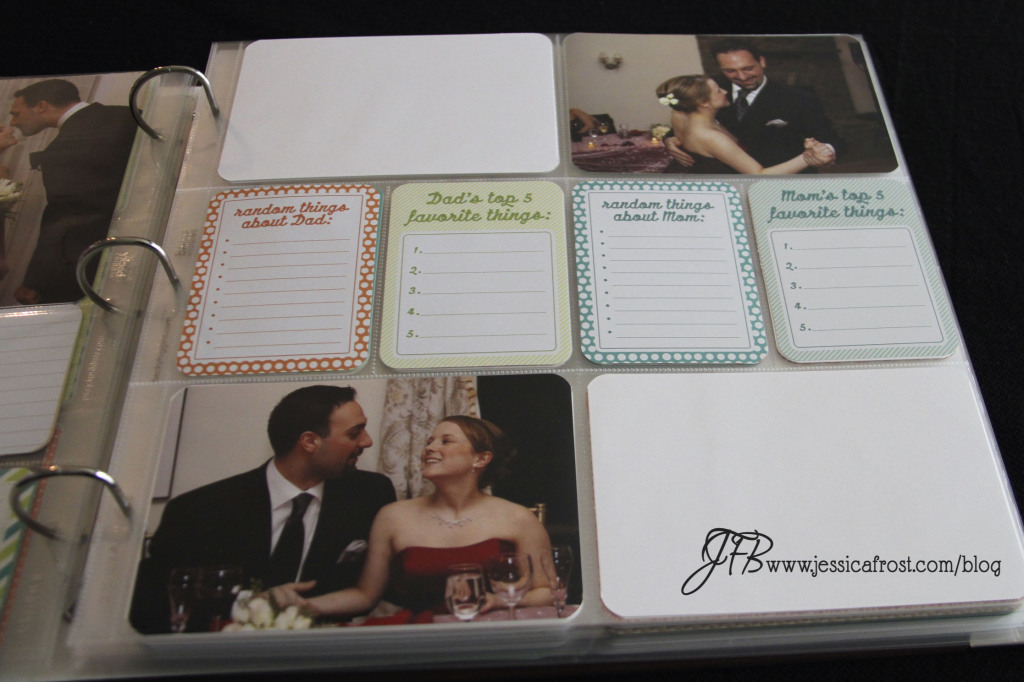 When it came to shower decorations Pinterest was a life-saver.  Pearl Ann was hosting the shower in her home and had a lot of the table linens and decorations for the table.  But I wanted to create something that would help let guests know where the party was!  Unfortunately I just assumed that I would be able to find pumpkins at the craft stores and grocery stores after Halloween but before Thanksgiving…I was wrong.  By the time I went looking I was left with the dregs of the fall decor at JoAnn’s (Michael’s was totally empty).  I ended up with two paper-mache pumpkins and one horribly orange plastic pumpkin.  So I spent last Sunday modgepodge-ing and glittering the two paper-mache pumpkins and painting the orange pumpkin a pretty metallic ivory.  The ivory paint really helped tone down the bright orange.  After the pumpkins had a few days to dry I used my Silhouette Cameo and created a vinyl monogram of the baby’s initials to adhere to the ivory pumpkin.  Luckily the weather cooperated on Saturday and I was very pleased with the way they looked outside.  It helped that Pearl Ann had that great decorative grass in her front yard that really complemented the pumpkins nicely! 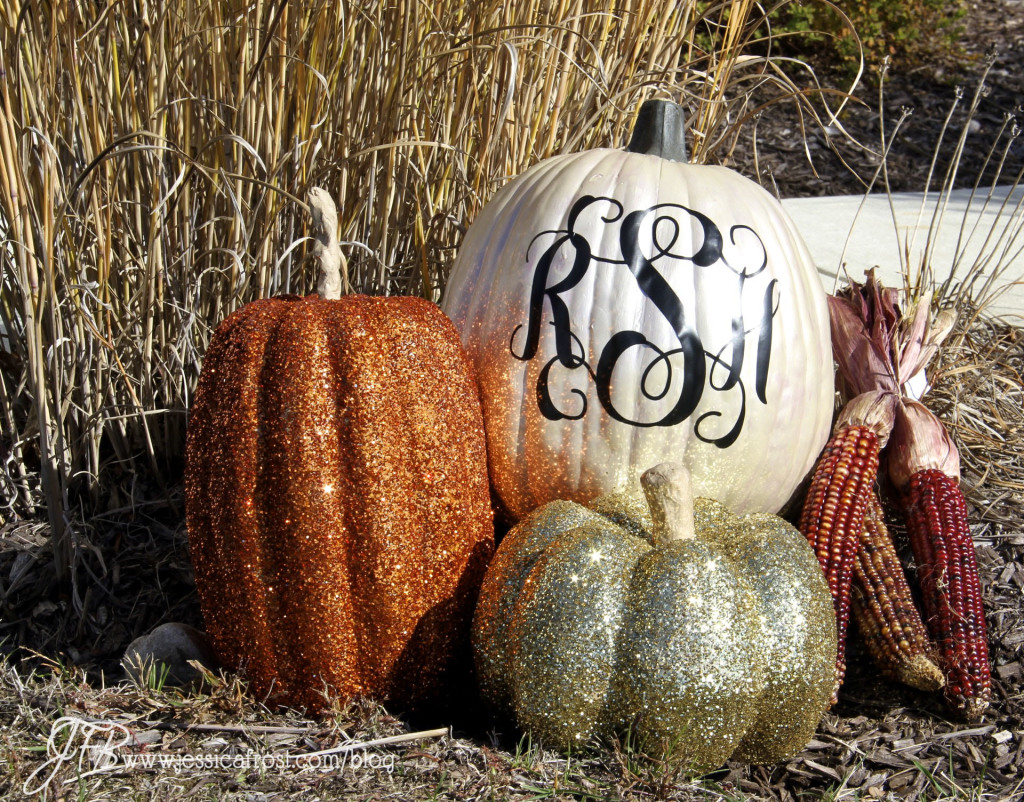 Then I happened to be browsing Pinterest and I saw a fall-themed diaper cake.  I had originally been planning to skip the diaper cake because most of the examples I found just looked so cheesy.  But this one was really cute and tasteful.  So I decided to give it a try…74 diapers later, this is what I came up with! 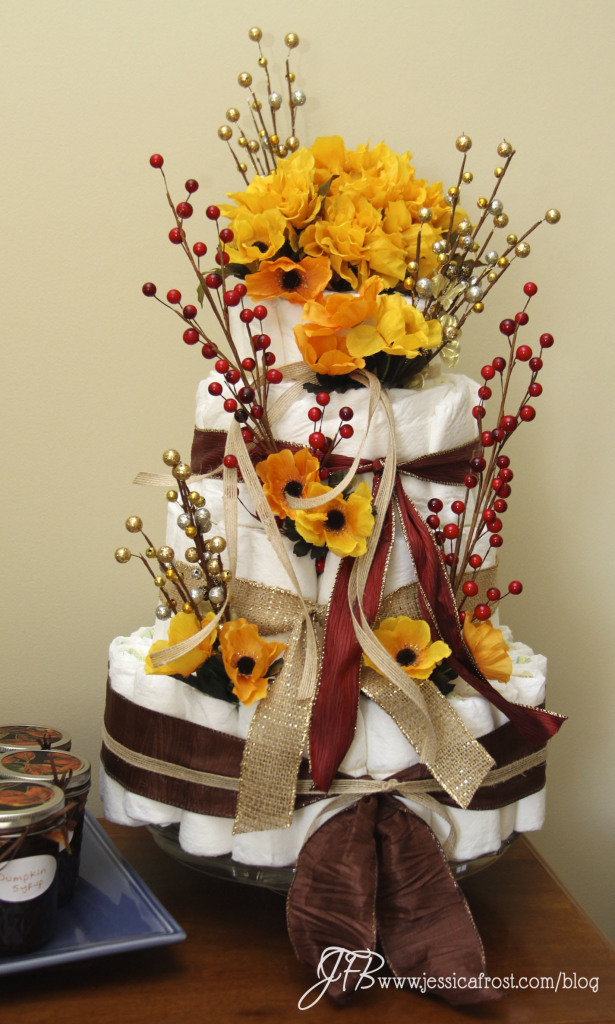 I love those artificial poppies.  I know they’re not seasonally correct but I thought they looked really nice on the “cake.”  I had one shower game and asked the guests to guess the number of diapers used in the cake.  The closest guess was only 6 off!  For awards I put together a little gift bag with a sweet cinnamon Bath and Body works candle, a fall harvest hand sanitizer, and a few orange and dark chocolate Lindt truffles.  They were wrapped in a bright gold and orange wrapper and fit the theme wonderfully!

I also followed this recipe for homemade pumpkin spice syrup from one of my favorite food bloggers,  The Messy Baker Blog and created 1/2 pint mason jar party favors of pumpkin spice syrup.  I had a little leftover to try last week and it made the most fabulous pumpkin spice lattes.  I may be a convert from my usual Starbucks PSL!  I think it would also be amazing on pancakes or waffles!  In the photo below you can see the favors as well as the shower game award in the back corner! 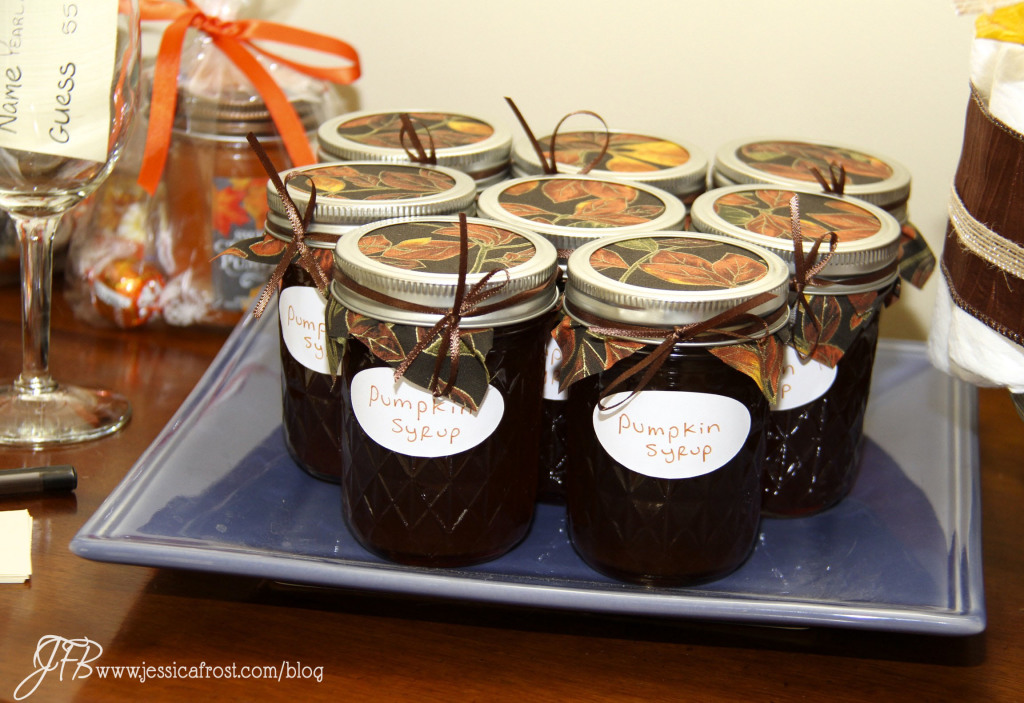 Now onto the food!  Pearl Ann and I agreed to do appetizers (my favorite) and I had a lot of fun trying out some new recipes and tweaking a few favorites for a baby shower!  I was also glad to see that I’m not the only one who makes way too much food! 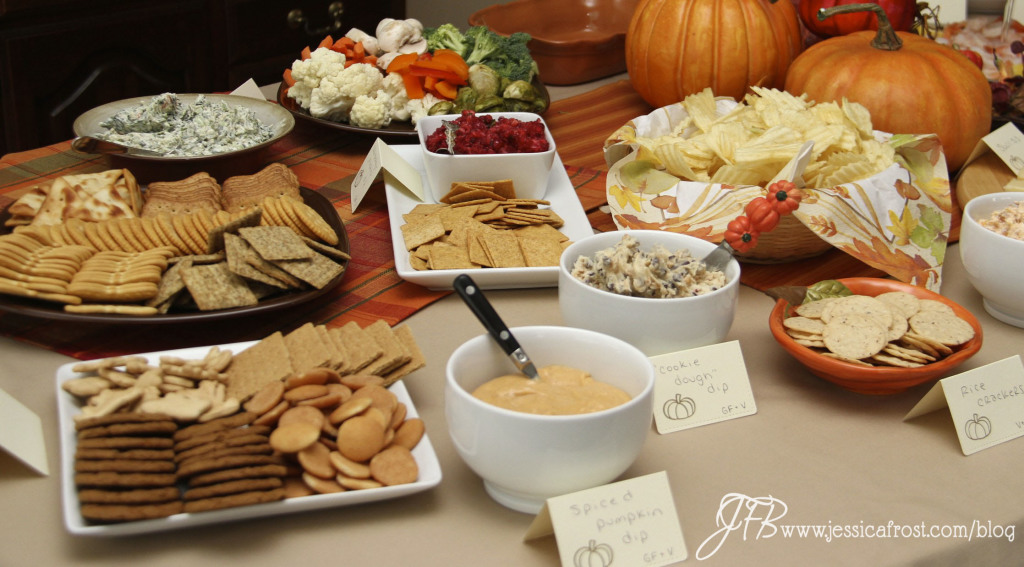 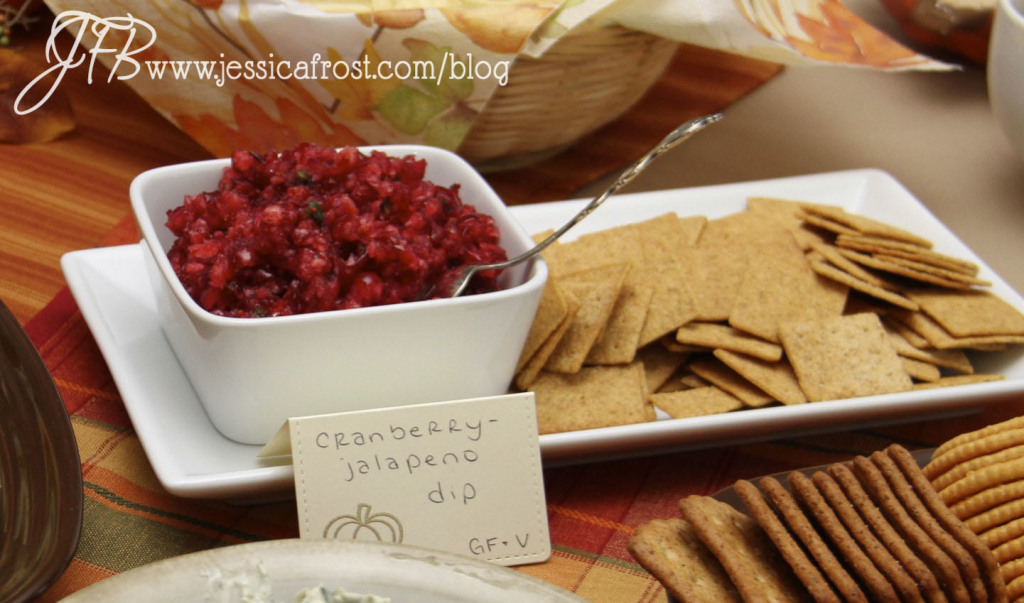 I prepared various dips and relishes with savory and sweet dippers.  The sweet dips were spiced pumpkin dip and one of my favorites, cookie dough dip.  The savory dips were two new recipes, a fresh cranberry-jalapeno relish served over cream cheese and a loaded baked potato dip.  Pearl Ann made a veggie dip with lots of fresh vegetables for dippers.

Then for the more substantial appetizers, Pearl Ann made bacon and sundried tomato tarts, cheese dreams, shrimp cocktail, and glazed cocktail meatballs.  I made crab puffs and caramelized apple and onion tarts with feta. 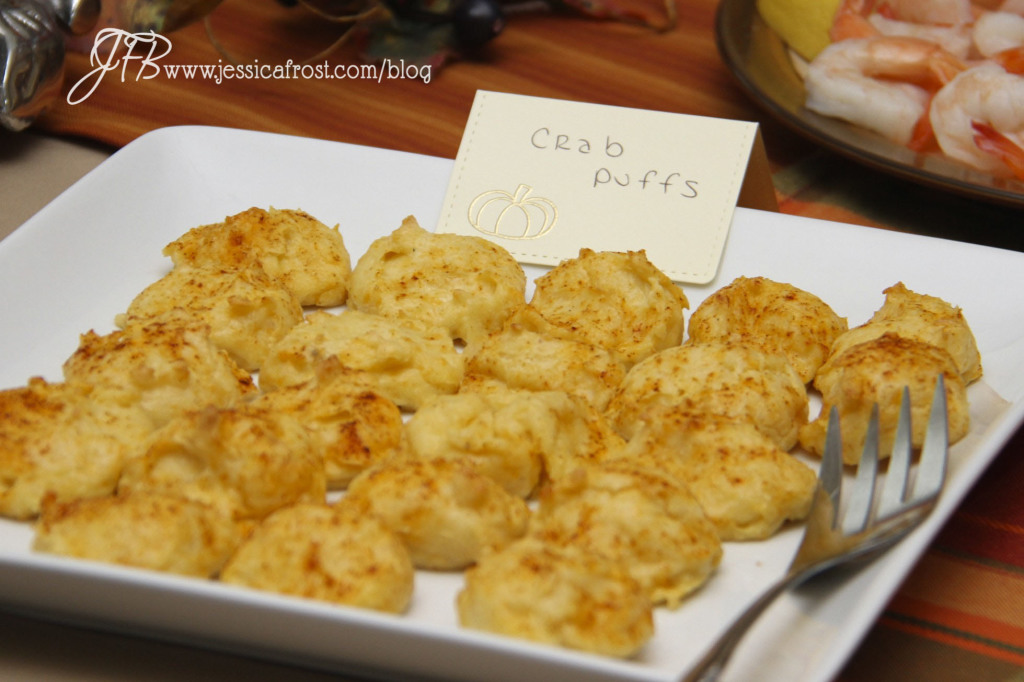 Pearl Ann also put out a cheese board with several of Heather’s favorite cheeses and I found this AMAZING recipe for pumpkin spice almonds for nibbling! 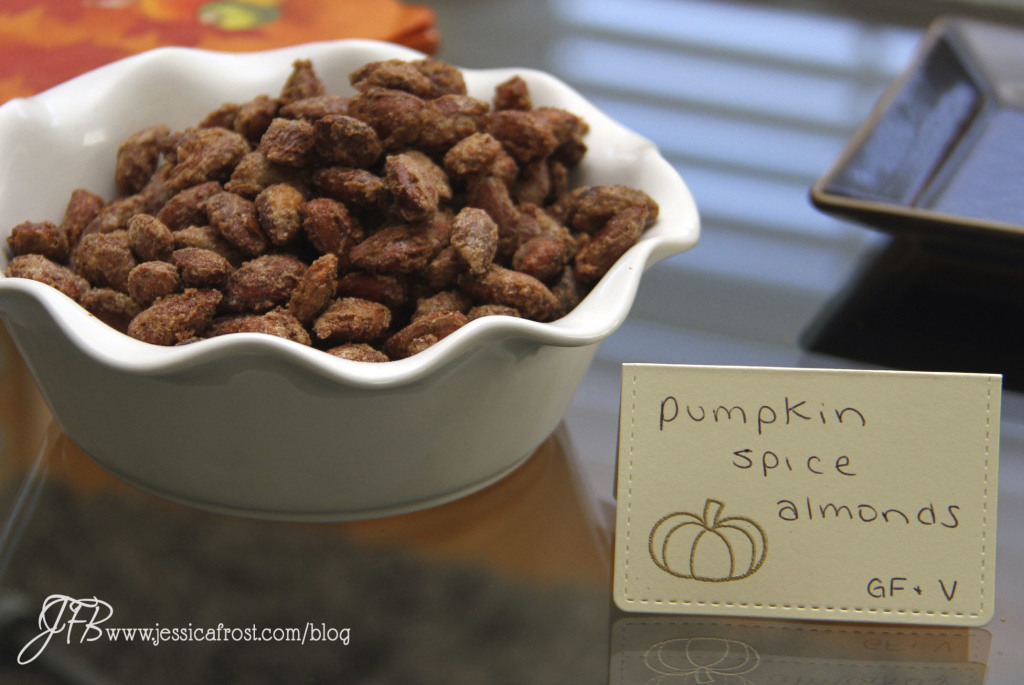 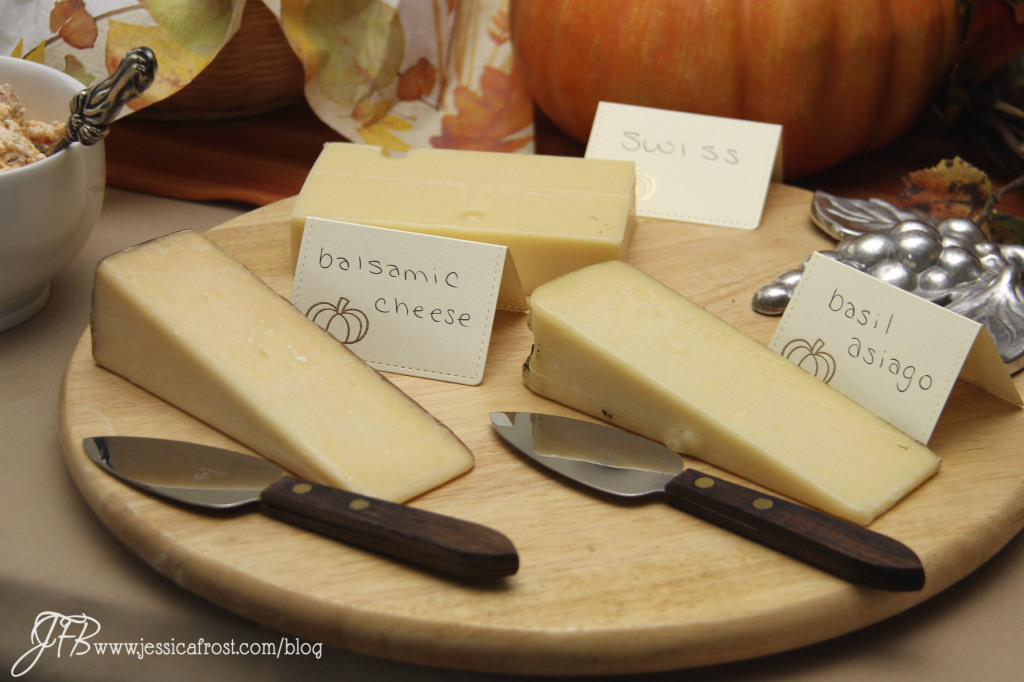 Finally, because people might have been starving we had a few desserts.  Pearl Ann made pumpkin spice cupcakes with a cream cheese pumpkin frosting and Steve helped me earlier this week and made glazed walnut butter cookies.  The cookie recipe is one of our family favorites but I wanted to make them look a little more fall-themed for the shower.  I found this great online tutorial for flooding and marbling the glaze.  The recipe involved making the cookie dough, rolling out and cutting the leaf cookies, outlining them with a buttercream frosting, and then dying three batches of royal icing for the inside flooding.  Steve worked for 7 hours to create the cookies on his day off and then we froze them so they’d stay fresh.  They thawed beautifully and looked great.  Steve definitely has the patience for cake and cookie creating that I seem to lack.  *Sigh*… 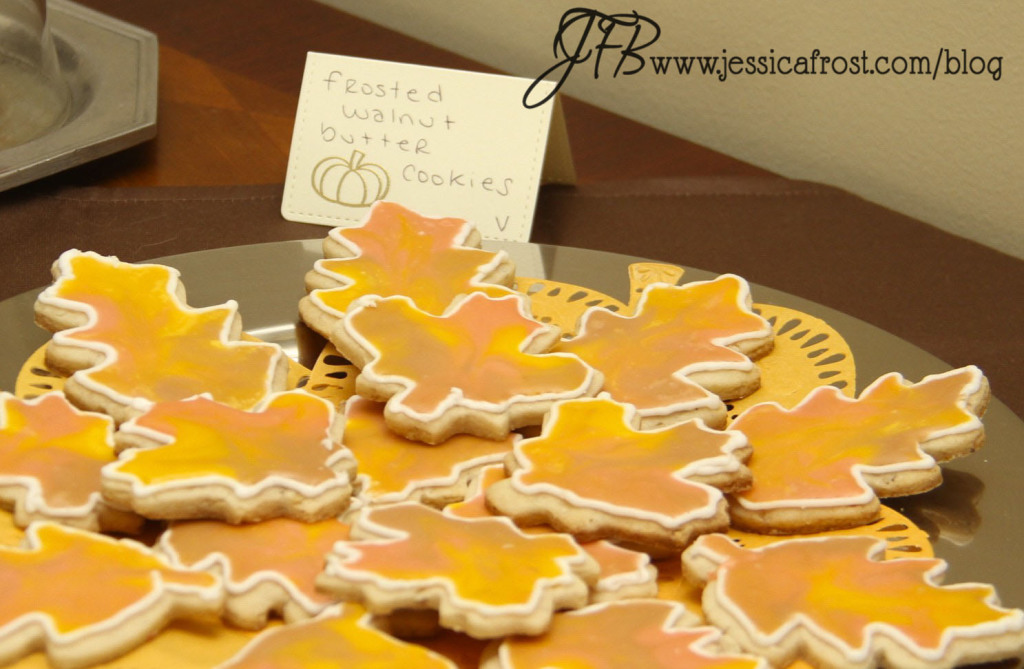 Overall I was really happy with the way everything turned out.  Usually I forget to put something out on the table or burn something…I was thrilled that I just forgot to cut up an apple for the pumpkin dip.  I can live with that.

Oh, and because I can’t resist making a card, here’s the card I created for Heather’s gift: 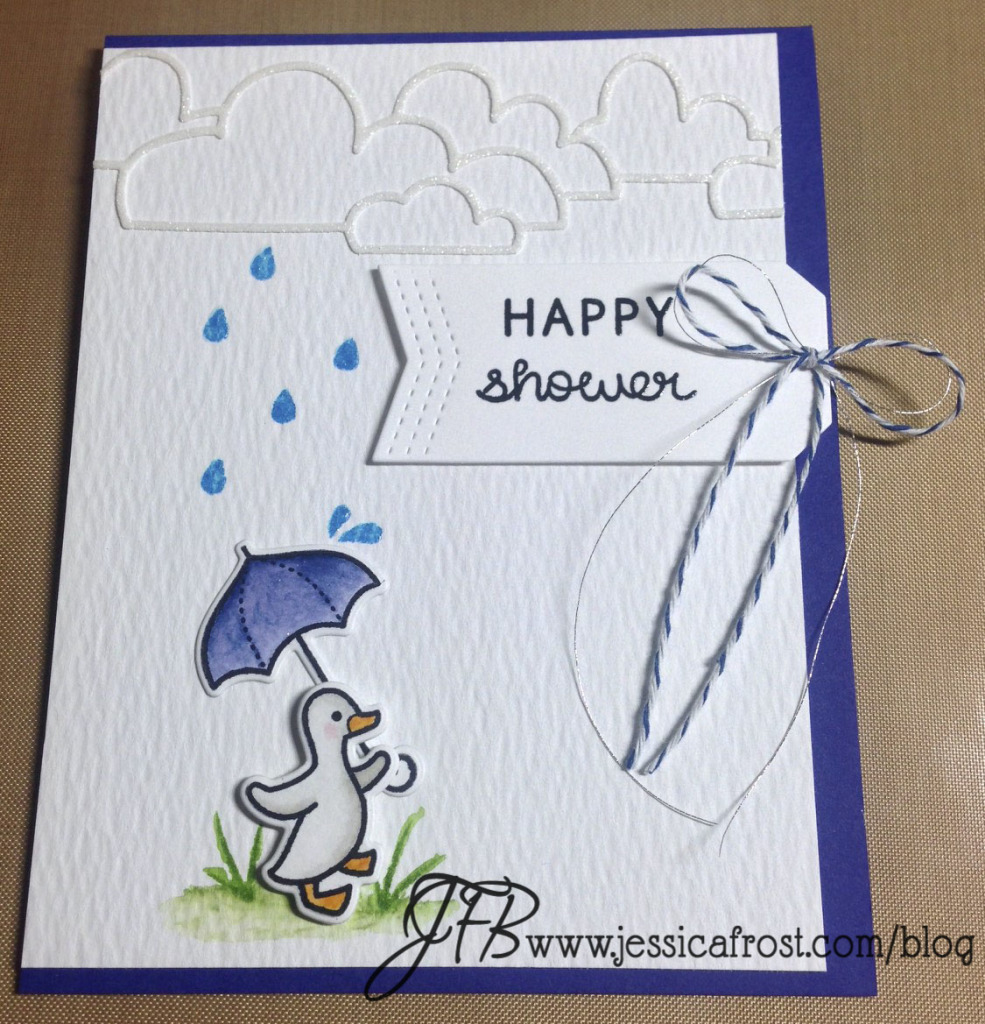 It was a great party and I really enjoyed having the honor of throwing it for her.  It was fun meeting some of her other friends and also seeing family members who I haven’t seen since her wedding in 2007.  Heather received some beautiful gifts and her son (and nursery) is going to be quite stylish!  I can’t wait to meet him in just a few short months!! 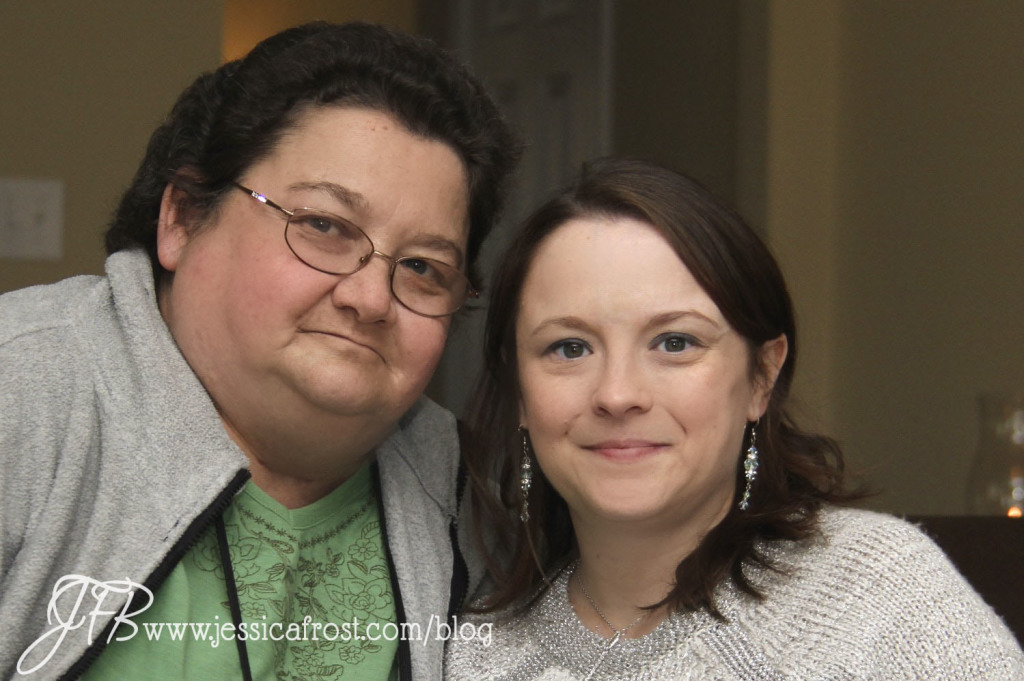 Heather and her mom, Cindy 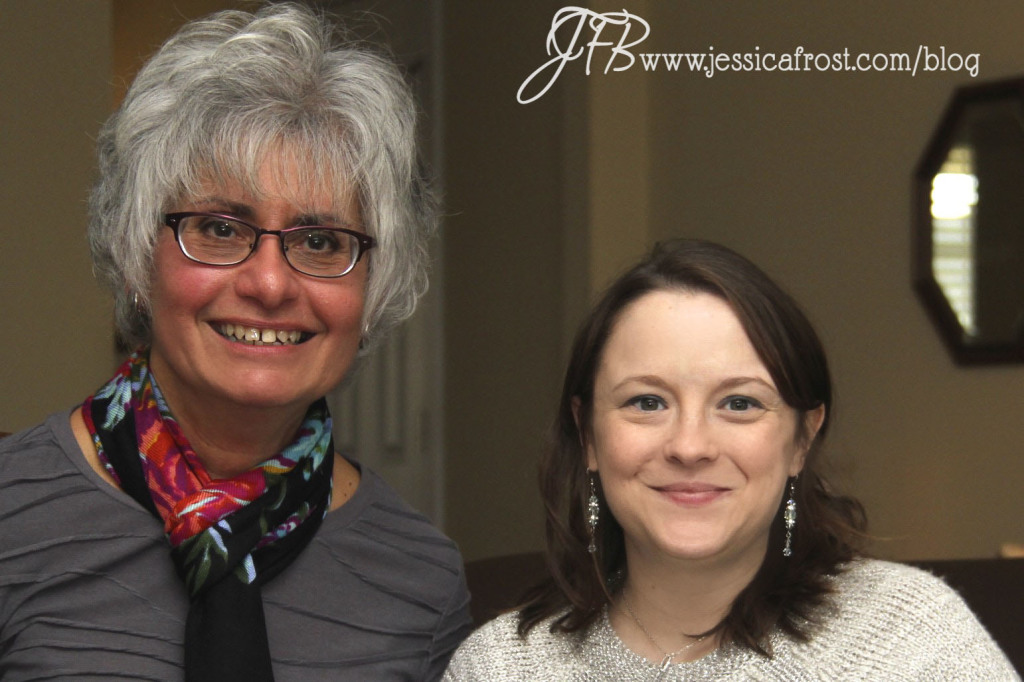 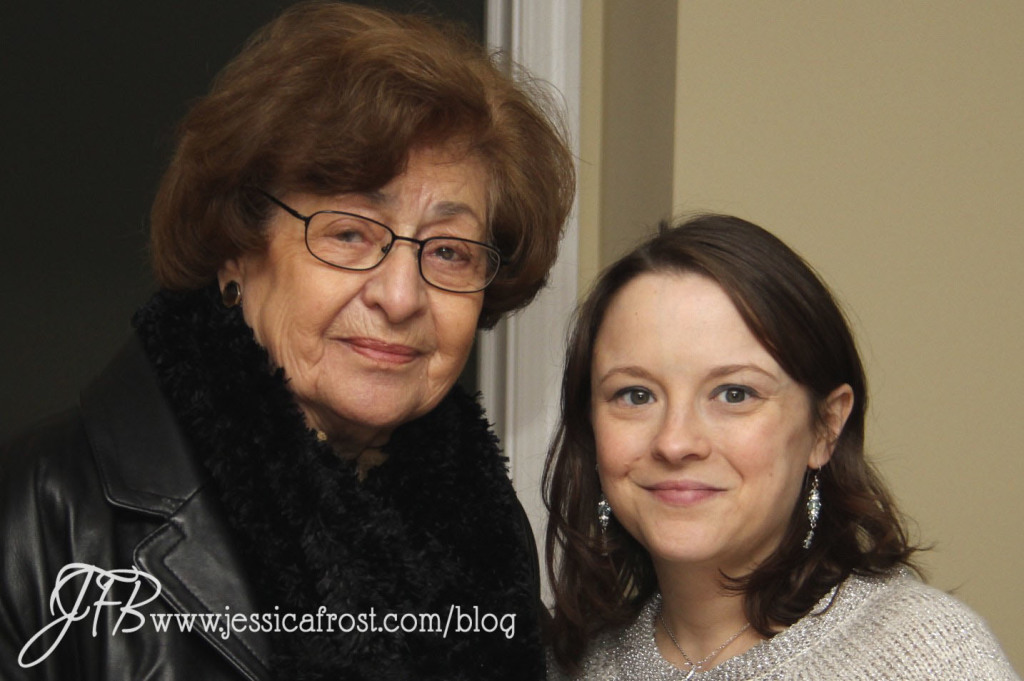 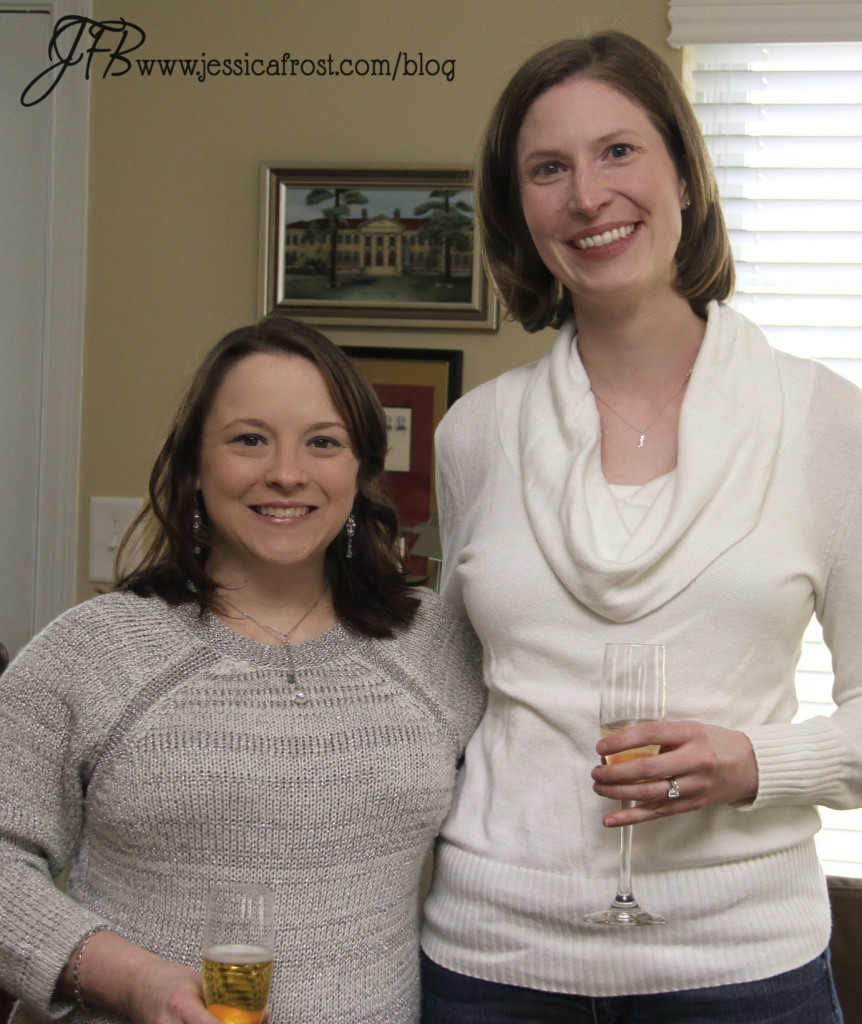 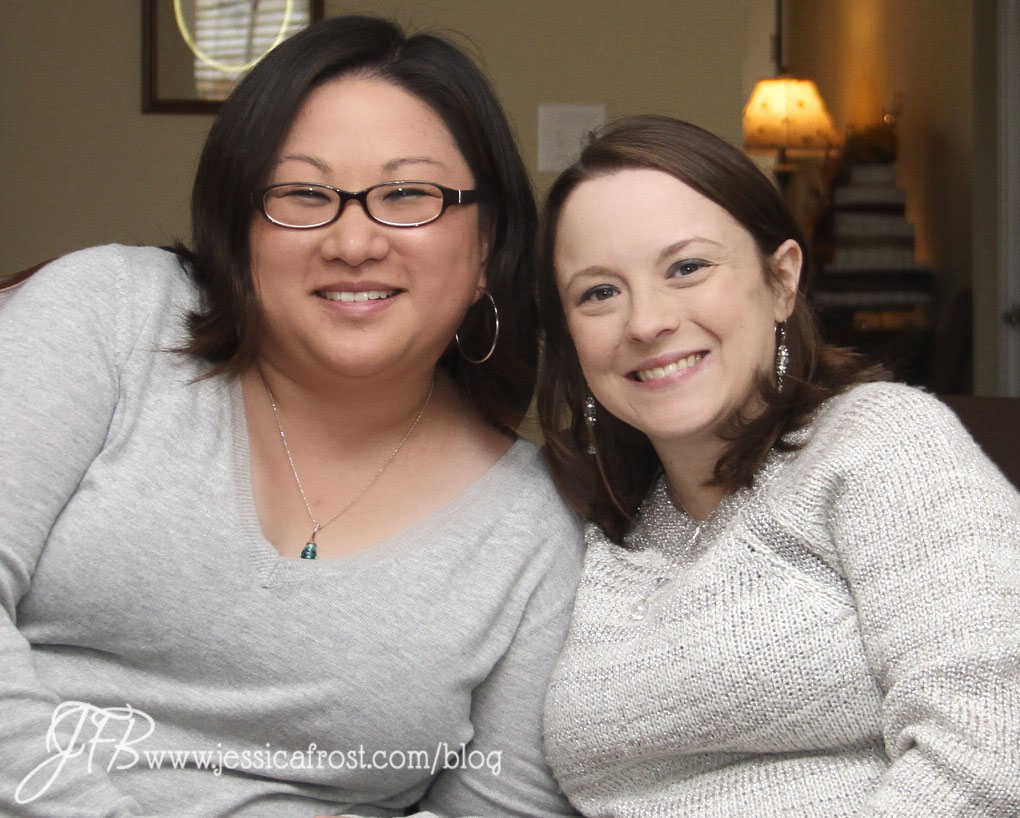