I have a book of Japanese fairy tales and one of my favorite stories growing up was about tsuki no usagi.  To summarize, once upon a time the Old-Man-of-the-Moon looked down and saw a rabbit, a monkey, and a fox living together in a forest.  He wondered which of them was the kindest and decided to go down and find out.  So he changed himself into a beggar and found the three friends.  The beggar exclaimed that he was hungry and asked for their help finding food.  The three animals immediately went off to find food for the beggar.  The monkey brought fruit and the fox brought a large fish, but the rabbit couldn’t find anything.  However, the rabbit got an idea and asked the fox and monkey if they would help him.  He asked the monkey to gather firewood and asked the fox to build a large fire with the wood.

After I heard that story I used to look for the rabbit in the full moon.  I much prefer the idea of a rabbit in the moon to a man in the moon…so when I saw that this week’s Simon Says Stamp Monday Challenge was based on the moon I decided to try and create the tsuki no usagi or moon rabbit! 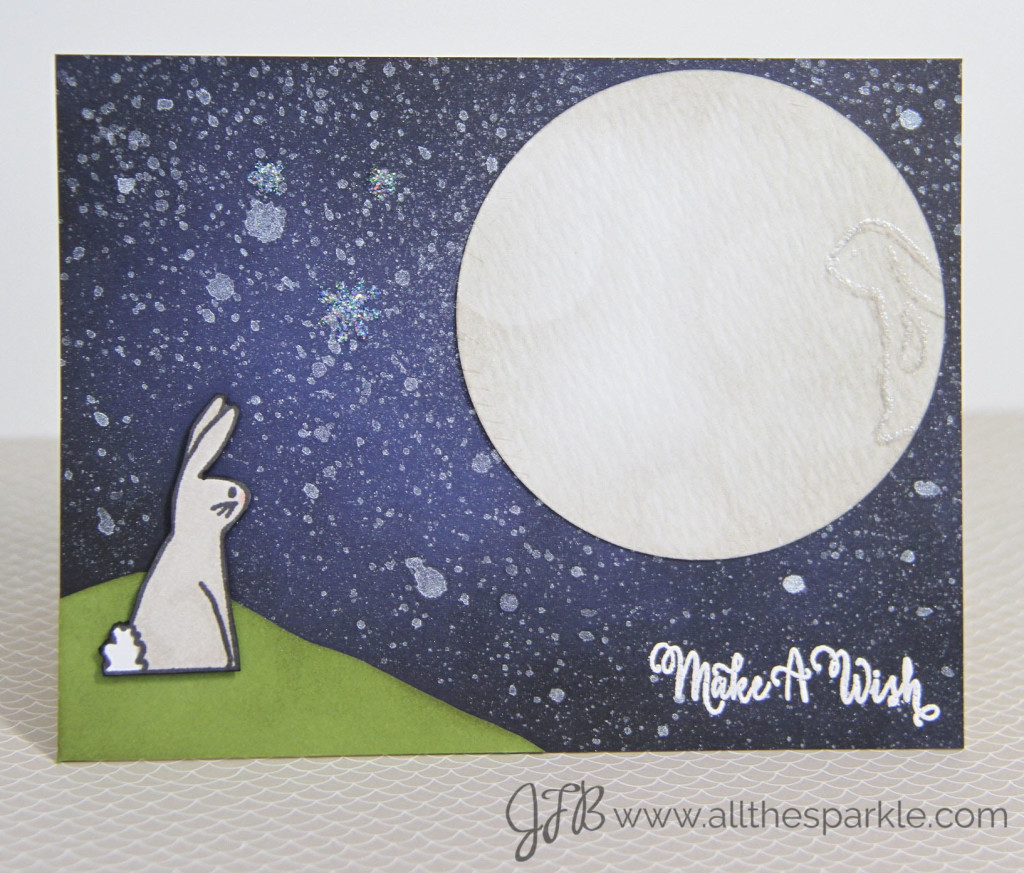 I started off by cutting a large circle out of watercolor paper.  I used the textured side so that there would be dimples in the moon.  Then I took a few smaller circles cut from post-it tape and placed them randomly around the circle to create craters.  I used pumice stone distress ink and a mini ink blending tool to add shading around the masks.  After I removed the masks I thought the white was a little too bright so I added additional pumice stone ink over the entire moon to soften the shadows.  It’s subtle but I think it really creates an interesting effect.  To create the rabbit I stamped the rabbit from the Avery Elle Storybook set onto the moon with pumice stone distress ink.  Then I took a small damp paintbrush and softened the outline of the stamp.  Finally I stamped the same image again with versamark slightly off center from the original and heat embossed it with Wow blue pearl embossing powder.

To create the sky I took a piece of dark blue cardstock and blended distress inks in chipped sapphire and black soot onto the edges.  Then I spritzed and sprinkled it with Tsukineko spray in frost, pearlized water, and plain water to create the stars.  I added the hill from a piece of green cardstock shaded with peeled paint distress ink.  I heat embossed the sentiment with white embossing powder.

The rabbit on the hill is from the Avery Elle More Stories stamp set and was colored with copic markers.  I fussy cut the rabbit and outlined the edges in black marker before adhering him to the hill with foam mounting tape.