This is my second post today…if you’re looking for Christmas Card Challenges please scroll down or click HERE! 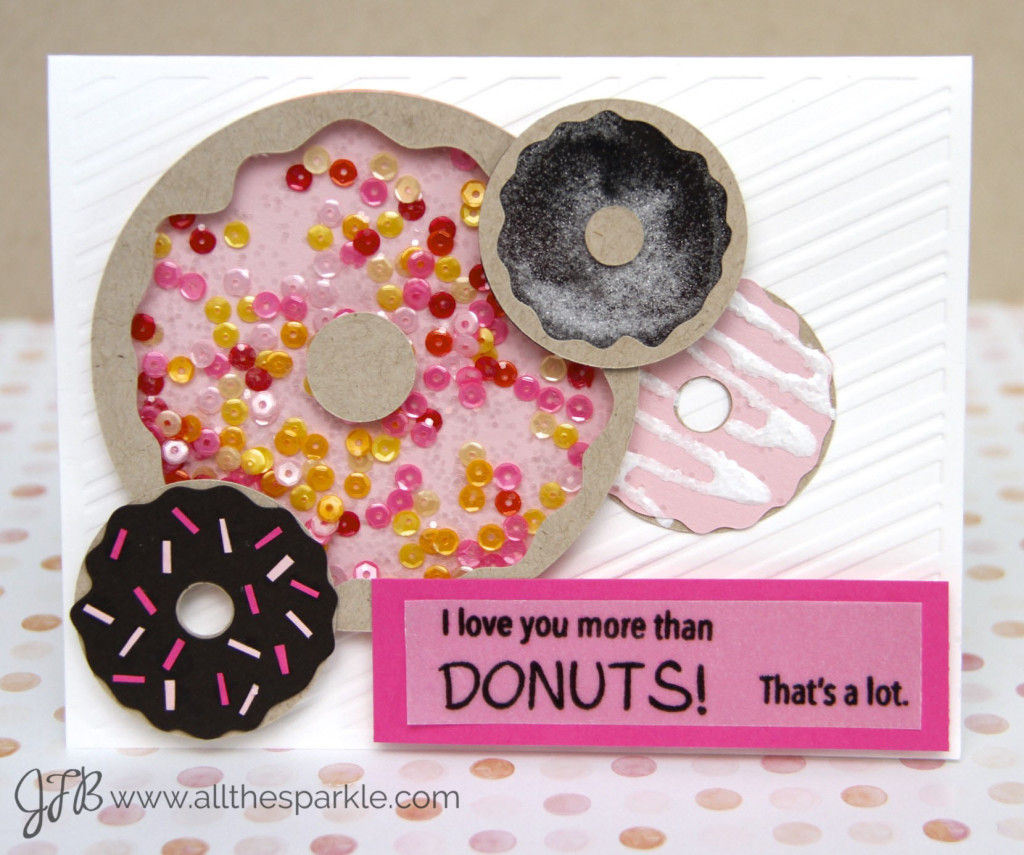 It’s time for a new Curtain Call Inspiration Challenge and I’m super excited to be their guest designer for this challenge!! 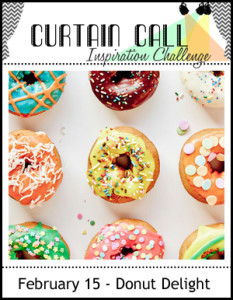 The LEAD of Donut Delight will be invited as a Guest Designer in our next challenge!

When I saw the inspiration photo I’ll admit that I was stumped for a day or two…donuts are super trendy right now (not just in the crafting world!) and I really wanted to look more at the colors and various patterns of the donut toppings for inspiration rather than just doing a donut-themed card.  Ha…but after staring at sprinkles and frosting I gave in and decided to just DO donuts!  I may or may not have taken a trip over to Naughty Girls Donut Shop for additional donut “inspiration”…

Unfortunately I don’t own any of the cute donut themed dies or stamps at the moment so I found a donut cut file in the Silhouette library and used that for my die.  I knew I wanted to make one of the donuts into a shaker so I cut one large donut and several smaller ones. 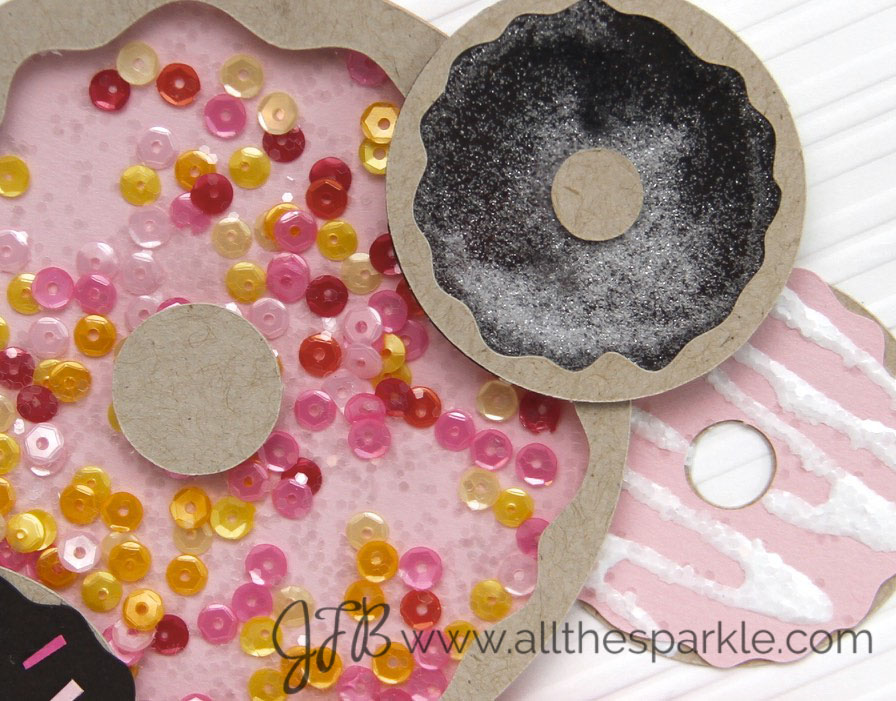 For the large donut I was very inspired by the look of the donut in the bottom row, center column!  I created a shaker card and filled it with Pretty Pink Posh sequins and Martha Stewart coarse glitter.  I also glued a few sequins scattered around the “frosting” so that when the card was being held all the sequins wouldn’t fall to the bottom.

The next donut I created was the chocolate sprinkle donut.  I cut and glued small strips of pink papers to create the sprinkles.  It’s not very obvious in the photo but I also applied glossy accents to the strips so they’d stand out a little more.

The third donut is the strawberry frosted donut with the vanilla glaze…(I’m REALLY craving donuts now…)!  The glaze was created with the Irresistible Pico Embellisher in Wedding Dress.  I also sprinkled some coarse glitter onto the glaze while it was wet.  The embellisher creates a raised effect which looked surprisingly realistic when it dried!

The final donut on the card is meant to be a cookies and cream/Oreo topped sort of donut.  It’s also a shaker and it’s filled with fine white glitter and just a pinch of brown glitter.  Before sealing the shaker I also tried to create a little texture in the chocolate frosting with copic markers but it didn’t really show up under all of the glitter.

To assemble the card, I cut and scored a top-folding card and then ran the card front through my big shot with the Cuttlebug Candy Cane Stripe embossing folder.  I adhered the large donut with my Tombow stamp runner and then adhered the smaller donuts with foam mounting tape for a little extra dimension!

I created the sentiment by stamping part of the sentiment from the Simon Says Stamp Ice Cream Dream set (it was part of the 2014 August card kit) but I used Jessie’s ABCs from Lawn Fawn to spell out the word ‘donuts’ instead!  I stamped it on vellum with Versafine Onyx Black and heat embossed it with Hero Arts clear embossing powder.  I matted it on Simon Says Stamp Doll Pink card stock and then adhered it to the card with foam mounting tape!

Finally it was photo-taking time…I really struggled to get a photo for this card and I finally came up with a trick for photographing shaker cards.  I hate that the sequins always fall to the bottom of the card but I also don’t always like just taking a photo of the card flat on the table.  So here’s my cheat! 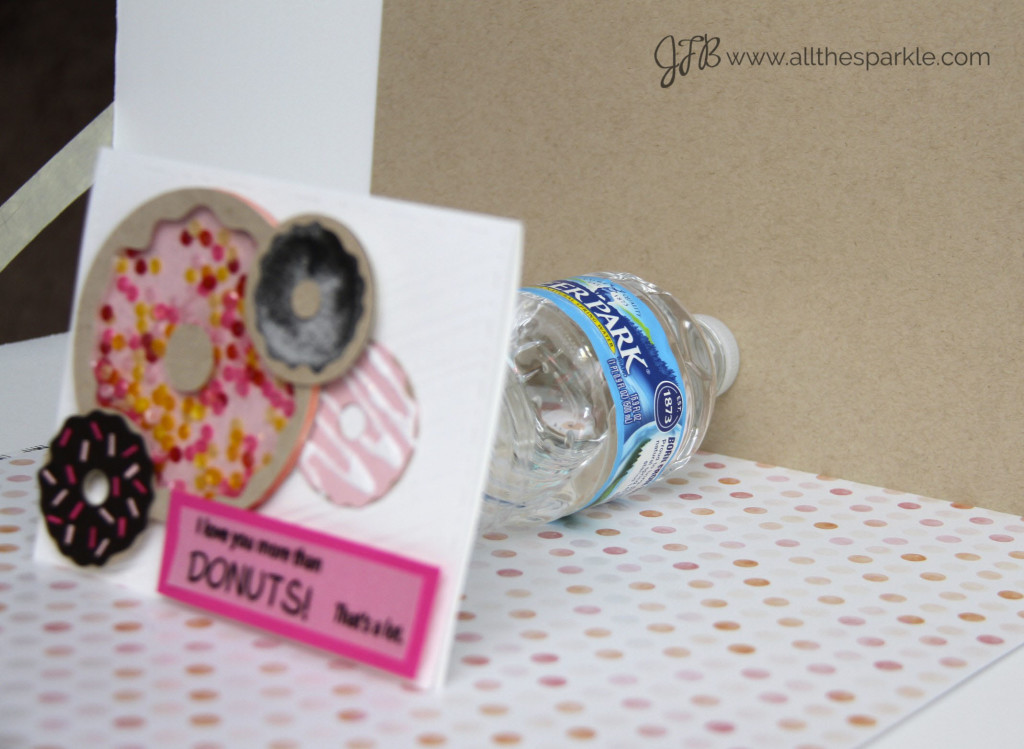 My makeshift photo set-up is actually tilted so that the kraft backdrop is actually horizontal and the polka dotted paper is vertical and my card is held up by a water bottle.  This allows the sequins to stay across the entire card while still giving the depth and dimension of the backgrounds.  That exact set-up yielded the first photo in this post!  The idea still needs a little tweaking but I really like the way the photo turned out!  You can see the comparison below of photographing the shaker card flat (left) versus the “waterbottle raised” card (right)…I know, I know…very technical name!  I couldn’t get the lighting right so the card on the left is bad for several reasons but I feel like the card on the right has more depth, interest, and looks more realistic.  So yeah, that’s my very off-topic, totally basic photography tip of the day!

It was a lot of fun creating paper donuts (I actually made three others that just wouldn’t fit on the card) and I look forward to seeing how everyone else will interpret the challenge!  Thanks again to the Curtain Call Design Team for having me and if you’re visiting my blog for the first time, thanks for stopping by!!

Make sure you visit each of the designers’ blogs for more inspiration!

Stop by the Curtain Call Inspiration Challenge:  Donut Delight for the challenge details and to play along with us!