Whew, after a week of deliberating and second-guessing myself, the lights are all ordered and on their way!  My biggest problem was the foyer chandelier.  For months I’ve had my heart set on this gorgeous West Elm capiz chandelier: 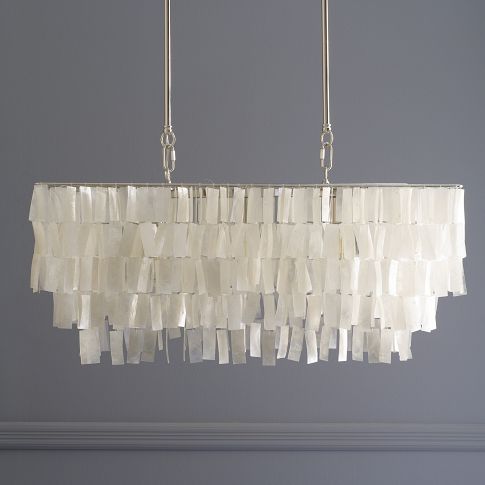 But I knew it was large and came in several large packages and so, for the sake of our house not being overrun with boxes, I decided to wait before purchasing it.  It’s one of their most popular items so I didn’t even consider that it might not be available when I needed it.  Early last week our builder said it was time to start getting our lights.  I had just gotten an email from West Elm regarding a big sale they were having so I was all set to make my purchase.  In fact, the email from West Elm announcing the sale had the photo of my beloved chandelier as it’s cover photo for their lighting department.

And so I clicked through the email…and it wasn’t there….

It was NOWHERE to be found on their website but I found an old link for it through Google and it came up as ‘no longer available.’  I was beginning to have a mild panic attack so I called their Tyson’s Corner store expecting to make a drive up there that afternoon to hopefully purchase one in-store.  And they didn’t have any…and had no plans to receive any in the near future.  And their main call center said there were no more left.  And the outlet store said there were no more left…and further made my day by telling me that they had just been discontinued as of the middle of June.  So I missed it by like 4 days…

Most depressing afternoon ever…

So I started researching other capiz chandeliers online.  The main reason I loved the West Elm chandelier was the rectangular shells and everything I was finding online was round.  And also significantly over my budget…like 4 or 5 times my entire lighting budget.  I particularly liked one listed at $4,500.

And I finally found a vendor on Etsy who makes custom capiz chandeliers and ships them from the Philippines.  It was a little more than I would pay for the West Elm Chandelier (especially when considering the shipping to get it here) but the work was stunning.  The only problem was that it would arrive a little too late for our builder’s timeline but I was hoping that we might be able to make it work anyway.

At the same time that I was considering the custom chandelier I was also considering the same West Elm chandelier as my original favorite but in a dark grey rather than the white.  I had several concerns mostly stemming from the color.  It’s hard enough to judge a shade of white in online photos but it was almost impossible to tell the actual shade of grey in the chandelier.  So I decided to go ahead and order one just to see it in person…I could always return it if I decided to go with the custom order.

So it arrived Saturday morning…and it must be fate.  It’s PERFECT.  It’s a beautiful shade of grey (not nearly as dark as the picture below makes it look) that matches/compliments my counters and backsplash amazingly well!  And since we’ll be painting the walls a light silvery grey it should look gorgeous in the foyer and through that big beautiful transom window! 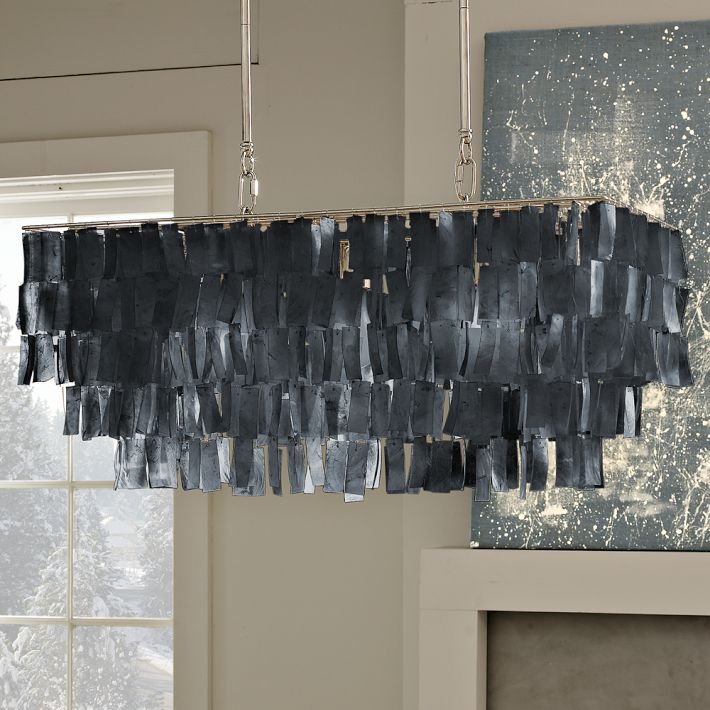 I still might custom order a piece from that place in the Philippines someday but for now, I’ve got my capiz chandelier.  The entire process didn’t go quite as I had originally intended; but I guess, sometimes, things are just meant to be!